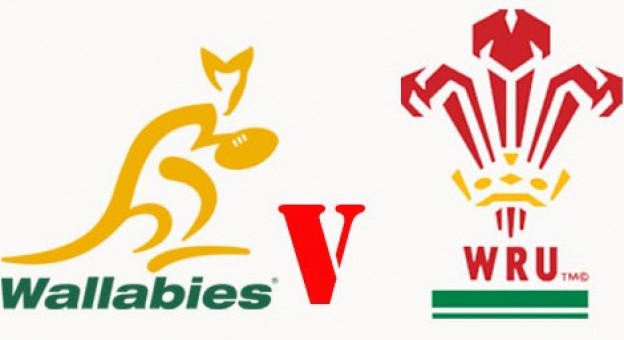 The long Welsh Australian rivalry continues. The Wallabies have dominated this contest and most pundits have predicted this to continue. Wales, I’m sure, have other plans.

A great half of rugby from both teams with the Wallabies leading on the scoreboard and have most of the play and possession. Australia scored three tries to one with the first to Tatafu Polota-Nau who drove a lineout maul ten metres to score in the right corner. The second to Adam Coleman running the hard line and catching a beautifully timed  ‘flat’ pass from Will Genia and scoring untouched while the Welsh defence pleaded for a forward pass. The third to Michael Hooper after the Wallabies stretched the defence to the right, then to the left before going back to the right. Hooper had the ball at full pace with a retreating defensive line and that was all the space he needed to dot down in almost the same spot as the first two tries.

Wales scored their try from the same type of play as Australia’s third try. They had a half break down Australia’s left wing to draw Australia’s cover defence, then immediately move the ball to the other wing where Steff Evans accounted for the scrambling defence of Kurtley Beale. Leigh Halfpenny slotted two penalties and Reece Hodge kick one magnificent penalty from touch 51 metres out to leave us with a 22-13 halftime score to Australia
Embed from Getty Images

Wales dominated possession in the second half but it was Kurtley Beale who sneaked a steal in a tackle near the halfway line and was halfway to the tryline before anyone realised he had the ball. After a video replay so that everyone else could figure out what had happened Foley converted to take the score out to 29-16. Michael Hooper took a yellow card for his team’s repeated breakdown infringements with 13 minutes to go, but Wales couldn’t take advantage of their scrum advantage and they went scoreless for the ten minutes of the yellow card. It wasn’t until the final moments of the game that  Hallam Amos was able to dive over in the corner despite a great tackle from Korobette.

It was a game of two halves to quote an old cliche. But it wasn’t enough to change the result. Australia scored four tries to two and was in charge fror the entire game.

Will Genia was everywhere and played the entire game. He sniped, passed accurately and was a constant threat.

Tatafu Polota-Nau had a huge game only blotting his copy book with one crooked throw. Reece Hodge’s long distance shots would be making teams rethink a couple of their stratagies.