Okay, I’ll admit it, Marika Koroibete’s hit on French captain and big girl’s blouse Anthony Jelonch was slightly high and deserved a yellow card. But the actions of France’s captain Anthony Jelonch in the next five seconds deserve international condemmation.

Firstly, he grabbed an unrelated part of his face, and secondly he fell to the ground screaming for attention like a five-year-old in the playground who’d burned his bot bot on the slippery slide. It was a seriously shameful display that should taint the rest of his career.

So shameful that Australian rugby has decided to fight the bullshit charge bought against Koroibete at the judiciary and I, for one, applaud their decision. The low act backfired as the Wallabies steeled their resolve and won the game despite plying one man down for 75 minutes.

The Wallabies’ celebratory mood quickly turned to plans to clear Koroibete, who could miss the opening Bledisloe Cup game on August 7, and several games of the Rugby Championship, with a suspension. Wallabies officials spent Sunday afternoon analysing footage and consulting with their legal team.

At a World Rugby judiciary hearing on Monday night, the Wallabies will argue Koroibete’s tackle was not worthy of a red card and therefore, the winger should not face further sanction.

Sources familiar with the defence strategy told the Herald it will be based on two arguments, which both counter referee Ben O’Keeffe’s ruling that there were no mitigating factors for the head contact. Mitigating factors could have reduced Koroibete’s red card to a yellow card.

First, they will use camera angles which show there was significant mitigation as Jelonch dropped his body height and ducked his head in the moments prior to the hit. And secondly, several angles also show clear separation between Koroibete’s shoulder and Jelonch’s head at the first point of contact.

“We feel we have a really good case to take the judiciary to be heard. Because we feel there was mitigation involved in this. And we don’t believe there was direct contact to the head,” Rugby Australia director of rugby Scott Johnson told the Herald.

“We’re going to do this properly. We owe it to Marika. We want to have a good look at this and ensure he gets the right hearing. He has a right to that and a right to be heard.”

Tupou goes back to back!

The biggest award in Queensland rugby, the Stan Pilecki Medal, was won by Taniela Tupou for the second year in a row. This from the media release.

Taniela Tupou has etched his name into Queensland Rugby’s history books after being voted by his team-mates as the St.George Queensland Reds best player for a second-straight year.

The award is named after the late legendary Queensland prop Stan Pilecki – the state’s first centurion.

“It means a lot to me. I’m just happy, we all worked hard and I’m just the lucky one to get the medal,” said Tupou after being awarded the medal this afternoon.

“I couldn’t have done this without the boys. Without them I wouldn’t have been able to win this. To know they’re your mates, your team-mates and they trust in you and have faith in you means a lot to me. I love playing with them and hopefully we can do it again next year.”

Tupou was presented the medal at Queensland’s end of season Awards Lunch held at Sirromet Winery this afternoon, where two other awards were presented with Ryan Smith named Rookie of the Year and Angus Scott-Young was recognised as best displaying the Spirit of the Reds.

The team also recognised a number of other achievements from the 2021 season including nine Queensland debutants and six players who celebrated their 50th Queensland cap.

Alun Wyn Jones Is Back! 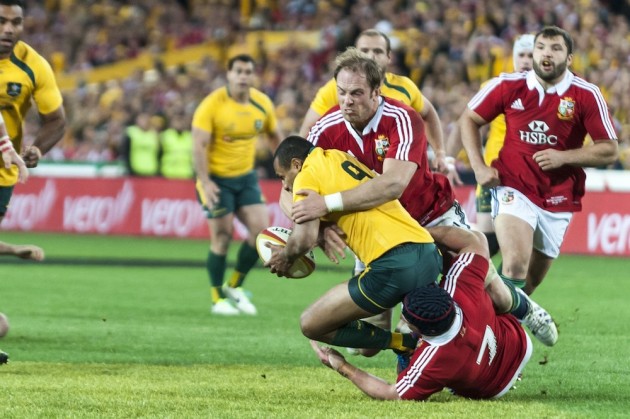 Get this! Just three weeks after the dislocated shoulder that was supposed to end Jones’ BIL career, he’s back on tour, has played a game, and has been reinstated as captain!

Warren Gatland delivered a clean bill of health on Alun Wyn Jones after the British and Irish Lions captain made a successful comeback in a 49-3 win over the Stormers in Cape Town.

Three weeks after dislocating his shoulder against Japan at Murrayfield, Jones played 27 minutes as a second-half replacement to complete what Gatland described as a “miracle recovery”.

The Lions’ forward talisman made seven tackles and gained four metres from five carries to give his shoulder a solid test seven days before the series against South Africa begins.

“Alun got a few shots on and defended well. There were a couple of touches in there as well,” the Lions head coach said.

“The big thing for him was to get through that period and see how he was afterwards. I haven’t really had a chat with him, but he wasn’t out there for a long time. We just wanted to see how the lungs were.

“I know how hard he has worked over the last year or so, he was desperate to make the Lions.

“In 2017 he probably wasn’t at his best but has really been exceptional in the way he has prepared for this tour.

“It was a shame he picked up the injury, but it’s great to have him back. We’ll have that discussion about whether there’s a role for him as a starter, bench player, or if he’s not involved next weekend.”

White will be available for the first Bledisloe.

White’s absence from the first three has given Jake Gordon and Tate McDermott a chance to see how the wallabies number nine jersey fits. While I believe Gordon’s jersey didn’t fit that well, McDermott’s looked like he was born in it.

White is a better half than both the younger players at the moment and could possibly slot straight back into the starting role despite two months of no rugby.

McDermott produced two important cameos from the bench before being promoted to the starting side, where he successfully transferred his second half play to the first 72 minutes of the series deciding win at Suncorp Stadium.

The Queenslander’s ability to clear the breakdown quickly and constantly threaten the defensive line with his running game added a new element to a Wallabies attack, which looked far better in the third Test than it did in the two preceding matches.

White arguably provides the best of both worlds. His core skills are better than both McDermott and Gordon and the Wallabies were at their best last year when his running game picked holes on either side of the breakdown.