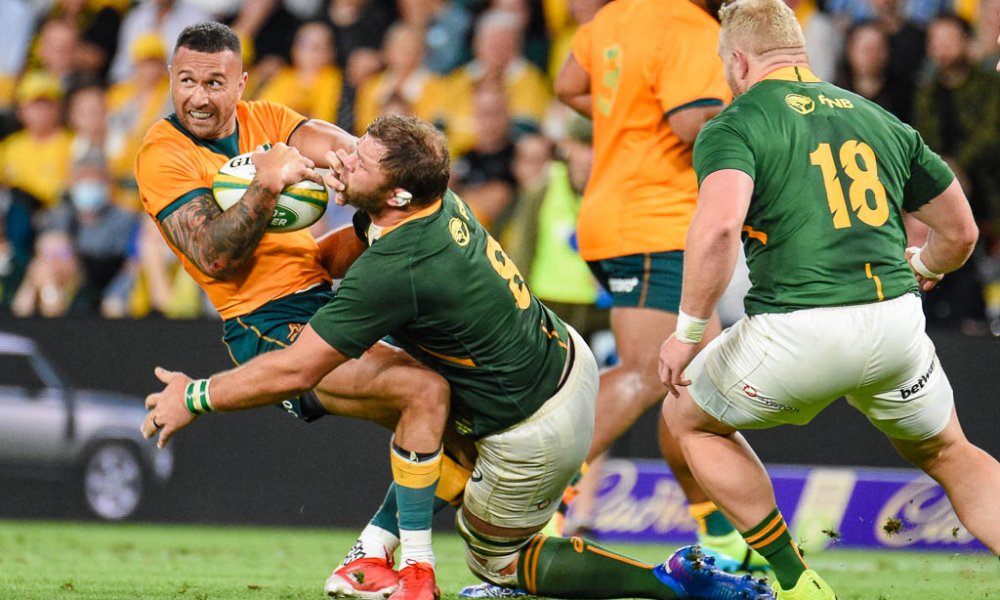 G’Day GAGR’s! Well, what a difference a fortnight makes. Two wins in a row against the world champion Dutch Dirt Farmers, has certainly bought about a positive attitude amongst us poor, long-suffering Wallabies fans. Also, two bot-bot spankings from the Nearlies against the FISM’s, has us all wondering what the next weekend will bring. So buckle in for a wild ride as you brave GAGR’s get the world according to your writer north of the Mason-Dixon line, BrisneyLand Local.

Sean McMahon – the Fittest in the Wallabies Squad!

For a long time Sean McMahon has been watching the Wallabies all the way from Japan, but the talented back-rower who was discarded by Voldemort (The previous coach who shall not be named – also known as the Ass Clown) has seamlessly fitted back into the Wallabies set up. Three years playing with Suntory Sungoliath has helped McMahon bring a new level of discipline to himself and his game.

Uber workouts within hotel quarantine has honed and chiselled McMahon to be “the fittest in this team” according to coach Dave Rennie.

“Japan has done wonders for me (and) for my body,” he told reporters on Monday.”I’m feeling fresh, and it’s been good for me up in Japan, do a lot of running over there, it’s very fast game, and I am looking forward to the contact side of things back at international level to see if I’m still capable of standing up with the big dogs.”

We haven’t seen McMahon in a gold jersey since November 2017, in the match against Scotland. And let’s just say that the Wallabies squad has changed a lot since then. “Nearly classify myself as an old bull now that there’s so many young faces around,” he joked. “There’s plenty of competition especially in this environment at the moment, a lot of youth, and then you’ve got the experience of Hoops (Michael Hooper).

“It pushes you to want to learn quickly and get your head around everything. Those boys have been more than willing to help me out and try to get my knowledge up to speed as quickly as possible.”

“Everyone misses throwing on the gold jersey when they don’t have the chance to put it on anymore,” he said. “Dave and me were talking on and off about trying to get me back and things just kept falling out of place with things in Japan, Australia, stuff like that … COVID didn’t help, that’s for sure. “It’s always nice to know that there are people and coaches around that still want you to be back and … have a crack.’

Well I don’t know about the rest of you GAGR’s, but this little black duck is stoked to see a certain Mr McMahon back in the mix, and I sure as heck hope he gets a run on against the FISM’s, where his style of play will really suit combating the more free flowing Los Pumas. Fingers crossed.

Argies Crapping themselves over Samu Kerevi

Well, it turns out our Argentinian friends might be a little worried about the rampant return of one Mr Samu Kerevi. Ex-Wallabies, and now FISM’s head coach, made the following comments.

“Samu makes such a difference. He brings such a physicality and go-forward that he sets up the platform better than forwards,” Ledesma said. “You can see why they set up every play off him from set piece or as a dummy runner. He really dominates the centre.”

Mario surmised the difference between the Wallas now versus our two draws with them last year.  “We are playing a different beast than last year,” Ledesma said. “We are playing a team that is really confident and dominated the world champions.” “Obviously, it is the cattle, as you like to say over here in Australia. That’s really important.”

Samu Kerevi wasn’t his only concern, with QC2.0 coming in for a mention.  “I think what we are seeing is a different maturity. Maybe, because of age, he is playing much more for the team. He has had two very good games,” Ledesma said of Cooper.

So GAGR’s this test in North Queensland is going to be a belter. What’s everyone’s thoughts on what the Wallas squad will look like?

Out of the frying pan into the Braai

Well, this coming weekend’s game is likely to see our beloved DDF’s in more shite than the early settlers! In the last two games against the supposed struggling Wallabies, the Bokkies, who were going to use this as a warm up for the Nearlies, were outplayed, outmuscled, and out smarted by our beloved Green and Gold.

BL’s prediction is that things are only going to get worse for the former World’s No. 1 team. And let’s be honest, the Saffa fans and media have given their Bokkies a fair savaging.

“Captain Siya Kolisi promised the side would be better than the previous week, where they lost to the same team, but this performance was arguably a lot worse, as the Boks defence fell to a shambles and the scoreline flattered them in a contest that made the Wallabies look like world beaters,” spewed Brendan Nel of Super Sport.

“Their missed tackles and ill-discipline were a feature in the opening stages of the game, with scrumhalf Faf de Klerk being sent off in the opening quarter for a beyond silly cynical infringement in the Boks’ 22 right in front of the referee,” mused IOL’s Wynona Louw. “It turned out to be another poor defensive display from the South Africans as they missed 19 tackles. Last week, the tally was 21.”

After their games against the BIL’s and the FISM’s, the South African’s thought their game was in a pretty good position. The Wallabies put paid to that, and I am predicting that is nothing compared to what the AB’s will do to them.

One wonders if the coaching brains trust of the Bok’s thought that after the BIL’s, all teams would attempt to play their type of horrific boring ruggers? Let’s hope Jacques Nienaber has something else up his sleeve, or we are going to see an absolute cricket score when the Sheep Lovers get a hold of them.