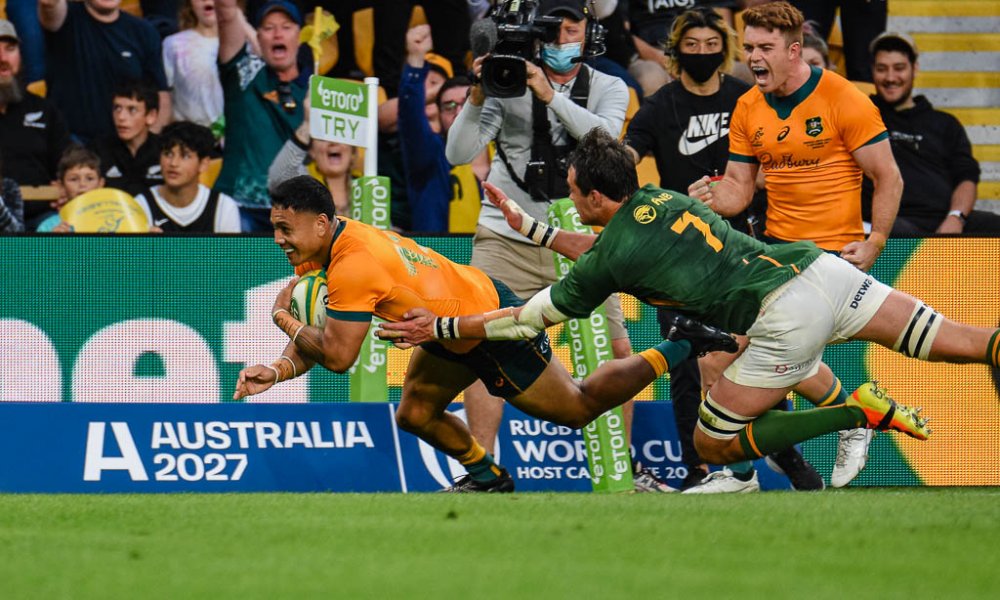 22-year-old centre and Brisbane boy Len Ikitau has been quickly locked into a contract extension by the Brumbies and Rugby Australia until the 2023 Rugby World Cup after his two-try rampage against then World No 1 South Africa last Saturday.

Nathan “True Blue” Williamson reports that Ikitau was quick to deflect praise when speaking to media on Tuesday.

“I scored two tries but they were team tries, I guess I was just there in the right place,” Ikitau said on Tuesday.

“I feel like I’m trying to get better each week and improve my game. Everyone’s trying to push forward and be better to make the team better. There’s no one besides ‘Hoops’ who have their position cemented.”

[Should have held out for a $6M contract if you want to be un-droppable Len!]

Darcy Swain and Len Ikitau have come through the system together since their time at school at Brisbane Boys College, with Swain helping to bring Ikitau to Canberra.

“I know I have plenty of improvement left in me and Canberra is the best place for me to continue to develop my game and learn what it takes to be a professional season after season.” Ikitau continued, praising the distraction-free national capital.

“There was a couple of times I just wanted to go home and he kind of stopped me from doing that, so I’m just thankful for having Darcy there.”

Louis Lynagh, (son of Grand-Slam and Bledisloe winning Wallaby Michael Lynagh) has been named in England’s extended 45-player squad for a brief training camp to be held next week according to the ABC.

The 20-year-old outside back was born in Italy, grew up in England and plays for Harlequins in the English premiership – scoring two tries for the English club champions during their 26-20 win at Newcastle Falcons in the opening game of their Premiership title defence in June.

Louis Lynagh is eligible to play Test rugby for England, Australia and Italy.

While his selection does not guarantee he will represent England at the Test level in the future, it does show he is in the sights of its Australia-born coach Eddie Jones.

Meanwhile, the Guardian reports that George Ford, Billy and Mako Vunipola and Jamie George have all been left out of England’s 45-man training squad, but with recalls issued to Sam Simmonds and “scrum straight Joe” Marler.

In England assistant-coach musical chairs news, former Brisbane Broncos coach Anthony Seibold was appointed as England’s defence coach earlier this month. The move comes just over 12 months since Seibold’s highly-publicised exit from the Brisbane Broncos, less than two years into his contract with the club.

37-year-old 121-Test Wallaby and “probably not a bad bloke for a Waratah” Adam Ashley-Cooper has explained the reason behind using the word “transition” rather than “retirement” for calling time as a player for the Los Angeles Giltinis, according to Jim Tucker at Rugby.com.au.

“It’s a transition rather than calling it a retirement because we all know rugby players never really retire. I’d like to keep one or two games up my sleeve for somewhere, sometime,” Ashley-Cooper said.

“I’d like to finish at Norths. It‘d be a nice little fairytale to go back where it all started as a young fella nearly 20 years ago. I’m sitting on 48 caps at Norths so maybe I play two games and raise the bat.”

Last year, former Wallabies skipper Ben Mowen made a comeback with his Brisbane club Easts at 35 and led them to their first premiership in seven years.

At the same time in Canberra, Wallabies great Matt Giteau was running around for the Gungahlin Eagles at 37 and guiding them into the grand final of the John I Dent Cup.

A few weeks ago, former Wallabies skipper Stephen Moore savoured his first club premiership with University of Queensland at 38 after making a mid-season comeback to help the club through an injury crisis at hooker.

Hoping to hit the ground running, new Wallaroos coach Jay Tregonning introduced himself to his 40-player squad on Tuesday night (14 Sept) through a zoom call in what has become the new COVID-normal as he looked to allay any uncertainty around the program and lay down his plan for the months ahead.

“I don’t officially start with the Wallaroos role until October 1st, but I had a meeting with the girls last night over zoom, which was great being able to introduce myself and have a discussion about where we’re heading in the near future,” Tregonning told ESPN.

“I don’t want to reinvent the wheel with different patterns of play and throwing something that’s totally foreign at them. It’s obviously not going to be beneficial in regards to moving forward within a short time frame. So conversations were around that and just trying to ease any type of concern that they had about obviously new people coming in and having to learn everything totally new again.”

“Obviously logistically, a lot of future games and plans and tours are still with Rugby Australia, but they’re working tirelessly to try to ensure we’ve got some preparation, hopefully even before the end of the year or early next year, which would be good.”

Tregonning was part of the Wallaroos set up during the 2014 World Cup as an assistant coach and was contracted to remain with the team through to 2017, but unable to find a balance as a professional teacher and as a father to young children he stepped away from his position. He would remain in the national fold though, taking up a position as an assistant coach of the first Australian Schools Barbarians team in 2015 and then the Australian Schools Under 18s where he was part of the coaching staff of the team that famously defeated New Zealand Schools, ending a seven-year winless drought in 2019.