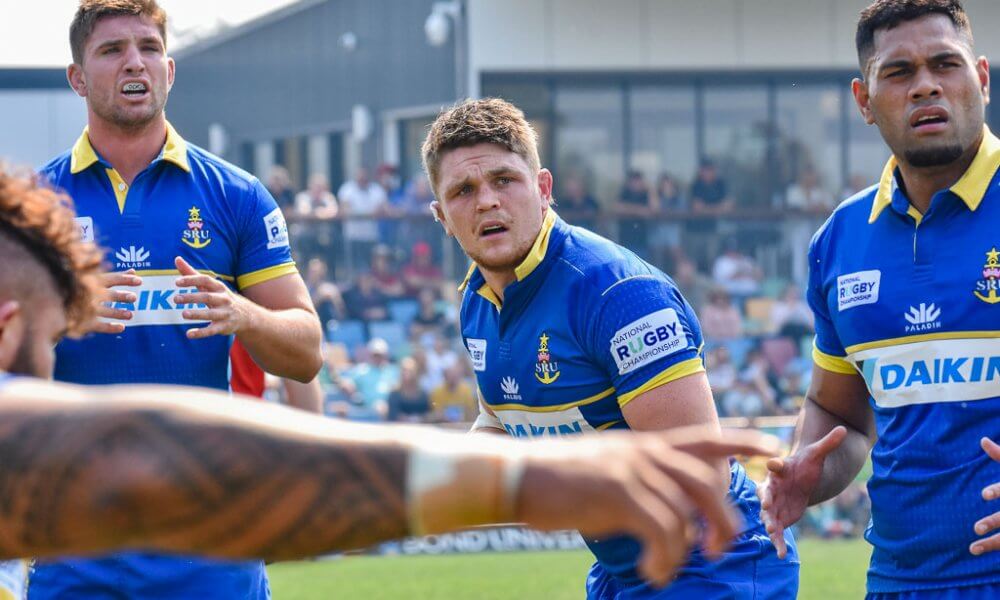 Sydney were yet to win in this NRC, having a disrupted start to the season due to the impact of the Shute Shield Grand Final and the Argentina v Randwick clash.  Meanwhile QLD Country were hot favorites on the back of their one point loss to the ladder leader Force in Perth followed by an upset win over the star-ladden Canberra Vikings.

In front of a crowd of mostly team support staff, Sydney started on fire snagging a turnover early and then taking advantage of a poor kick from Filipo Daugunu. Centre Harry Burey made a clean break straight through the QLD Country defence within a couple of minutes before off-loading to his openside flanker, Charlie Gamble to go over under the posts. Sydney 7-0

Queensland Country were struggling to get any momentum early on the back of a highly aggressive Sydney defensive approach.  It took a wonderful line by Harry Wilson, onto a deft Tate McDermott pass, to finally get them through the defence.  Queensland were then able to get their roll going and soon enough it was McDermott himself who darted over from close range to get their first for the match. 7-all.

Wilson and McDermott combined again for the next Queensland try as their white away jerseys could have had them mistaken for a Fijian team, such were their off-loads. Wilson, McDermott and Jerry Lynch all through magic passes before flyhalf Rohan Saifoloi strolled over to score under the posts.  QLD Country 14-7.

While Queensland had the lead, Sydney seemed to be better playing the better team rugby.  Their scrum held the edge and their centres in particularly were looking dangerous.  Key turnovers , admittedly of some aggressive QLD defence, were letting them down.

The combination did click on the 26 minute mark when a lineout win and combination between Lalakai Foketi and Will Harrison in the midfield, found Cam Clark in space out wide to stroll over for a try.  14-all.

They snagged the lead to their own again soon after when Foketi scored a try himself. They really did it easy with QLD Country under the pump and unable to contain the Sydney attack. Harrison got it started with a  lovely grubber through for him to chase and regather.  Ryan McCauley off-loaded in the midfield from the recycle to Gamble to draw the last line and pass to his captain to score.  Sydney were up and deservedly so.  Sydney 21-14

Sydney did it again soon after but did it even better.  In fact it was a brilliant try with Cam Clark scoring in the same corner he did not long previously. But the lead in was far more non-traditional than the previously set piece play.

Will Harrision tried to clear down field for the kick to be partially charged down.  The deflection made its way to the hands of winger James Ramm to race down field before linking with his support in field. Harrison was there to dart through and off-load only for McCauley to again off-load before the ball found its way into Clark’s hands and Sydney were running away with it.  Sydney 28-14.

QLD Country snaffled the kick off and looked set to bounce back immediately. Drawing a penalty, they opted for a lineout and drive only for Sydney to counter the maul strongly. When Queensland went wide, Ramm was able to intercept and clear the ball down field to nullify any chance of the visitors getting over before the break.

Sydney would head into the change rooms on double the QLD Country score and surprise leaders. 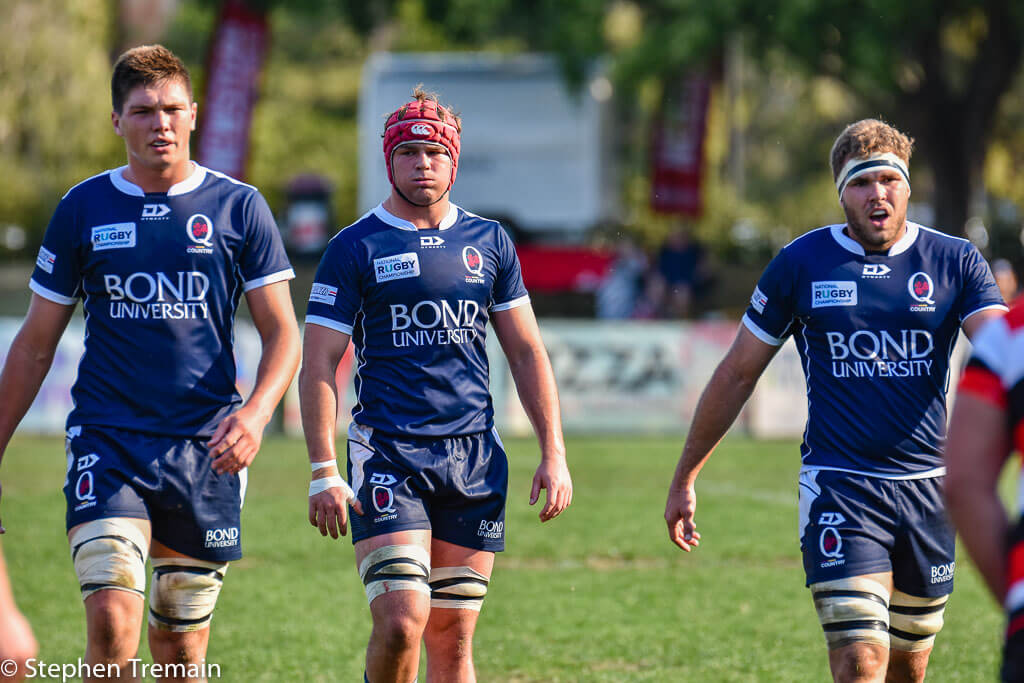 Sydney would have been confident of their chances as the 2nd half kicked off, with their 14 point lead buffered by a strong breeze at their back.

However Queensland Country were first to score through their winger Joey Fittock. It came on the back of Saifoloi dashing through the Sydney defence close to the ruck.  When Stewart was held back a penalty was on the cards but seemingly ignored. Queensland maintained composure and McDermott found Harry Hockings down the blind who set up Fitock delightfully to score the points.  Sydney 28-21.

But Sydney maintained the rage and put Queesnland under all sorts of pressure. Their scrum dominance was building and they destroyed a Country feed to snag a penalty.  When Foketi took the quick tap it looked to be the wrong decision. Thankfully, his team backed him and were able to retain possession.

QLD snagged it back at the ruck soon after, but Sydney wouldn’t let them off the hook. The visitors just couldn;’t clear and when McDermott spilled the ball and then recovered and looked to clear he muffed his chance.  The ball bobbled and sat in the in-goal for Jonny on the spot, Harry Burey, to pounce (or flop) on the ball to score a bizarre try. Sydney 35-21.

The flow just kept on coming as simple possession footy saw Jaline Graham dive over for yet another try.  It was simple stuff – catch, pass, drive and recycle and Queensland just couldn’t haul it. Sydney 42-21

While the points were coming relatively easily for Sydney, it was the might of their defence that was sealing the deal.  They were giving the Queensland Country backs absolutely bugger all space. McDermott, Daugunu, Jock Campbell, Stewart – none could find space for the first hour of the game.

Meanwhile Sydney were doing what they liked. Swinging the ball from touch-line to touch-line. Forwards playing like backs. Backs doing the tough work. Will Harrison deciding to kick across field for his skipper to grab the pill and score his second and his team’s 7th.  Sydney 47-21.

It took the unusual for Queensland Country to finally get across the line again. A quick throw in from a lineout after a Sydney cleared kick had Daugunu racing away down the sideline to draw and pass to replacement Tom Lucas to score in the corner.  Sydney 47-26

That would be the last points of the match as Sydney produced arguably the best NSW performance in the NRC for a numSydney have to back up next Saturday to take on the Drua in Fiji while Queensland Country remain on the road and head south to confront Melbourne in Wendouree. 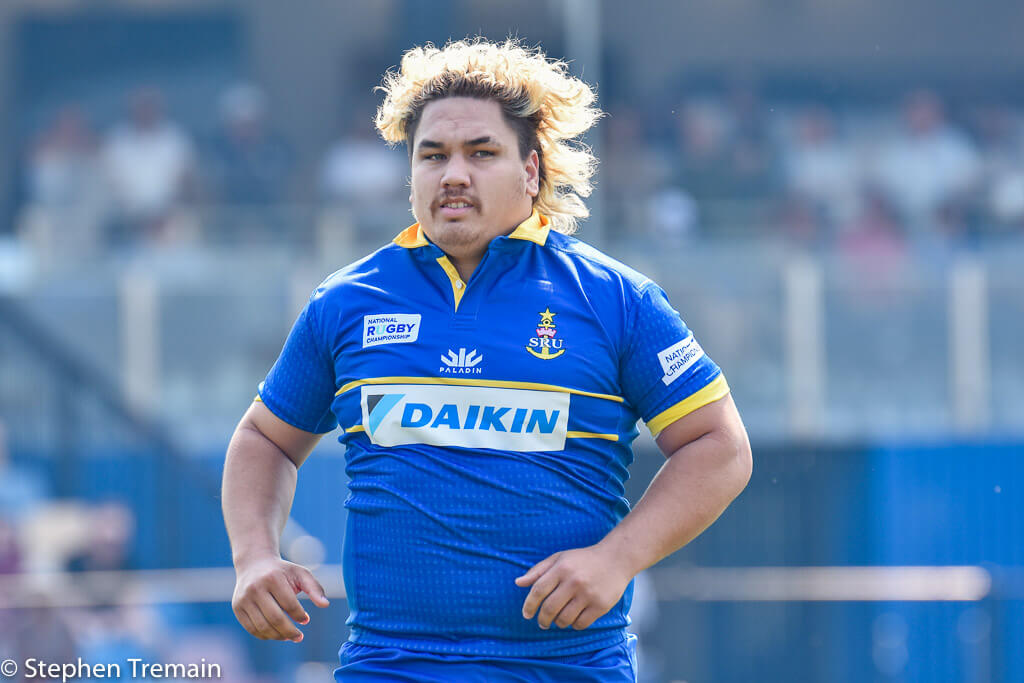 While Sydney looked the better team basically from the kick-off it was really that last ten minutes of the first half that decided the match.  When Sydney scored back to back tries, including an absolute ball-tearer to Clark.  But they then backed it about with a sustained effort in defence on their own line to keep Queensland from scoring key points before the break.

This decision is as hard as they come.  Waratahs Foketi and Swinton played big roles while Ryan McCauley stood up in a time when lock signings at the Tahs have been questioned.  But it was the non-Tahs that really won the day.  Will Harrison controlled the play superbly and kicked just as well.  Charlie Gamble, a suburban rugby player last year, was outstanding.  Harry Burey was just as good in the midfield. But for the minutes he played, the dominance he brought to the scrum and his outrageous workload and impact across the park, the winner is tight head prop Charles Abel.

As per the above, one of the real pleasing points for Tahs fans and officials would have been the new talent who stood up this game. Will Harrison continues to firm as the Tah 10 favourite for next year. I don’t know where Gamble, Burey and Abel stand in the pecking order at NSW Rugby but they sure caught the eye today.