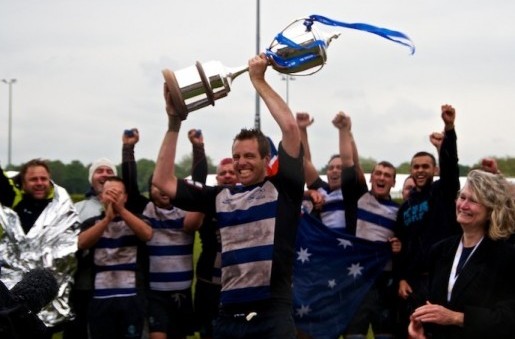 Who doesn’t love a story of Aussies bashing up Yanks and Poms, particularly at rugby? Well that’s exactly what happened just recently when the Sydney Convicts and Melbourne Chargers, Australia’s two gay-friendly rugby clubs, went over to compete in the Bingham Cup in Manchester, UK.

This thinly disguised drinking trip is actually a commemoration of the 9/11 attacks in the USA. Mark Bingham, the cup’s namesake, was one of the passengers who charged the cockpit on United Airlines Flight 93 and forced it to crash. The springboard here is that Mark was gay and was always in the closet when he played rugby until he joined the San Fran Fog, a gay-friendly team. After his heroics on September 11 his teammates at the Fog started up a tournament with the theme of inclusion at its core to remember his effort. Guys of all nationalities, skin colour, sexuality and whatever else started playing the game they play in heaven.

It’s all very warm and fuzzy really, and a good news story if there ever was one.

In Sydney, a group of mainly gay (some debatable) has-beens, coulda-beens, reformed mungos, lost kiwis and a few Poly lads have been playing under the banner of Woollahra Colleagues in the Subbies comp for almost 10 years now. When the Convicts were established within the Colleagues fraternity, Rich McGrath, the club president, notably said ‘Well everyone thinks we’re poofs anyway so what’s the matter?’ After a clean sweep of grade premierships last year, Colleagues can be just about whatever they bloody well want right now.

The 2012 trip was the Convicts’ fifth tour (the cup is held every 2 years) and they went over as the tournament’s most successful club, having taken the top tier cup and the second tier bowl twice each. After being beaten by New York’s Gotham City Knights in the Bingham 2010 final, it was time to set the rugby universe right once again. This time they were accompanied by the virgin Melbourne boys to increase the southern hemisphere contingent to a massive two clubs.

The pool matches started off well with both teams recording good wins, first grade finishing day one with not a single point scored against them. The Muggleton-esque defence continued to dominate, with the boys blotting out Dublin Warriors and the London Steelers 22-0 and 15-0 on day two. John, do the Rebels know you’re consulting on the side???

Just when four games in two days had battered all and sundry, the Manchester summer turned on a five-degree, windy, raining shitfight of a day — a conspiracy if ever there was one!

But having a hefty pack does help some times and the Convict boys in the big numbers watched the single digits demoralise their opponents. The final was a repeat of the Bingham 2006 decider with our boys up against the San Fran Fog again. And again the right team got up: a scrum pushover try capped off a 22-5 win over their longtime rivals. Second grade fought over the line with an injury list to rival the Waratahs’, and claimed the bowl 13-3  against the odds.

All jokes aside, there’s some great rugby played at the ‘Gay World Cup’ with 40 teams in competition. Spectators in the crowd included some upstarts like Ben Cohen and Gareth Thomas who saw some ‘bloody good football’, according to Cohen. And it’s no slumber party either. Given that amateur teams travel the world for this, it’s all held in a weekend — that’s right, six games in three days! A particular mention needs to go the Convicts’ number 10 James Saunders for racking up seven tries on his way to being named Player of the Tournament.

So congrats to the Convicts and the Chargers for maintaining the southern hemisphere’s dominance even at grassroots. We’ve heard the Bingham cup is odds-on to make it to Sydney in 2014, which would be bloody awesome. You gonna get the boots out again, Scarfman?