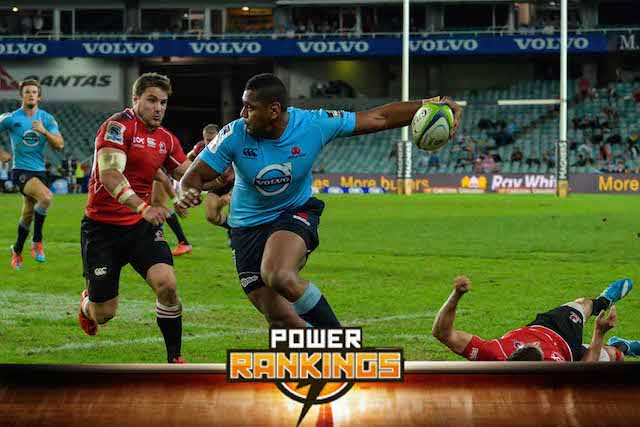 The Super Rugby 2014 Final Power Rankings are here, and the results are not what we expected. The table is included below for you to examine at your leisure, but I’ll only be addressing those teams highlighted in red – the Top 6 of 2014’s competition. 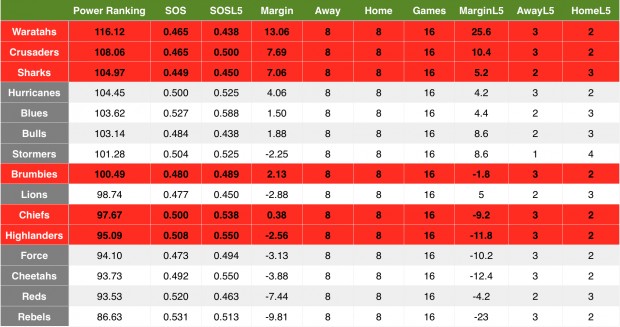 The Waratahs were Power Ranking Leaders for 2014 with 116.12 points. At one points over the last 5 games they rose to 124 points, the highest power ranking I’ve ever seen.

The Tah’s had one of the weakest ‘Strength Of Schedule’ ratings of the competition, because they didn’t get to play directly against the Waratahs – a luxury shared with only the Cheetahs (0.250) and the Crusaders (0.688). Each Super team will take on their own conference twice, and 4/5 teams of the other conferences. Teams with strong schedules will have missed out on playing the weaker teams, with the vice versa applicable. By nature of winning more games, the strong teams will invariably achieve lower strength of schedule ratings, as there are fewer strong teams to compete against.

Their Strength of Schedule during the last 5 matches is the lowest in the competition, courtesy of mopping up the remaining bottom of the Australian Conference away from home (Rebels 0.250 and Reds (0.313) as well as middling New Zealand teams (away for the Chiefs 0.500 and home for the Highlanders 0.500). The Brumbies, at 0.625, were the hardest opponent in the last 5 matches and were beaten comprehensively 32-8 in Sydney. The Waratahs are currently in the midst of a 7 game winning streak after playing 3 away from home.

The Waratahs average scoring margin per game this season currently sits at 13.06 points ahead a game. This nearly doubles the next highest team. As per RugbyReg last night, this is the new record for Super Rugby, surpassing the 2002 Auckland Blues (although only by a single point differential – and divided by 16 competition games).

The Waratah’s are the competitions most statistically powerful team both in Power Rankings and on the final ladder. Based on these numbers the Tah’s should cruise through the finals to their maiden Super Rugby victory. After all, the Tah’s are undefeated at home…

The Strength of the Crusader’s schedule was tied with the Waratah’s for second-easiest statistically, with the Cantabrians avoiding matches against the powerful Waratahs (0.750) and the middle of the pack Bulls (0.438). In the last 5 matches the strength of opposition for Canterbury sits at 0.500, having played 2 matches against the 6th seed finals qualifiers, the Highlanders (0.500) both home and away, as well as the Hurricanes (0.500) away, and the Blues (0.438) and Force (0.563) at home.

Over the season the Crusaders have accrued a +7.69 scoring margin per game average, good for second highest in the competition. In the last 5 matches this stat has doubled, as big wins against the Force and Highlanders have cushioned the impact of narrow wins against the Highlanders and Blues, as well a 7 point loss to the Hurricanes. The Crusaders have scored on average 2.5 tries per game in 2014.

The old adage of the Crusaders playing their best Rugby whenever finals are around the corner is ringing true yet again.

Jake White led the Sharks to win the South African conference in 2014 by implementing a style of Rugby that has become synonymous with the man himself – JakeBall. As the Sharks playing style emphasises winning arm-wrestles through big defence and kicking penalties, it was surprising to see that their Power Ranking through the course of the competition has consistently been high, finally finishing on 104.97.

After the Sharks schedule saw them avoid match-ups against the Force (0.563) and the Chiefs (0.500), the Sharks earned the statistically easiest season in 2014. The Sharks have been good at home, winning 75% of matches in Durban against quality opposition like the Waratahs and the Hurricanes – however in their 2 latest home games against the Stormers (FT: 21-19) and Highlanders (FT: 34-19), the Sharks have dropped the ball. The Strength of Schedule in the last 5 rounds sits at 0.450, having played the Crusaders (0.688), Blues (0.438), Cheetahs (0.250), and the Stormers (0.438) all away from home, with a match at home against the Stormers as well. The Sharks’ final push for the finals was the second easiest run home in all Super Rugby.

The Sharks finished the regular season with a respectable +7.06 points margin on average, good for third on this list. Throughout the 2014 campaign, the Sharks have only been blown out once, against the Highlanders, and have managed to lose by very close margins in other defeats. In the last 5 matches the Sharks winning margin has shrunk to just +5.2, which is not a promising sign with the ease of opposition played. However, if not for their bonus point victory against the Stormers in last weeks fixture,  this side would have averaged winning margin of just +0.4 per game.

With their recent form at home trending down, as well as nearly doubling their defeat total in the last 3 rounds, the Highlanders might have an opportunity to upset the South African Giants early on sunday morning. Can lightning strike twice?

The Brumbies Power Ranking of 100.49 is arguably the most perplexing result the Hollinger formula has produced in 2014’s Super Rugby season. When the Brumbies and the Force squared off last week it become perfectly clear how dynamic this Brumbies side could be – so why isn’t that represented in their Power Ranking?

The Canberra side finished the season with a Strength of Schedule rating of 0.480, a decent enough figure – since the majority of teams play against each other, by season’s end there are only minor variations in the SOS (lowest = Sharks, 0.449 ; highest = Rebels, 0.531), and the Brumbies sit just under the halfway point of that range, having missed out on the Highlanders (0.500) and the Lions (0.438). No reason for a lower than expected Power Ranking there.

The season concluded with the Brumbies earning an average scoring margin per game of only +2.13, but this lowly number decreased in the final 5 matches to -1.8. This is where the blame can be assigned for a lower than expected Power Ranking. Despite scoring nearly 50 points in Round 19 against the Force and putting the Rebels to the sword in Round 16, the Brumbies lost narrowly to the Cheetahs, and received a hammering away from home against both the Bulls and the Waratahs.

Though the Brumbies can claim 4th seed in the finals, they come in at 8th on the Power Rankings Table.

The Chiefs were lucky to crawl in to the playoffs in 2014, with some wet and wild weather in Auckland the only thing saving them from a dangerous Blues attack. As it stands, the Chiefs have secured a Power Ranking of 97.67  for the regular season.

The Chiefs did not play against the Reds (0.313) and the Sharks (0.688) in 2014, and their schedule earned a rating of 0.500, the 7th most difficult in the competition. In the last 5 rounds the Chiefs run to the finals was among the most difficult of all teams, facing off against the most dangerous attacking back lines in Super Rugby – the 0.500 Hurricanes, both home and away, the Waratahs (0.750) at home, the Highlanders (0.500) away, and the Blues (0.438) at Eden Park. These matches saw the Chiefs average scoring margin per game fall to -9.2 points a game; this is the 5th lowest margin over 5 games in Super Rugby.

Overall in the season the Chiefs weren’t quite so bad, as they posted an average margin of +0.38 points per game – an improvement on negative 9 by all standards.

Though the statistics seem terrible in the Chiefs case, they played as well as conditions could allow against the Blues in Auckland with their season on the line, and the two time defending champions boast an array of talented all-blacks in their side. They may not be the best side in the finals, but they are highly capable of spoiling the party for the Brumbies later tonight.

The Highlanders have qualified for the Super Rugby finals, but hold the 5th lowest Power Ranking in the competition with 95.09 – only 2 points better than the hapless Queensland Reds.

The men from Dunedin played Super Rugby’s 4th hardest schedule in 2014, quite an achievement considering the lowest rated teams generally take out the toughest schedules in the Power Rankings. The Highlanders avoided match-ups against fellow Finals qualifiers in the Brumbies (0.625), as well as the 14th placed Cheetahs (0.250). In the last 5 matches the Highlanders played the second most difficult run home in Super Rugby, with both home and away matches against the Crusaders (0.688), the Waratahs in Sydney (0.750), the Chiefs in Dunedin (0.500), as well as the Queensland Reds at Suncorp (0.313), averaging out to a charge home rated 0.550.

The Highlanders endured a season of highs and lows to reach a 0.500 win/loss record, earning a scoring margin  of -2.56 points per game, after failing to convert 6 games by margins of less than 7. By keeping it close, the Highlanders were certainly an entertaining team to watch – but their inability to grind out wins consistently hurts their Power Ranking. In the last 5 games the Highlanders scoring margin fell to -11.8 per game after winning only a single game out of 5. The Highlanders have leaked at least 25 points a game on 10 separate occasions during the season, and have let in 77 points in 2 games to the Waratahs and the Crusaders.

However, the shining moment of the Highlanders season was an upset bonus point victory against the Sharks in Durban in Round 11, as mentioned before. Can the Highlanders turn around a mountain of bad form to overcome one of the competition’s strongest teams?

Preview: SR Qualifier – Brumbies v. Chiefs
Brumbies hold on in the thriller in the chiller