STAT ANALYSIS: There can only be one

STAT ANALYSIS: There can only be one

You gotta love differences in life. Middle of the road – blah. To shake things up you gotta be a little different and if you want a team that’s sticking out like a dog’s dick after just 5 rounds, have a look at the Stormers. 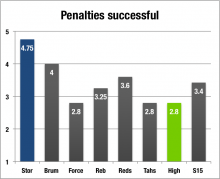 The most obvious thing is that they’re top of the log. Played 4 won 4 with the points from a bye as well. On average they score the 3rd highest points in the comp (26). So far, so good. But, against the will of God (as Sam Ikin would say) they are 10th in the number of tries scored.

Their winning formula is simple but extreme – choke and punish. Not ‘choke’ in the All Blacks sense of the word, but in the strangle the life out of the opposition point of view, because the Stormers not only concede the second lowest number of points per match (18.5), they also convert the highest number of penalties per match. The Stormers are giving away just over a try per match, but racking up almost 5 successful penalties. 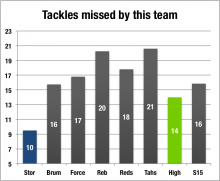 Defence is their stranglehold – they miss the fewest number of tackles in the whole comp per match (10) and have the second fewest number of line breaks made against them (1 per game, the Force are worst with 4). Interestingly, but not unsurprisingly, they make the fewest steals at the breakdown (2 per game) out of the whole comp – no doubt because they’ve strung out across the field rather than clogging the tackle contest. What this also means though is that give away the fewest number of penalties at the breakdown as well (roughly half of those given away by the Tahs or Highlanders).

The Stormers do give away the highest number of offside penalties though – no doubt as part of their defensive strategy. 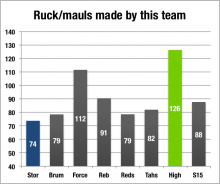 Despite this they concede the third fewest number of penalties overall (9 per game). The lack of ruck penalties, and the fact they give away the fewest number of infringements at scrum time obviously balance out these offsides.

But before the running rugby fans despair, there is another team doing well, with 4 wins in 5 rounds so far, and that’s the Highlanders. It’s almost like they’re some sort of nemesis to the Stormers in the movie named after them. Where the Stormers are 3rd last in the number of ruck/mauls completed, the Highlanders are at the top, with not far off the double that of the Cape’s best. 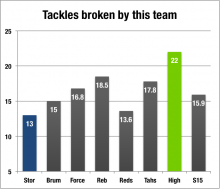 Which strategy will ultimately succeed?

THERE CAN ONLY BE ONE