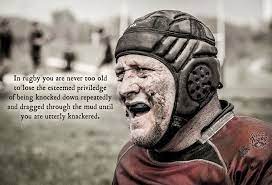 Today’s news is brought to you from the great Soap Dodger, Keith. Being both old and a Pom he has no idea of technology and so I’m posting this on his behalf. Note at the end is a list of G&GR rugby players. If you’d like to be included send your particulars to Keith in the comments section.

The Good? The Bad? and The Farkin’ Awful?

Desperate times call for desperate measures and I can’t think of anything more desperate than, in the absence of our famed weekly correspondents, calling on a Soap Dodger to fill a hole. Once more to the breach dear friends. Cometh the hour, cometh the Pom.

So, what the bloody hell do I write about? All the interesting stuff that’s happened over the last couple of weeks has been done to death and surprise, surprise the G&G got steamrolled in Auckland and the Nearlies have come out top of the RC pile. Pile of what is down to your own personal opinion but for me it was close but it wasn’t that great.

Having made that change of tack I came up with the title for this piece. My take on what has happened over the last 12 months or so. Easy to understand headings and operating under the KISS principle.

Put simply, who have been your best international and super rugby teams over the last year? Being a Soap Dodger and a lost cause Rebels supporter I’ve had to put away my bias so it’s been a difficult choice to make.

On the international front it has to be a straight fight between the French and the Irish. The French took the 6N with a Grand Slam performance that put them up there as front runners for the RWC but they were pushed all the way by the Irish. This year’s July internationals and the Rugby Championship had decided it. France went to Japan, Wales to the DDFs, the SDs to God’s Own, the Jocks to the FISMs and the Irish to the Nearlies. The Taffs did well, the Jocks meh, the French indifferent and the Soap Dodgers continued their good away record against the G&G. It was great to catch up with the Usual Suspects in Brissie plus a few new faces.

There was clearly only one winner out of these match ups that tipped it for me: the Irish are my international team of the year. They have outstanding players up front and in the backs and have an all court game. In Sexton they have a cool head on old shoulders to drive them round the park so wrap him in cotton wool. They also have an organisation in the IRFU that is second to none in managing their players workload and a coaching set up the is fully functional, unlike some countries we could could mention.

I have only one big question and that is how they will react to the big occasion of RWC 2023? I’ve seen great Irish sides in the past that when it came to the Big One, they’ve choked. In the 6Ns in 2023 they will have to lay down a marker that says “we are ready for the big one”. It’s easy for me to say that I want the SDs to win the trophy and as an Aussie citizen I want the G&G to do well. If the men in Green make it to the final and my other teams don’t I’ll be sinking a few pints of the black stuff to their success – never a problem.

Next up, who’s your best SR team? It would be easy to pick the Crusaders after all they’ve won the comp for the umpteenth time and their clinical performance in dismantling the Blues was something to behold. However, they aren’t my choice.

The Blues had a great season and are coming back after many years in the doldrums. The other NZ teams were pretty much of a muchness and lost more games to their Aussie counterparts than in past seasons.

The Drua and Moana Pacifica were hit by Covid and the MP got the shit end of the stick being forced to play many games with a vary short recovery compared to the other sides. They were however a breath of fresh air in the comp and will only get better.

Turning to the Aussie sides, much was expected of the Reds but they flattered to deceive. Rumblings of unrest between the squad and management didn’t help their cause. It was left to the Brumbies to fly the Aussie flag in the finals again and they did us proud nearly turning over the Blues in the semis but it wasn’t to be. They’ll be there or thereabouts in the 2023 comp.

The Force are a work in progress moving in the right direction with a new coach and a strong squad for 2023. The Rebels suffered from a massive injury list but can’t hide behind that. They underperformed. The coaching team didn’t seem to have any direction and it showed. A new coach and some decent close season signings might set them on an upward path. Time will tell.

Finally to the blue-arsed boys from NSW – blame the Mayoress for that one, Hoss, I’m innocent. The disaster of 2021 left many chuckling, how the mighty had fallen. How would they do in 2022? Not bad as it happened. They dug in and won some big games they were expected to lose. I was cheering them all the way when they stuffed the Crusaders. Getting into the quarter finals was a massive effort but they ran into a strong Chiefs side and couldn’t advance further. For turning their fortunes around in the way they have means they get my Super Rugby team of the season. This will no doubt cheer up Hoss and I expect suitable alcoholic recompense for writing nice things about them.

How do you define bad? Each to his own I suppose. I’ve seen a lot this year that has pissed me off no end or areas where I feel changes must made. So in no particular order:

Not being able to ruck

The Mayoress was perusing the internet the other day and came across an article advertising a Golden Oldies Tournament in Perth next year inviting teams to participate. Looks like it’ll be great fun but the $400 beer tab for early entry would last one round. She suggested that we should enter a team made of of G&GR contributors. I know that it’s unlikely that we could put an actual playing squad together but it got me thinking. Many of us have been dipping in and out of the site for years and some have even taken the next step and met for a few beers and a chat at Super Rugby and internationals, moments that I for one will never forget. Apart from those few doughty citizens, we know very little about each each other. I then made a quantum jump to end of season rugby tours that I participated in the memories of which are lost in an alcoholic haze and the unwritten rule of “ what goes on on tour, stays on tour”. No tour was without its tour programme, a compendium of useless information on said participants. With this in mind I’ve put together my own pen portraits of fellow Gaggerlanders I’ve met and whose company and free drinks I have enjoyed. It would be great to get a full squad of 23 and add more names to the programme. To get the ball rolling The Usual Suspects are listed below.

No need to give any personal information like real names just a few gory details like playing position and any humorous anecdotes you want to add. If you think you fit add your name and profile in the comments.

Team Masseuse and Sports Psychologist, The Mayoress – accepted the job under sufferance stating “it would be great if you were all young, fit and ripped”; however, is prepared to accept large quantities of gin in recompense.