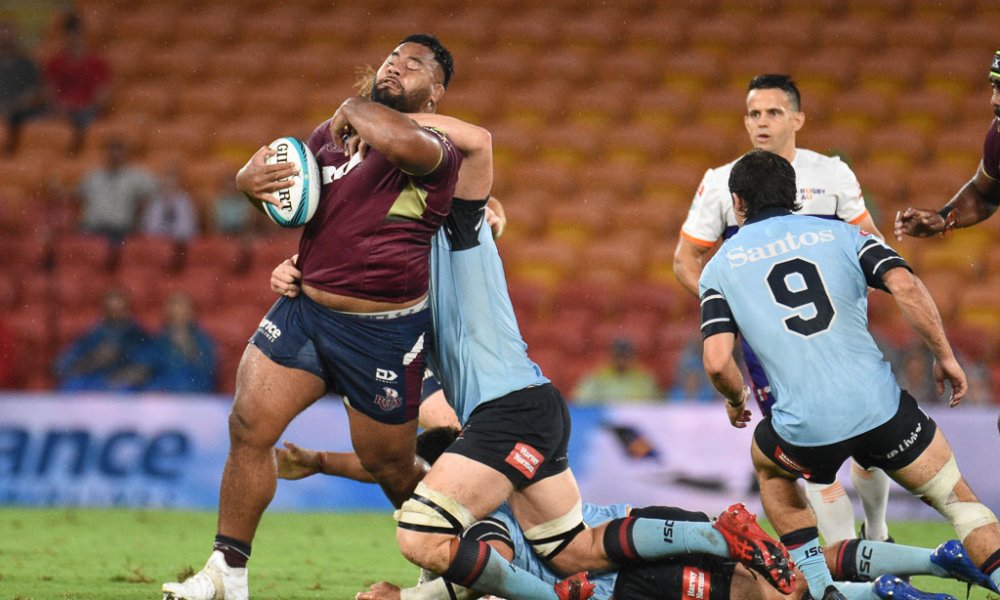 Raynal ‘I take total responsibility for what I did’

Rugbypass reports that referee Mathieu Raynal has addressed his controversial decision to penalise Bernard Foley in the first Bledisloe Cup Test against the All Blacks, saying “I try to do what is the most fair.”

After being crowned French rugby’s referee of the season yesterday, Raynal discussed the entire affair.

“I take total responsibility for what I did, 100%,” the 41-year-old said. “I had a necessary reason for making the decision even if it was a strong one, which caused people to talk. I try to do what is the most fair. That’s at the heart of my job. Sometimes it creates tensions, frustrations, arguments but I take responsibility over what I do.”

Wallabies fly-half Foley said after the match that “there was a bit of confusion” due to the volume of the crowd, and that “he’d told me to hurry up, but time was off so he didn’t really mention that there was going to be further action than starting the clock.”

Raynal also responded to those claims by the Australian, saying: “I told a player five times to kick the ball to touch. I couldn’t do otherwise. It’s not me who decided to make the decision, it was the player who forced me to make it.”

The Frenchman also explained how he had discussed the decision with Wallabies head coach Dave Rennie after the match, “I had a discussion with him which was very sincere and honest,” Raynal said. “He was satisfied by the refereeing during the entirety of the match. Obviously, we didn’t agree on the final decision. I can guarantee we had a calm conversation.”

Guess who’s back? Back again. Hooper’s back. Tell a friend.

So Dave Rennie won’t let me be, or let me be me, so let me see.
They try to shut me down on Test Rugby. But it feels so empty, without me.

The SMH reports that Michael Hooper is set to return to training with Wallabies teammates next week before a potential return on Australia’s five-Test tour of Europe in October and November.

The 121-Test breakaway missed the Rugby Championship after withdrawing from the Wallabies team to play Argentina in Mendoza in early August. Explaining he wasn’t in the “right mindset” to lead the Wallabies, Hooper flew home and has been on leave since. The 30-year-old has remained in frequent dialogue with Wallabies coach Dave Rennie and general manager Chris Webb, and wants to get back on the training field with a view to a return for the spring tour.

The squad for the tour will be named in mid-October. The Wallabies play Scotland on October 30, and then France, Italy, Ireland and Wales. Like so much soap, England dodge the Wallabies this time.

Hooper has been training on his own but the next planned step will be joining other Sydney-based Wallabies at one of the pre-tour training hubs being run across the states. Discussions about whether Hooper goes on tour will continue after his return to squad training.

The Wallabies have been well-served at No.7 in the Rugby Championship, with Fraser McReight and Pete Samu playing well in Hooper’s absence. Samu, in particular, has enjoyed a breakout season.

Nine has reported Tim Horan’s recommendation that Hooper returns from the bench. “The game has changed in the last 18 months,” Horan explained. “It’s a collision sport now. And you need bigger bodies at the start. What Hoops can do in the last 30, 35 minutes is probably more than he can do in the first 35 minutes and that might help him mentally and also prepare him for test matches going forward.”

The panel have been appointed to review the performances of match officials in the competition, while they also have the responsibility of selecting an elite group of referees.

“We changed the structure a bit on how we review our match officials’ performances,” Henning told reporters. “In the past, it was done by the five high-performance referees from each union. But now we have a switch for four independent assessors as a selection panel. They are going to do those reviews with me as the chairman of the group. By doing this, we have aligned ourselves to the model World Rugby is using to assess international performances. The idea is to bring a fresh pair of eyes and fresh thinking into the mould. All four of them are recently retired international referees. The aim of that then is to get to an elite group of referees selected on merit and not necessarily on representation from each Union, to bring credibility to the match officials we appoint. That’s the long-term goal.”

Henning revealed that former Scotland hooker Steven Scott has been added as a set-piece analyst. Scott will have the responsibility of reviewing the scrums and lineouts, which Henning pinpointed as two of the major officiating problem areas.

“He will show the referee what are the important parts of the scrum, lineout and maul they should focus on, what they missed, what they didn’t miss and what they did well. Most of our referees never played in the forwards, to be honest. Scott has 17 years of experience coaching forwards. Having him on board will help referees to understand the set-piece process a bit better and then hopefully that will lead to better decision-making and more accuracy in reading situations.”

Henning also conceded that referees and TMOs will be appointed in pairs, in an effort to create synergy between the two individuals and limit the referral stoppages. “Our aim is to appoint those [referee and TMO] in pairings. The more they work together the more effective they become and the better understanding there is between them.” Henning said. “It will then take less time to reach the right decision when it goes to the TMO. It also means the TMO can make calls without stopping the game and calling for an official referral. He can give information to the referee that the referee trusts for something that’s only a penalty and doesn’t need to be referred.”

Taniela Tupou to re-sign with RA, we’ll see with Reds

Christy Doran at Fox reports that Taniela Tupou is expected to sign a four year extension with Rugby Australia – but, crucially, he won’t announce which Super Rugby club he’ll play for until he knows who’ll coach Queensland beyond 2023.

The future of Tupou is the biggest piece of the puzzle in Australian rugby at present – and dual international and Queensland Reds coach Brad Thorn is central to the debate raging across the land about the tighthead prop. They aren’t quite Justin Langer areas, but Thorn’s role at the Reds has become increasingly vexed in Australian rugby, foxsports.com.au understands.

Those in his inner sanctum, including some players, but especially General Manager Sam Cordingley, believe Thorn hasn’t been given the credit he deserves for turning around Queensland’s fortunes over the past five years after the Reds fell off a cliff following Ewen McKenzie’s departure in 2013. Others, however, believe Thorn has become part of the problem at the Reds with a number of players stalling in their development [see linked article for stated examples] with his technical nous questioned.

The Reds are eager to re-sign Tupou, rightly believing he can be the poster boy of the franchise for years to come. They see him as someone they have invested in ever since general manager Sam Cordingley helped lure Tupou to the Reds from Auckland and helped him on his path to the Wallabies.

But whether or not he stays with the Reds beyond next year’s World Cup remains an intriguing situation and could well rest on whether Thorn’s contract is extended.

For now, Rugby Australia, as part of their move towards a new contracting model where the governing body will sign its top tier players, has taken over Tupou’s negotiations. He’s likely to sign a new four-year deal on a deal worth an estimated $1 million per season, which includes the option of a sabbatical, taking him through to the 2027 World Cup, but, as part of the new contracting model won’t have to decide which Super Rugby franchise he joins until a later point – likely once Thorn’s future is sorted at the Reds.

To address some of the discontent at the Reds, as well as ease some of the load on Thorn, highly respected Queensland University coach Mick Heenan has been brought on in a new position.