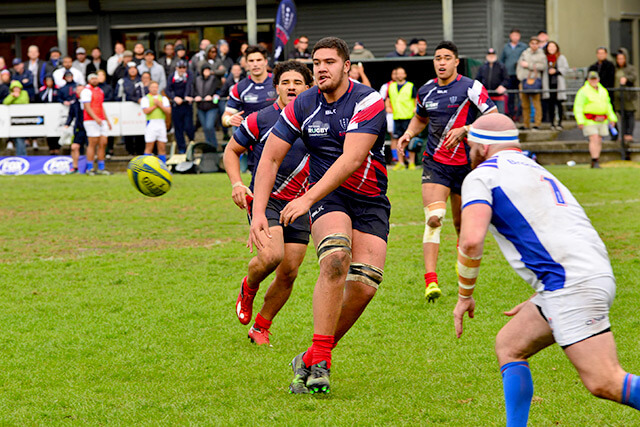 The Melbourne Rising held off a fast-finishing Greater Sydney Rams 41-31 at Harlequin Park.

Melbourne dished up some typical weather with windy conditions, some rain and even some blue skies. This was a match of two halves; the Rising getting out to an early lead, the Rams hitting back in the second half. The Rising were able to withstand the Rams charge to register their first win of the season.

A late change to the Rising team; Nic Stirzaker was out injured, replaced by Australian u20’s Scrumhalf Scrumhalf Harrison Goddard.

The Rising had a couple of early attacking lineouts which resulted in nothing after some handling errors. The Greater Sydney Rams were ill-disciplined and gave away a number of penalties. After just 8 minutes, referee Graham Cooper warned Rams’ captain Jed Holloway that his team needed to fix their discipline. Just a minute later Albert Tuisue was given a yellow card. Following

Following Tuisue’s sin-binning, the Rising received two scrum penalties, keeping the pressure on the Rams pack close to their line.  After a successful feed, Harrison Goddard passed the ball to Jack McGregor, who provided a wonderful inside ball to Victorian junior Sione Tuipulotu to score the first try of the match. 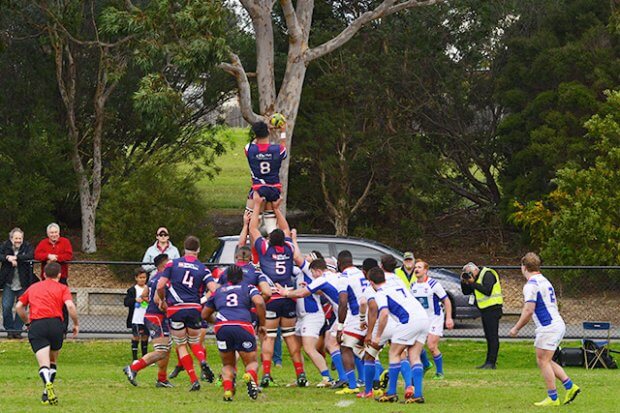 The Greater Sydney Rams regained the kickoff and were inside the Rising half for the first time in the match after 14 minutes. Rams prop Jed Gillespie knocked on a short time later to turn position back over to the Rising.

Harrison Goddard was the next over the try line after so wonderful pressure from flanker Ikapote Tupai, who charged down a kick from Rams scrum half Dion Spice inside the Rams’ 22. Goddard was able to pounce on the ball to extend the Rising’s lead to 12-0.

Sione Tuipulotu made a nice linebreak, but at the breakdown, Kitione Ratu came in from the side and was penalised. In the 21st minute, this was the first penalty the Rams had received compared to nine that they had conceded. Captain Jed Holloway tried to inspire the Rams with a great run through the Rising defence, but Tupai was not only able to bring him down from behind but also won a penalty.

Jack McGregor dummied and stepped through the line in his own half, passed to Semisi Tupou, who found Jack Maddocks and then Kitione Ratu who made a great run. The whole move gained 50 metres for the Rising. After some work from the Rising forwards, the Rams were penalised again and Holloway received another team warning. 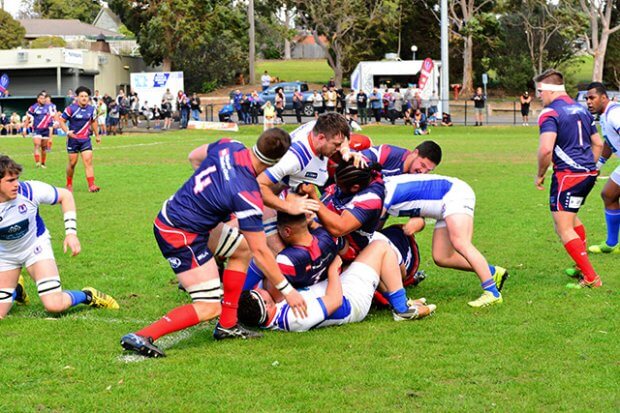 30 minutes into the game Harrison Goddard was involved again providing a sublime inside flick pass to Semisi Tupou to send him through the line. Tupou made an angled run to score in the corner. McGregor converted from the sideline to give the Rising a 19-0 lead.

Goddard then put up a box kick that bounced at an angle as if Kitione Ratu had the ball on a string. The Fijian flyer took the bouncing ball and ran 50 metres to extend the Rising’s lead to 26-0 at halftime. The penalty count at halftime was a lopsided 12 to 2 in favour of the Rising.

Rams’ scrum half Dion Spice went off injured with a pectoral injury.

At halftime, it was as if the two teams had changed jumpers.  Rising lock Emmanuel Latu-Meafou dropped the restart. A short time later Taqele Naiyaravoro made a damaging run before he was stripped of the ball in the shadows of the post but in the act of stripping the ball the Rising knocked on. From the scrum, Naiyaravoro made another run to get stopped just short of the line. Quick thinking hooker Hugh Roach picked up the ball and placed it next to the upright pads to get the Rams on the board three minutes after the break.

Seven minutes later the Rising made a mistake at the breakdown in midfield Rams flanker Kotoni Ale picked up the ball and was able to run the 55 metres to score for the Rams despite some close attention from Jack Maddocks.

Hugh Roach then intercepted a Jack McGregor pass but was run down from behind by the returning Sefanaia Naivalu and the Rising were able to clean up. A short time later Roach made another good run, which resulted in replacement scrum half Waldo Wessels diving over under the posts to get the score back to 26 to 19 in just the 54th minute. In an attempt to stop the Wessels try Rising hooker Siliva Siliva clashed heads with Steve Cummins. Siliva was knocked out and there was a 5 or 6 minute delay. The stoppage seemed to halt the Rams’ momentum.

In the 62nd minute, the Rising were awarded a penalty and Steve Cummins decided to calm things down and to extend the Rising lead to 10 points. Jack McGregor made no mistake kicking the first penalty goal in Melbourne Rising history (it only took four seasons).

McGregor then put up a bomb that Naiyaravoro collected and ran for 40 metres before being stopped by McGregor. Following this run the Rams had a period of sustained pressure on the Rising, which included some sloppy play but ended up with Cam Bailey passing to Naiyaravoro who scored in the corner, reducing the Rising’s lead to 29-24.

From a lineout, Sefanaia Naivalu turned on the speed to burst through the line passing to Jack Maddocks, who provided the ball to a sprinting Kitione Ratu, who ran around under the posts to score his second try. A short time later Goddard kicked into space, and Semisi Tupou came flying through to gather the ball and to match his fellow winger Ratu with a double.

Sefanaia Naivalu’s run to set up fellow Fijian Kitione Ratu’s second try which extended the Rising’s lead to 12 points. Naivalu in his return from injury didn’t have a big impact on the game, but he did it when it mattered.

Given the match was a game of two halves it was quite difficult to pick a man of the match because there were a number of players from either side who played well in one half or the other depending on which team they played for. I am going to choose Harrison Goddard who scored one try and was involved in at least two others. His performance showed that Nic Stirzaker will have a fight on his hands to maintain a bench spot for the Rebels in 2018.

Sione Tuipulotu continued his good form for the Rising while Taqele Naiyaravoro was at his dangerous best for the Rams. Semisi Tupou and Kitione Ratu, who scored doubles and Jack McGregor also had good games for the Rising. While Hugh Roach and Jed Holloway were important for the Rams in their second half comeback.