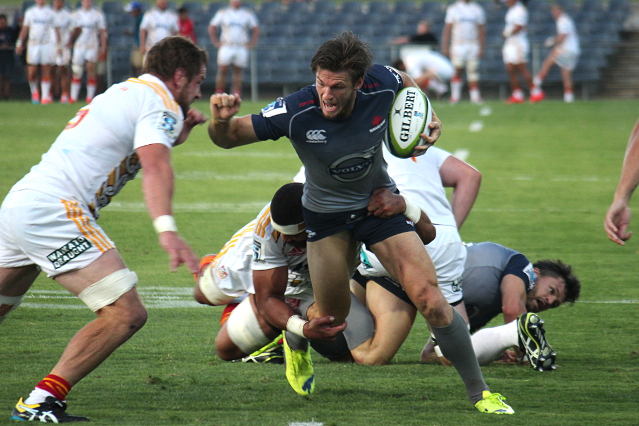 The Waratahs beat the Chiefs 38-36 at Campbelltown Sports Stadium last night but it would have been the visitors who felt happier about the trial because they performed well with an inexperienced team.

The Waratahs scored six tries to four but brothers Marty and Damian McKenzie kicked four penalty goals between them for the Tribe to get close. Had Damian kicked the last one from 45 metres and in front near full-time, they would have won the trial.

Serves them right for not backing themselves going for tries earlier in the game. 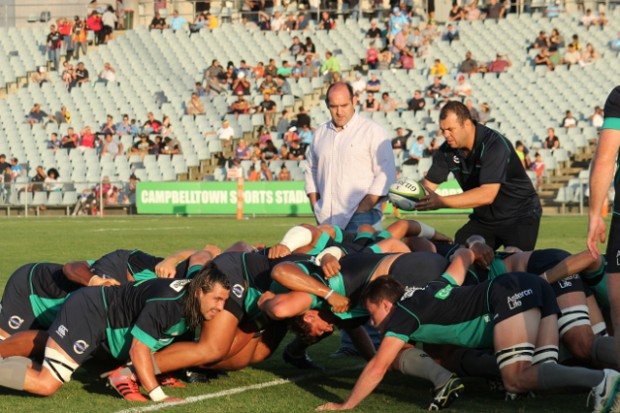 The Waratahs started quickly with Taqele Naiyaravoro scoring at three minutes but on the restart the Tahs received the ball poorly and they were eventually punished…by a penalty goal?

The Chiefs went for goal again after Rob Horne scored the first of his hat-trick of ties. Were these the Chiefs? It was like David Warner dinking the ball around for singles. 14-6 Waratahs.

But then the real Tribe showed up and Hosea Gear scored in the corner following good work from first-five Marty McKenzie.

After Dave Dennis came on early for the Waratahs to replace Mitch Chapman, who broke his nose, the visitors slotted their third penalty goal.

Then came the move of the game as the Chiefs laid on one of their trademark tries so unloved by the South Africans. Near their own 22 they chucked the ball around with the scrambling tacklers always a half-second too late, and winger Bryce Heem scored in the corner.  Lovely stuff that.

Yeah—these were the Chiefs alright: they were ahead 21-14 and had scored 18 points on the bounce. 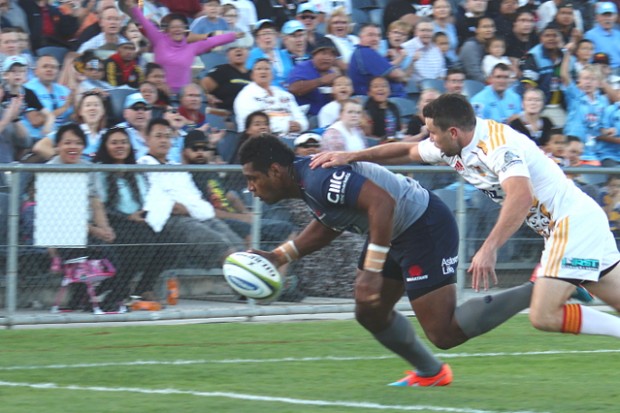 After Israel Folau got a five-pointer, the conversion tied the scores at 21-21, but the Tribe took their turn as they charged down a Bernard Foley clearing kick and raging lock Michael Fitzgerald was in.

Then came a whole five minutes with no scoring before Horne nabbed his second. This was followed by one from the barnstorming Jacques Potgieter, who had arrived back from Japan during the week and probably didn’t know where Campbelltown was at the time.

What a half of rugby! It wouldn’t have pleased the purists but with these two teams playing in a trial, the attack was always going to be better than the defence. 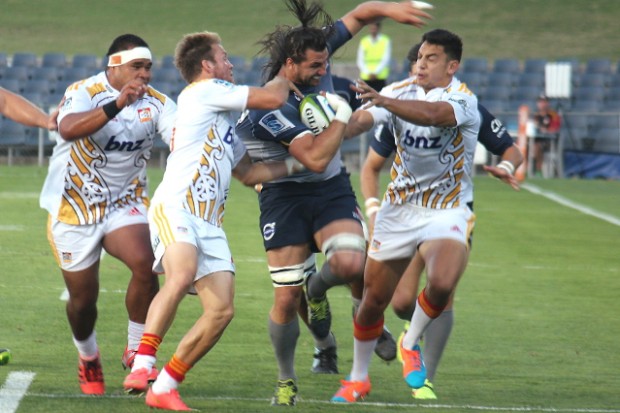 Jacques Potgieter – knew where try-line was but not Campbelltown

The benches were emptied during the half; the attack wasn’t so stellar and the defences kicked in.

The highlight after the break for Chiefs’ fans was when Sonny Bill Williams ran on after oranges. The photographers were trying to get him and his old rugby league protagonist, Folau, in the same shot, but SBW was a bit off the pace and Folau was no fat has-been like his last opponent.

Just as the big bloke in the Chiefs’ jersey behind me yelled: “I love you Sonny Bill,” Williams dropped the ball.

As if in counterpoint to the first half the scoring was sedate after the break: 8-5 to the Chiefs.

It was exciting early in the half though because Waratahs’ scrummie Nick Phipps had to make a miracle effort to stop a try; then Will Skelton got a yellow card after a complete misunderstanding. He didn’t understand that referee Angus Gardner would bin him for stopping a quick tap move without retiring ten metres first.

Damian McKenzie, the younger brother, kicked the penalty goal and the scoreboard operator had a 20 minutes rest.

A few maul drives from lineouts didn’t work for the Waratahs but Horne went over for his hat-trick try following a scrum, when the ball was slipped to him after Foley stumbled. Waratahs 38 – Chiefs 31 with 16 minutes remaining.

The Waratahs had enough possession in the second half, but their attack wasn’t so sharp and when they turned the ball over opensider Tevita Koloamatangi scored. The conversion to tie missed; so the Waratahs still led: 38-36. 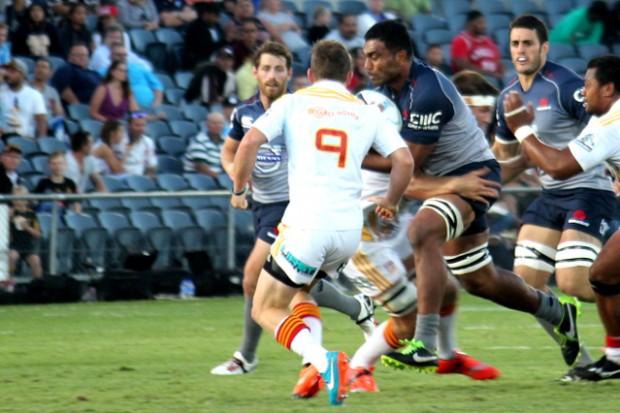 The fringe Chiefs players did better than expected without the services of All Blacks Cruden, Kerr-Barlow, Messam, Cane, and 2014 International Player of the Year Brodie Retallick. Nor were Tameifuna, Ngatai or Nanai-Williams present.

The visitors were a step ahead of getting off their line to defend and to get to the rucks.

Fitzgerald was impressive for the Chiefs and it was good to see one of their warriors Hika Elliot return after his neck problems, and playing well.

The Waratahs might have had a lot of Wallabies on the field but most of them had not played a trial game yet, and had been trained lightly—and it showed.

Potgieter and Skelton showed a bit of physical dominance and Beale was sharp, but the man of the match has to go to Horne who showed signs of becoming a fine finisher. 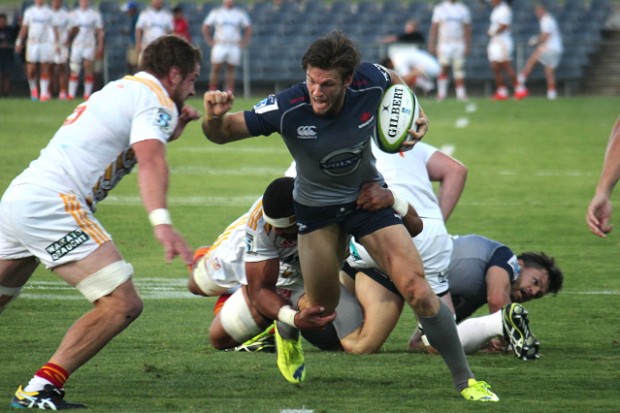 Rob Horne – three tries and Man of the Match

Waratah coach, Michael Cheika, was satisfied with the scrums and that the Waratahs were able to shut down the Chiefs attacking the inside corridor after some problems there earlier.

His biggest area of concern was up front.

“We’ve got to bring the physicality up: that will be the big thing we will be focusing on, particularly in defence.

[At the same time] we’re going have to be extremely aggressive with our attacking ruck and our ball carry to ensure that we’re going to have the flow in the game that we want.”

Cheika was happy with a couple of his big men,

“Willie getting through a good 70 minutes was good; we’ve said he’s going to get more time this year.  I was really impressed with Sam Lousi who didn’t really play rugby before last week [… he] didn’t look out of place at all when he was on the field.”

When asked about playing Folau at outside centre he said he wasn’t too keen on it this year though he may give him a run there at some stage.  There had been so little time for the NSW Wallabies to train that it wasn’t wise to change things early. 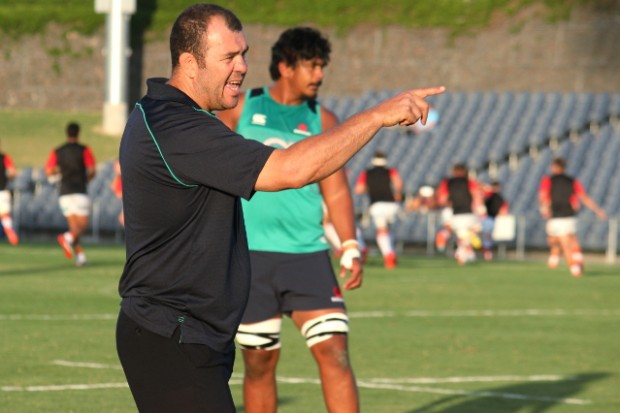 Cheika – the Waratahs have to increase their physicality

Reds down Crusaders in trial match
Six Nations – Round 1