Reds down Crusaders in trial match 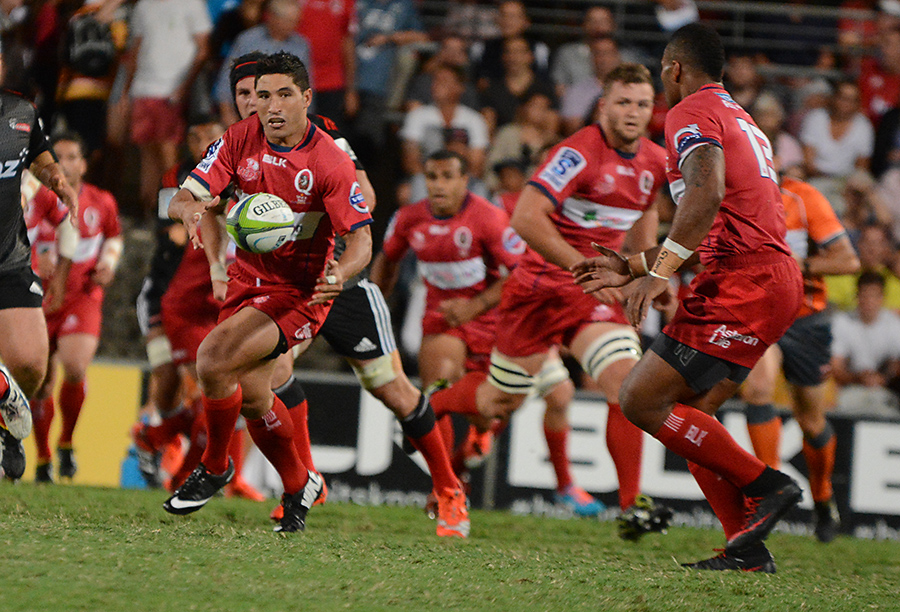 Reds down Crusaders in trial match

Both the  Reds and the Crusaders went down in their trial matches last week (the Reds to the Rebels and the Crusaders were bested by the Hurricanes) and both coaches had clearly named sides this week to test out combinations before Super Rugby starts in earnest next week.

The most talked about head-to-head for the match was of course Karmichael Hunt,  in only his second start for the Reds and his first at fly-half, against Dan Carter with more than 100 Super Rugby caps under his belt.  The Reds need to find a replacement for Quade Cooper for the next three months and the healthy crowd at Ballymore were certainly willing Hunt to step into the void.

The Crusaders are missing 5 or 6 All Blacks players not available for selection until Round 5 and the Reds are starting their season with a string of injuries to key players, so neither side were fielding a dominant or experienced starting line up.

It generally takes a while for combinations to bed down and passes and players can be a bit wobbly in trial matches, but from the kick-off the Crusaders had the Reds under pressure inside their 22.  With Greg Holmes injured Sam Talakai once again started at tight head and he continued to demonstrate the form we saw in the NRC last year.  The Reds scrum remained strong throughout most of the match, satisfying those among us who love a dominant forward pack!

Will Genia’s decision to take the quick tap and chip down the sideline allowed JJ Taulagi to follow it through and scoot through to score under the posts.  Hunt’s conversion was solid to bring the score to 7-0.  It appears that the kicking lessons from QC have paid offer!  The Reds need those quick decisions from Genia this year if they are to build a solid season.  That said, Frisby had a great NRC and could be a solid challenger for scrumhalf at the Reds this year.

Hunt snagged an intercept off a sloppy Crusaders pass that allowed the Reds to move the game to the Crusaders tryline.  A clean take from our lineout enabled the Reds to set up a maul 10m out. The pick and drive action led to James Horwill scoring the first of his two tries tonight.  Hunt’s conversion was again clean (with a reasonable amount of height to it!)

Genia continued to demonstrate his better form tonight with some clever footwork and well timed passes.  But he had a shocking number of kicks in play – perhaps exacerbated by Hunt’s measured kicks.  Bought back hideous memories of the Reds v Sharks semi-final from a couple of years ago.  Not that bad, but Frisby has the edge for kicks in play.

The Reds managed to turn around a dodgy decision from the AR and a great pass from Hunt to Anthony Fainga’a put him into space and that much closer to the tryline.  The pick and drive that followed led to Horwill’s second try for the night with Hunt slotting the conversion.  The Reds were up 21-0.   The Crusaders defence was sloppy for much of the first half- slow to react and not really coherent.

Two tries to Horwill and a penalty try in the first half (again converted by Hunt) showed that the forwards for the Reds really stepped up tonight – solid lineouts, very s0lid scrums, effective turnovers, lovely mauls.  The Reds went to the break up 28-0, effectively ensuring that the Crusaders would arrive for the second half in beast mode looking to claw back the deficit.

The Reds subbed more players in the second half bringing on both experienced Reds players like Beau Robinson but also continuing to blood new players like Campbell Magnay in his second Reds match, backing up from a great showing for Queensland Country in the NRC.    Our defence fell down a little in the second half, allowing the Crusaders to capitalise on the sloppiness and get back into the game with a try in the 46th minute to Luke Romano, converted by Dan Carter.

The Reds were once again caught scrambling in defence as the Crusaders built the weight of possession, and our scramble wasn’t enough as Matt Todd crossed for the Crusaders’ second try of the night.

In the last 20 minutes both coaches threw most of their bench players onto the field to rest key players and to give new combinations a chance to shakedown.  Sef Fagaase left the field injured with a possible busted collarbone, which will be a disappointing start to his life at the Reds.

The final try of the match was a great set up – the Reds jagged a Crusaders lineout through Beau Robinson and a beautiful kick and chase from Frisby put the pressure back on the Crusaders line.  A Reds loose pass was gathered by Samu Kerevi and he powered through to score under the posts.  Frisby converted and the score at full time was a convincing 35-12 to the Reds.

Hunt’s kicking game throughout the match was strong, but he lagged slightly behind in his passing and positional play – a little bit like pausing half a beat to confirm it is the right move.  Hopefully his confidence builds as the season gets underway and that lag disappears.    James O’Connor hasn’t played yet this pre-season, and bar passing on his tonsilitis to Hunt (which also struck down James Hanson who had been named on the bench), I would imagine that Richard Graham will start Hunt in the opening match against the Brumbies next week in Canberra.  Hunt will be far more successful at rugby than he was at AFL, and he knows it.

Genia and Frisby have an interesting season ahead to see who will start.  And the partnership of Kerevi and Chris Kuridrani looks to continue its fine form from the NRC.  JJ Taulagi’s confidence needs to stay this high and as long as he doesn’t leak defensively he will have a stronger season at the Reds than last year.

The Crusaders didn’t have a total shocker, but the final score line certainly did shock a few of us!  Players like Slade and Carter will of course hit their stride quite quickly, and the Crusaders will build throughout the Super Rugby season as they always do for the tilt at the finals.  Matt Todd had a good return from his ankle injury and out of a trial match, there are no red flags for them in the NZ conference (although the ‘Canes have the edge on them).

The penalty try.  A dominant forward display all night rounded out here.

The obvious choice is Hunt and I don’t disagree but I think Talaki came close.

Kerevi, Taulagi and Kuridrani to step up to Super level convincingly