Friday’s rugby news has Hunt moving to 10, Dennis returning from another knee injury, the Rebels in a tight win and some new faces in the Scottish line-up. 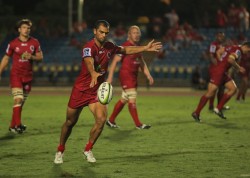 Karmichael Hunt will start at five-eighth for the Reds’ final pre-season trial against the Crusaders, replacing the injured Quade Cooper (collar bone). While coach Richard Graham conceded that he would have preferred to keep Hunt at full-back he was confident in the Reds vice-captain, moving him ahead of rookie Duncan Paia’aua at the position with James O’Connor also out with tonsillitis.

Meanwhile,  former Wallabies coach Eddie Jones has expressed his surprise with the move. While emphasising Hunt’s potential, Jones said, “To put him in at stand-off I think is just crazy. He is a running player, not a distributing player.”

Dennis back from knee trouble 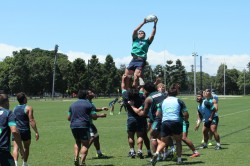 Dave Dennis will make his return to the team in this weekend’s final trial game against the Chiefs. The influential back-row has overcome his third serious knee injury, with the last one keeping him out of the Waratahs final surge towards the Super Rugby title.

“There’s a bit of a mental barrier to be honest,” Dannis said. “It’s my third time around and there are some challenges there.” The team is taking a conservative approach to the recovery period, having Dennis only play the second half of the trial with a switch to lock. “I’ve never really dabbled in that psychology side of things, you’ve just got to man up I think, get over it,” he added. 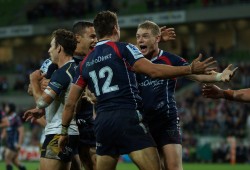 The Melbourne Rebels have pulled off a last second win against the Highlanders last night, with a Dom Shipperly try putting the Australian team ahead 25-24 just moments before the final whistle.

The Rebels came back from a 24-13 deficit with coach Tony McGahan praising the team’s toughness. “To come back from 11 points down with a block of time on the clock really shows some great spirit within in the group and our ability to manage our way through was pleasing,” he said.

Scotland head coach Vern Cotter has named his team to play in their Six Nations opener against France at the Stade de France in Paris. The starting side will feature Glasgow Warriors duo Finn Russell and Mark Bennett and London Irish back-row Blair Cowan, all of who will make their Six Nations debuts on Saturday.

Cotter was weary of the French side trying to improve on past Six Nations results, saying, “They will be very difficult to contain so we’ll have to stay tight as a unit, work hard for each other and try to apply some pressure.”