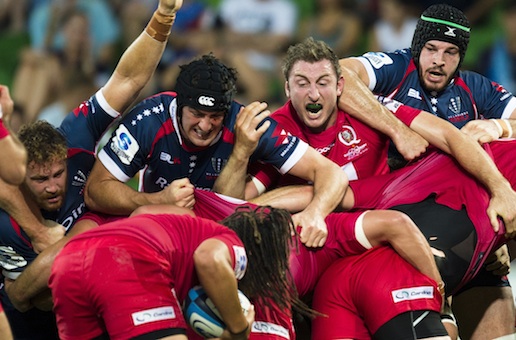 A Rebels outfit missing Kurtley Beale faced a Reds team on a 2 game winning streak. Could the Rebels recover from the loss of one of their playmakers or will Queensland extend their 4-0 winning streak? The only thing certain was that the next 80 minutes would give us the answer.

The first ten minutes looked like most Australian derbies with the sides probing to see any weakness in the opposition. The scores were even with a penalty each.

The Reds dominated possession for the first 30 minutes of the game and converted it into points with a nice maul off a lineout deep in the Rebels 22. The forwards carted the ball to within a metre of the line and then swung it 2 passes for Tapuai to barge over in the 14 minute.

The Rebels held on grimly for most of the first half and finally got a little possession around the 35 minute mark. They worked the ball up field and found themselves with good ball in the Reds 22. A beautiful short ball from James O’Connor put Lachlan Mitchell through the  smallest of holes to score after the hooter. The Rebels took a well earned lead into half time. They lead 13-10 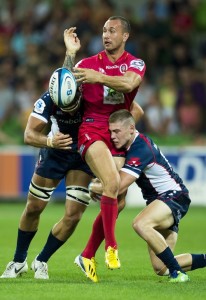 The second half started with a bang. Cooper freed up Ioane on the left wing. He charged down field attracting 3 defenders but was still able to slip a pass to Anthony Faingaa. He in turn passed to Frisby who charged to the line half a field away from where it all started. Cooper converts and the Reds take the lead again. Both teams had chances to score in the remainder of the half with Jono Lance coming with in millimetres for the Reds.

But both teams seemed more intent on trench warfare and open rugby, except for a few glimpses, was mostly forgotten. The Rebels were  showing clear intent in defence and disrupted a truck load of Queensland ball. But the Reds had a mountain of possession to play with and controlled most of the game.

Cooper slotted 2 more penalties in the second half to take the final score to a comfortable looking 23-13. But clearly it was anything but comfortable. The Rebels had come to play and we can only wonder what might have happened if Beale had taken his place alongside O’Connor.

There were some big moments in this game. Digby Ioane’s run down his wing. Jono Lance’s almost try could have made a huge difference to the game.

But I can’t go past Ged Robinson’s penalty for rucking Albert Anae. The TMO was asked to look at the footage of the incident and after view a pretty innocuous bit of mountain climbing decide to reverse the ruck penalty awarded to the Rebels. Moments later the Reds were deep in Rebels territory and nearly scoring. The Rebels went from nearly kicking for goal to defending the goal line and never really recovered.

Higginbotham was, annoyingly, everywhere. James O’Connor had a great game a flyhalf in a beaten side setting up his player all over the park.

But I’m going to give my MOTM to Queensland’s halfback Nick Frisby. Playing in place of Ben Lucas, Frisby was everywhere allowing the obviously still hurting Lucas to have a well earned rest on the sideline.

James O’Connor looked the goods at flyhalf. He distributed a lot more while still looking dangerous with the ball. His opposite number Quade Cooper took another step forward this week and controlled long patches of the game. Higginbotham worked hard and looked menacing. Anthony Faingaa looks like he’s been playing all year. And finally Digby Ioane made his usual impressive metreage. 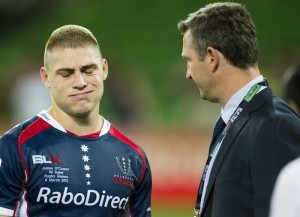