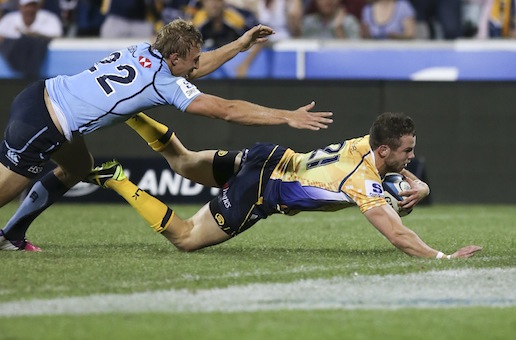 The Brumbies and Waratahs finally went to battle on the field after a week of back and forth barbs from the respective coaches.

The mind games went a step further even on game eve with the Waratahs ‘late’ to the final training session in Canberra to delay the Brumbies and show them a metaphorical middle finger.

The Waratahs started off in their usual fashion struggling to get into the game and after only eight minutes found themselves down 9-0 on the back of three Lealiifano penalty goals.

Disaster struck for both sides early on with the home side losing David Pocock with a suspected ACL injury after only 12 minutes, and the Waratahs losing Tatafu Polota-Nau at the same time. With TPN going off their set piece suffered.

The Tahs didn’t have much of the ball early on but finally got on the board with a McKibbin penalty as they started to get into the game.

The Brumbies then scored the opening try after new Tahs fullback Ben Volavola got in a tangle right on the tryline and gave away a penalty. From the resulting lineout the Brumbies captain Ben Mowen rolled over from close range.

The Waratahs blew their chances with some poor attacking lineouts and also failing to find touch from a midfield penalty one one occasion. Not long after the Brumbies extended their lead with a try to Christian Lealiifano after a kick through from Jesse Mogg. 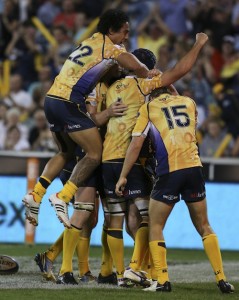 In the shadows of halftime referee Jonathan White lost patience with the Brumbies and yellow carded Sam Carter for repeated infringing and with that McKibbin added to the Tahs score to make it 21-6.

The second half didn’t match the first half in intensity but still provided some action.

The Tahs pushed for the line after declining shots at goal but were repelled by an excellent Brumbies defence that has not conceded a point in the second half in their three matches so far.

Neither side could get on top of the other with the first real excitement not until 10 minutes remaining when both Ben Alexander and Benn Robinson sent to the bin – Robinson for foul play and Alexander for stamping.

The Brumbies kicked for touch on two occasions following penalties and their dominance finally paid off when winger Henry Speight dived over to the put the game out of the Waratahs reach. And with just two minutes remaining, Jesse Mogg set up Robbie Coleman to secure the Brumbies a bonus point with their fourth try of the night. These two tries probably flattered the home team as the Tahs were trying to chase the game.

The Brumbies head to the Republic with a few injury concerns whilst the Tahs need to regroup before taking on the Cheetahs and Pretorius B.I.G.

Nothing really changed the match in either teams favour but Ben Volavola’s mistake at the back setup the Brumbies first try of the night.

Jesse Mogg – should be in contention for Wallaby fullback if Robbie Deans was watching. 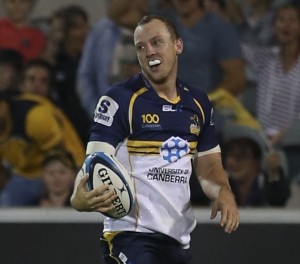 Possible disaster for the Wallabies with David Pocock going off with a suspected ACL injury on his left knee. To make matters worse, Tatafu Polota-Nau also left the field limping in the first half.