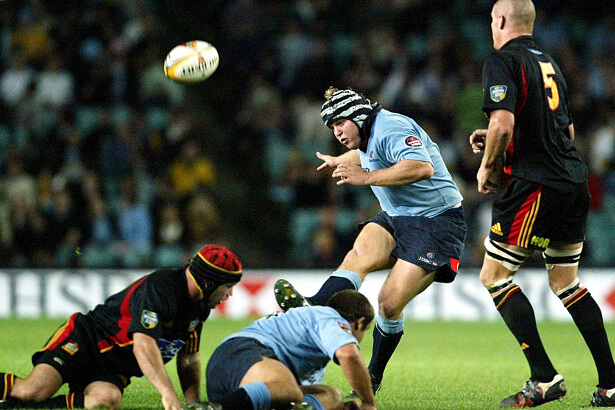 The Chiefs’ had one of those weeks. Good – home game, Bad – Have to fly back from Africa to get there, Good – Have their All Blacks back, Bad – didn’t get a full weeks training. How will it effect them? Probably not at all. The Waratahs flew to the Tron brisling with confidence fresh from their drought-breaking win over a Kiwi side (any Kiwi side!) with only the return of their Wallaby halfback Nick Phipps stopping an unchanged team running out.

The Waratahs started the game with two perfectly executed set piece moves resulting in tries to Cameron Clarke and Curtis Rona. 15 minutes in the Tahs were up 14-0. But then a few mistakes crept into the Waratahs game. Nick Phipps kicked out on the full gifting the Chiefs possession in the Tahs 22 and soon after they scored their first try. Then both Foley and Folau failed to find touch gifting the Chiefs the dreaded broken field possession. Then the Waratahs moved the ball from one side of the field to the other without committing one Chiefs player and then took the ball into contact but didn’t have the players to support the tackled player. Suddenly it was halftime and the Chiefs were leading 19 – 14.

The Chiefs stretched their lead at the beginning of the second half, but the Tahs came back and evened up the score. The Chiefs scored an unconverted try to Tony Pulu and the Waratahs kicked a penalty to stay in touch 29-27 with 12 minutes to go. The Waratahs have matched the Chiefs everywhere except kicking from hand with Phipps, Beale, Folau and Foley all gifting possession and territory to the Chiefs at critical times. With ten minutes to go Foley tried to bite off too much territory and the Chiefs went within metres of scoring under the post to put the game beyond the Tahs reach. With six minutes to go Hooper gave an openside flanker penalty to allow the Chiefs a five-point lead. Damian McKenzie stole the Waratahs bonus point after the hooter after some surprisingly feeble defence to make the final score a little more respectable.

This was a top-notch, entertaining game. Well worth a look at the replay if you missed it.

I went on a little in the Match section about kicking from hand from the Waratahs. It may be a little rough to say that was the game changer but with two evenly matched sides it’s little things like that that make a difference.

A great performance from both sides and that makes it difficult to pick individuals out. My pick is Damian McKenzie steered them around beautifully. He’s our MOTM

I have to mention the wingers. Cameron Clarke put his hand up, but Taqele Naiyaravoro didn’t. The Chiefs used his size against him and made a lot of metres up his wing and Pulu had a field day. Besides that all the usual suspects put their hands up.