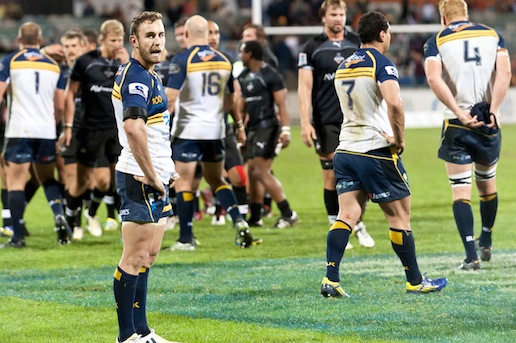 The new boys of Super Rugby rolled into Canberra to take on the Brumbies, who had made a number of changes to their starting lineup for this match. Despite winning only one game, the Kings have shown they can be competitive.

After three straight games against South African opposition, Brumbies coach Jake White mixed things with the lineup and also welcomed back Pat McCabe from a neck and hamstring injuries. 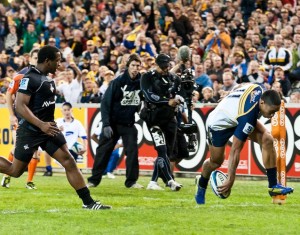 The Brumbies showed their intent early on with the majority of the possession and were able to convert the opening points through a Christian Lealiifano penalty goal after just five minutes.

With Robbie Deans watching on, the Brumbies were keen to convert the early territory and scored the first try through Henry Speight in the right hand corner from a nice grubber from Christian Lealiifano.

The Kings were struggling for field position and shortly after Brumbies extended their lead with scrum-half Nic White throwing a magical cut out pass for Joe Tomane to score down the left hand side.

The visitors showed they wouldn’t stand by and watch and got their first try of the night after finally getting their hands on the ball. Prop Schalk Ferreira was awarded the try via the TMO after he burrowed over from close range, and it was at this point the momentum started to swing to the visitors’ favour.

And to prove they meant business they added another on the back of a fantastic penalty kick from George Whitehead that landed only five metres out from the Brumbies’ line. From the resulting lineout, the Kings rolled a maul and flanker Wimpie van der Walt got up with the ball. The lead was cut to just two points.

The second half started with the Brumbies dominating the possession but their execution was letting them down and it only took one mistake for the Kings to pounce and score again. This time the Kings’ number 8 Cornell du Preez was the beneficiary and remarkably the Kings took the lead 21-19.

The Brumbies were able to stem the flow of Kings points and got their noses  back in front with a Lealiifano penalty as the crowd started to get very nervous.

The Kings’ defence was a real feature of their play with quick line speed, likewise their ability to hold the ball runner up off the ground and slow the Brumbies’ ball down.

They showed more of their strong defence repelling each Brumbies raid and pressuring them into errors.

The Kings then lost Schalk Ferreira to the sin bin for repeated infringements and it appeared their chances of winning went with him. They did have a chance to reduce the margin to one point but the penalty shot missed as the game came down to the wire. 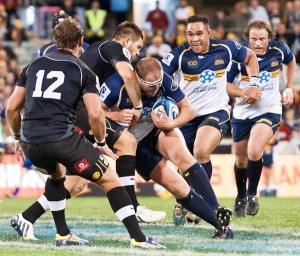 The Brumbies also had their chances to put the Kings out of range but also missed shots at penalty goal and it took until the 78th minute for the Brumbies to feel at ease as Lealiifano landed another penalty, courtesy of the left upright.

But there was more to come as the Kings played well after the siren and had a series of penalties and it took a look from the TMO to give them a shot at the draw with Ben Alexander penalised for a hit on Steven Sykes after they had already won a penalty that would have won them the match. The resulting play saw Cornell du Preez dive over for his second of the night with Demetri Catrakilis stepping and landing the conversion to give the Kings a well-deserved draw and three competition points for their four tries.

The result has a huge bearing on the Australian conference, with the Brumbies gaining just two points for the draw and the Reds gaining four points with the bye.

Well after the final siren the Brumbies’ Ben Alexander was penalised for an off-the-ball hit on Steven Sykes. From that the Kings dived over the line to give them a shot at a draw.

The Kings’ forwards put on a great defensive display with Wimpie van der Walt  the stand-out.

Robbie Deans wouldn’t have seen too much to get excited about but Christian Lealiifano and Nic White performed well and Pat McCabe made a good return after a long time out.