Reds swept up by Vol-Kaino 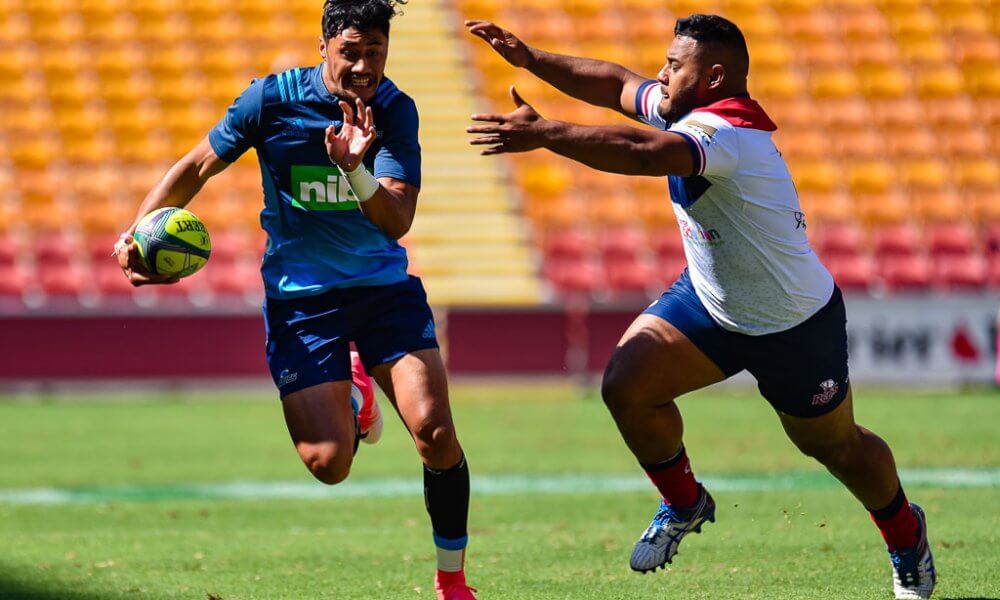 Reds swept up by Vol-Kaino

As I make the step up to the adult table and progress to the wide world of match reports, the Queensland Reds looked to come back from the June International break with a promising performance against a Blues side that has struggled mightily and hadn’t won a game at home all season.

It was cold clear night at Eden Park, as Jerome Kaino played his last home game before his move to France at the end of the season. In a classy move, the Reds joined the Blues in forming a tunnel to clap the warhorse onto the field. It was a shame to see so many empty seats but given the respective positions of both teams, not a surprise.

After Kaino (perhaps with a tear in his eye after such a touching gesture) spilled the kickoff, the Reds won a penalty straight up from the scrum, Tupou powerfully forcing Alex Hodgman to the ground. Lance slots the penalty and the Reds are up 3-0.

The next ten minutes were more like an episode of the Three Stooges minus the comedic sound effects, as both teams either dropped the ball or turned it over at a ruck at an alarming rate. The heavy dew was the likely culprit but you would expect more from two professional sqauds.

At the tail end of this period, a lineball penalty call in a ruck saw Stephen Perofeta slot a penalty. Three all after twelve minutes. The signs weren’t looking good for the Reds at this point, no impact in their attack and when the Blues did hold onto the ball they were over the gain line with alarming regularity.

Just after the restart, Tupou earns another scrum penalty, (note to reader- there is a theme here), Lance converts the shot and it is 6-3 after 15. Sadly for Reds fans, this is the point where the Blues figured out how to hold onto the ball. A few minutes of solid phase play and many metres gained eventually told and a ball out to Melani Nanai on the right wing saw a neat finish and Eto Nabuli clutching at thin air. Try Blues, with Perofeta missing the kick. 8-6 Blues after 20. The Reds continued having little care for the ball, Sorovi in particular playing with flagrant disregard for ball security.

At this point Ben “I miss the sound of my own voice” Skeen intervened and a relatively innocuous lift in a tackle by Jordan Petaia saw him given a yellow card. Not content with that Skeen, two minutes later, Skeen decided that Taniela Tupou has executed a grass cutter tackle and he too earnt himself a spell in the naughty chair. Scott Higginbotham did well to not have his head explode at this point, but now had to lead his men through a tough spell With the Reds down to 13 for eight minutes you would expect a half decent team to punish them, and that is exactly what the Blues did.

After Perofeta added a penalty, three phases from the kickoff and the very dangerous Rieko Ioane broke away and beat three despairing defenders to dot down. Perofeta missed the conversion but it was now 16-6 to the Blues and things were spiralling for Queensland. Worse was to come shortly after the kickoff when another long break was backed up by hooker Matt Moulds who scored next to the posts.

Again, Perofeta very kindly missed the conversion but it was 21-6 and the damage was done. As halftime approached the Reds tried to piggbyback themselves down the field on the back of five penalties, but an inability to hold the ball for more than three phases saw them spill it close to the line and we are off for oranges and it is 21-6. Early in the second half and Tupou monsters Hodgman again for another scrum penalty. Pop Quiz- How many identical scrum penalties do you need before someone gets a yellow card? The answer we will never know as Hodgman gets the hook after conceding four.

Brad Thorn was clearly having conniptions at this point as Moses Sorovi and Hamish Stewart both get pulled after Perofeta kicks another penalty. 24-6 Blues after 46 minutes.

After some comically bad ball handling results in more pressure and yet a scrum in front,  Perofeta goes over from the a simple set piece  it is 31 6 Blues after the conversion and I am truly regretting saying yes when Rugby Reg asked me to cover the game. At this point the Reds had barely seen the Blues half and definitely hadn’t make them work very hard in defence.

Finally in the 62nd minute, some concerted attack and ball security saw the ball spun wide left after some bullocking runs by Caleb Timu and  Duncan Paia’aua scores out wide. Lance missed the conversion and at 31-11 the game still had a sniff of hope, especially as Matiaha Martin found himself on the end of a yellow card for repeated infringements.

The scrum penalties continued to mount and as we reached seven in total we had to wonder how many would see someone go. Seemingly the answer was eight as Sione Mafileo finally had a card waved at him. Oddly he seemed shocked that eight penalties would result in such a punishment.

With two in the bin, would the Reds be able to make the Blues pay in the same manner as earlier? Short answer is no. A poor inside flick pass option from Aiden Toua saw one chance go begging and a lack of clear direction was evident. Eventually the Reds earnt a penalty (from another scrum) and oddly Lance kicked for the line. Fortunately Alex Mafi was on the back of a good driving maul and the Reds were over. 31-16 Blues but with only eight minutes left, it was as good as over.

Unfortunately the Blues didn’t think so, another penalty this time Gatland saw it 34-16 and then in the dying minute, a Tate McDermott force back in cover defence saw young gun Caleb Clarke go over after the ensuing 5m scrum. 39-16 to the Blues and in a fitting finale, Jermoe Kaino horribly shanks the conversion attempt and that’s how it ended.

All in all a disappointing performance by the Reds who would have been expecting a lot more from themselves against a struggling team.