Rebels Snatch Defeat from the Jaws of Victory 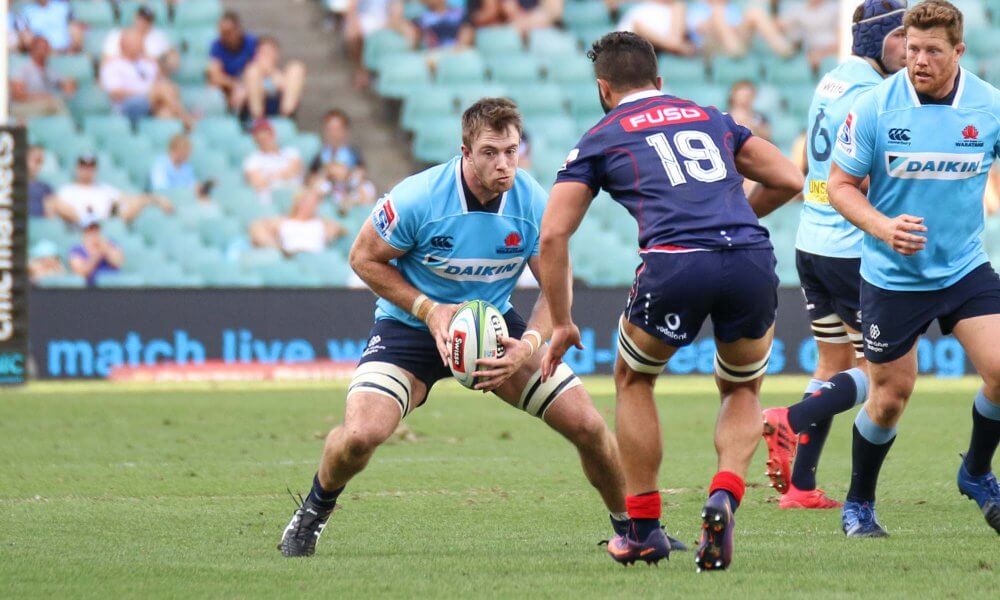 Rebels Snatch Defeat from the Jaws of Victory

The battle for the top of the Aussie conference proved a memorable one at AAMI Park as the Waratahs emerged victorious in a come from behind victory over the Rebels.

The Waratahs failed to secure the opening kick off and from there the Rebels piled on the pressure through some strong ball carries which ultimately resulted in the Waratahs conceding a penalty and Reece Hodge kicked the Rebels to a 3 – nil lead.

The next 10 or so minutes featured plenty of errors from both sides. The Waratahs were impatient and looked to spread the ball wide before they’d generated any quick ball or forward momentum and made little headway as a result. The Rebels were making plenty of metres through their forward runners but couldn’t maintain their composure for long enough periods.

In the 16th minute the Waratahs won a turnover and then Bill Meakes produced a stupid professional foul kicking the ball from Nick Phipps hands at the breakdown whilst he was lying on the ground. Referee Nic Berry had no hesitation showing the slice of cheese and the Tahs had a one man advantage. It was the impetus to get the Waratahs into the game with a scything run a couple of minutes later from Kurtley Beale resulting in Taqele Naiyaravoro strolling over untouched for his 12th try of the season, equalling the club’s season record.

With the score 10-3, the Rebels struck back with a brilliant first phase try from a lineout on the Waratahs 22 just 5 minutes before half time. Rangi threw to Philip at the front, Ruru threw a long cut out pass to Meakes who drifted out before passing, cutting out Tom English who ran a good line to hold Curtis Rona in defence to find Dane Haylett-Petty who sailed through the gap created between Rona and Naiyaravoro to score untouched.

The tied game was short lived however with the Tahs scoring a great team try only a couple of minutes later. A half break by the Rebels finished with a poor kick through by Naivalu which was fielded by Foley. The Waratahs spread the ball left making some metres and from the next phase with the entire field to their right, the Waratahs went wide. Rona managed to run around Amenaki Mafi before putting Michael Wells into space. Wells drew the fullback, passed to winger Alex Newsome who then threw a beautiful inside pass finding Will Miller backing up to finish a great team try. 17-10 Waratahs.

With time running out in the first half the Rebels had a golden opportunity to hit back after a tackle busting break by Sefa Naivalu. With the try line wide open Angus Cottrell dropped an absolute sitter.

It was all Rebels early in the second half. After some sustained pressure the Waratahs gave away a penalty. The Waratahs were slow to react and a quick tap 10 metres out finished with Michael Ruru sneaking over for a try and the scores were level. From there, a combination of strong ball running led by a peerless performance from Matt Philip and some ill-discipline from the Waratahs allowed the Rebels to extend the lead through penalty goals to Reece Hodge.

After the June test series resulted in far more refereeing and TMO controversies than anyone would like to see and just an hour earlier the Blues vs Reds game in Auckland was Ben Skeened from the TMO booth, the TMO again decided to get involved. With play going on, Damien Mitchelmore said he had a foul play incident for Nic Berry to check. What happened from there can only be described as farce. The incident to be reviewed was many phases earlier when Rebels hooker Anaru Rangi ran the ball from the back of the lineout before slipping over and falling fairly softly into Bernard Foley. The issues to be looked at apparently were whether Foley had used arms in the tackle and connected high. No fewer than six replays were looked at before Nic Berry eventually decided it was a penalty at worst and the play went back up field to where the Rebels originally had a penalty for a Waratahs infringement. An absolutely ridiculous interjection by the TMO and the Rebels extended their lead to 26-17 for a penalty that had nothing to do with the Rangi/Foley collision.

With the Rebels looking firmly in control of proceedings, somehow the Waratahs began to find a way back. A Kurtley Beale break was the first signs of life for the Tahs in the second half and then a high risk intercept from Beale propelled the Waratahs into attack. Beale knocked the ball up and then managed to secure it on the second grab. If he hadn’t, it would have been a yellow card with the Rebels on attack. Instead, Ned Hanigan scored a few phases later with a powerful run through Matt Philip and Ross Haylett-Petty from close range. The only blemish on an otherwise phenomenal game from Philip.

Still holding onto a two point lead, the Rebels threw it away, quite literally with Bill Meakes passing an intercept to Bernard Foley who ran 50 metres to score and give the Waratahs the lead. The Rebels still had chances but a key turnover to Ned Hanigan diffused one attack and then from an ensuing penalty, the Rebels again peppered the Waratahs try line before the ball was reefed loose in a tackle and Will Miller dived on it for the Tahs with a couple of minutes left. Rather than clearing their lines, the Tahs opted to try and run out the clock with a whole two minutes left from their own try line. It was obvious this wasn’t a good option and predictably with just 10 seconds left the Waratahs were pinged for holding on and the Rebels had one final chance to win the game. A lineout on the 5 metre line and the Tahs were under immense pressure but Will Miller managed to rip the ball away from Lopeti Timani and the ball was kicked into touch and the Tahs were victorious.

Despite the Waratahs scoring four tries to two, this was a game the Rebels really should have won. They dominated much of the game and squandered a number of opportunities. They blew a substantial lead and then when handed the opportunity to win the game at the death couldn’t execute. Their season isn’t over but you’d imagine they have to win their last two games to seal a wild card spot.

For the Waratahs, their lead on top of the Aussie conference is now four points and with two home games to finish against the Sunwolves and Brumbies, their destiny is in their own hands.

This was a classic Aussie derby with both teams willing to attack at every opportunity. Despite some errors early in the game it built nicely and turned into a great game. Worthy of an Australian conference decider and the result was still in contention after the full time siren.

With about 12 minutes left and the Waratahs down by 9 points, all the momentum was with the Rebels. Kurtley Beale took a high risk intercept on the second grab that resulted in a try to Ned Hanigan a minute later. If he hadn’t completed the intercept it would have certainly been a yellow card and the game sealed for the Rebels.

In a match the Rebels dominated for long portions, Matt Philip was immense. With 20 runs, close to 100 run metres, 2 clean breaks and a number of defenders beaten and offloads, he savaged the Waratahs defence all game. Topped all players for run metres.
For the Tahs, Kurtley Beale was instrumental in bringing the Waratahs back into the game and ultimately delivering the win for the men from New South Wales.

Matt Philip will push hard for a spot in the Bledisloe Cup squad if he can finish his season with a couple more strong performances. In a game that featured plenty of stars, he was a standout.