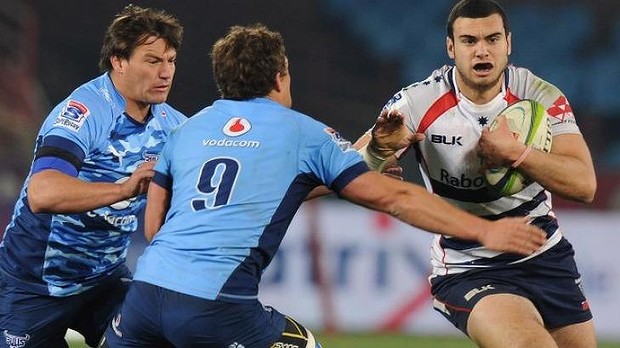 The Melbourne Rebels have earned their second wooden spoon in four years of Super Rugby, suffering a 40-7 drubbing at the hands of the Bulls in Pretoria.

The Bulls got the first points on the board in the seventh minute, after the Rebels were caught offside at the breakdown. Handre Pollard converted an easy kick to give the Bulls a 3-0 lead.

The Rebels missed a chance to even the ledger three minutes later, when Jack Debreczeni sent a penalty wide.

The Rebels were keeping pace with the Bulls, and took the momentum when Paul Willemse was yellow carded in the 16th minute.

Though the Bulls added to their lead minutes later when Pollard converted another penalty, the Rebels took their chance when Cadeyrn Neville took a tackle, and passed the ball off to a running Jack Debreczeni, who touched down underneath the posts for his maiden Super Rugby try. Successfully converting, the Rebels led 7-6 after 25 minutes.

The superiority would be short-lived, Alex Rokobaro conceding a penalty as Willemse rejoined the game. Pollard kicked truly and the Bulls regained the lead, 9-7 after 27.

The Rebels were beginning to lose their shape, and their discipline, as it has on several occasions this season, was wearing thin. Another penalty to the Bulls took them to a 12-7 lead, before captain Scott Fuglistaller was sent off by the referee for repeated team infringements.

Jack Debreczeni had a chance to pare the margin back on the half-time siren when Marcel van der Merwe was caught off his feet in a ruck. He missed, and 12-7 was where the scoreline stayed at oranges.

The Bulls still had a man advantage as the second half commenced, and it took just two more minutes for them to capitalise, Paul Willemse crashing through the Rebel defence to score the Bulls’ first. Pollard converted to make the score 19-7 after 43.

Though the Rebels were rejoined by Scott Fuglistaller shortly after, they had lost control of the match, and the Bulls, out of finals contention but keen to atone for an average year, never looked like letting them back in. Paul Willemse scored his, and the Bulls’, second try of the match in the 52nd minute, and on the hour, Francois Hougaard received a wide pass and they had three. Both were converted, and the Rebels were cooked.

The visitors had no response to being so comprehensively outplayed, and resorted to cheap penalties as a way of stemming the flow of the game. It had little effect, Dean Greyling scoring near the full time siren for the bonus point try. Potgieter took the last kick and succeeded, ending a 40-7 romp for the Pretorians.

Scott Fuglistaller’s yellow card exposed the Rebels’ lack of both leadership, and a clear Plan B. Without their stand-in captain, they were a rudderless ship, and had no answer to the attacking pressure of the Bulls. Good teams have a clear back-up plan that players know to default to when things go wrong. The Rebels don’t.

Colby Fainga’a was great for the Rebels. He has grown into a really dangerous player at the breakdown this year, and showed it again against the Bulls, piling on the pressure and winning possession when it was at a premium for the visitors.