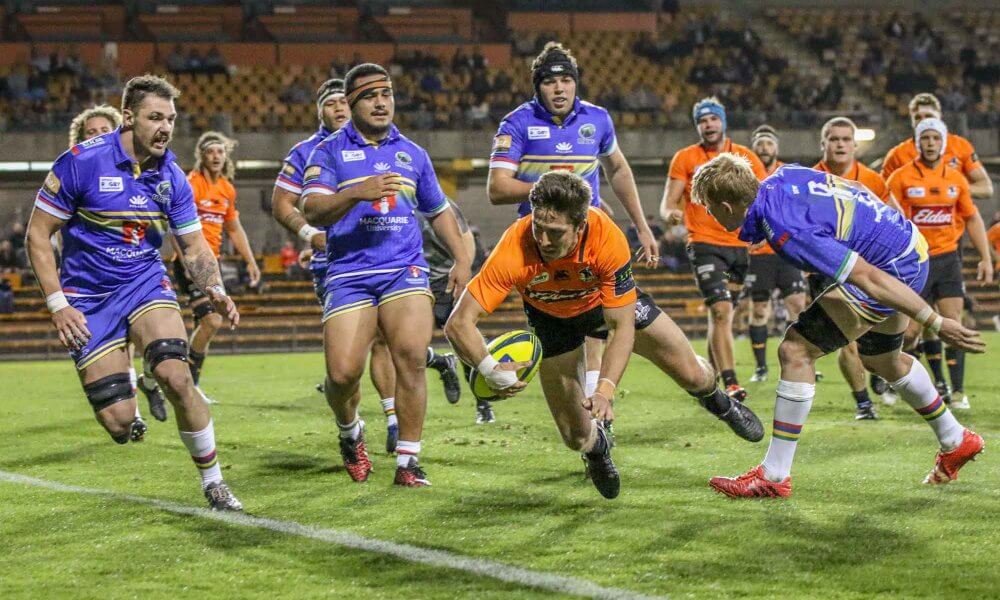 The NSW Country Eagles have notched up their first win of the season, out-muscling the Sydney Rays to win 19-33 in Sydney.

In a revisit to the classic city City-Country rivalry, both teams put on a bruising display of footy at Leichardt Oval on Wednesday night. In the end, it was a hat-trick to Jake Gordon and the Eagles scrum who proved the difference.

Both teams came into this fixture winless, with unimpressive previous performances and a aura of controversy following an explosive article that poked holes in the NSW NRC teams by a former player on the Roar.

Everything that the unnamed player has mentioned has, up until this point, been confirmed. The Rays had shown glimpses of potential in their first two games, but when you concede 115 points in two games, you won’t win many games. Scores were telling, with floggings dished out at the hand of the Vikings and Brisbane City, despite a respectable comeback in the second half of the latter game.

The Eagles had fared just as badly, conceding 116 points in their two games with a respectable loss to the Force, and an embarrassing demolition at home by the Melbourne Rising. Add to the fact that this was their second game in four days, and things weren’t looking good for the country lads.

But with this fixture came a small sense (not the least of which that NSW grab a win this year) that a traditional rivalry of City-Country was about to resurface. And, on a cold, windy night in Sydney, a respectable crowd of just over 1,000 watched these two sides do battle. 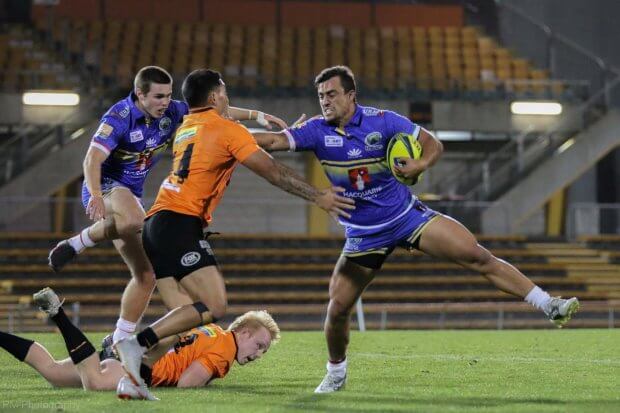 Tyson Davis palms off the defence.

It was a slow start to the affair, with the opening ten minutes of the match a hit-up between the two forward packs. Despite some promising signs from the Rays, the Eagles experience at set piece was already showing their class over the younger counterparts. When the Rays tighthead Cam Betham was shown the cheese by ref Angus Gardner in the 12th minute, the Eagles made use of the one-man advantage and Jake Gordon darted through the Rays defence for the first points on the board. Mack Mason knocked over the conversion, and the away side were up by 7.

Six minutes later, the Eagles soared again with a long range team try that was finished off brilliantly by Alex Newsome. But the Rays weren’t going away lightly, and only two minutes later got their first try of the night through a bit of magic by Harry Burey that led to Curtis Rona diving over to score. Will Harrison missed the conversion, and the score was 5-14.

Damien Fitzpatrick looked to be rallying the troops through a couple of courageous runs, and one lead to a penalty and yellow card to Eagles second-rower Emmanuel Meafou. However, with a penalty in a favourable position and a one-man advantage, the Rays lack of experience showed and they failed to capitalise. They were to pay for it eight minutes later, when some lapse defence down the other end of the field saw Tolu Latu brush aside players with ease to score between the sticks.

At this point, a sizeable gap was starting to open up, and it would take a bit of brilliance for the Rays to come back now. Enter, Shambeckler Vui. There is nothing more beautiful in this world than a prop out-running everyone to score like a back, and that Vui did, swan-diving beneath the sticks to cut the margin back to nine points going into the break. 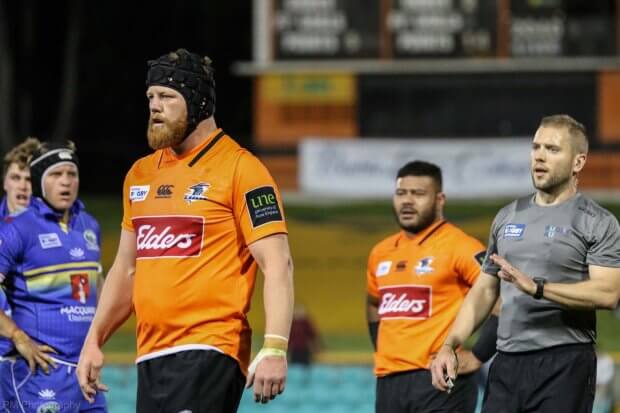 The second half started exactly the same as the first ended, with Vui once again going for another tackle-bursting run that nearly saw the big man grab a double, only to lose it over the line and let the Eagles off the hook.

The match settled into an arm-wrestling affair for much of the second half, with the Eagles dominating at scrum-time (with Sekope Kepu coming on for Paddy Ryan earlier in the first half), and the Rays holding on through resilient defence work and making use of the wind. This half also saw some stinging defensive hits from both sides that will definitely make the highlight reel at the end of the year.

Eventually, in the 63rd minute, the Eagles dominance at scrum-time proved too much and Jake Gordon peeled off the scrum to score his second try of the match. The Eagles were beginning to show their class now, and eight minutes later Gordon took advantage again through a quick tap to score his third. Mason missed his first conversion of the night but the match looked all but sealed, with the Eagles up 12-33 with a bonus point on offer.

The Rays would have the last laugh though, denying the Eagles the bonus point with a final effort. Their hard working back line were rewarded for their efforts in the 76th minute, with number 8 Hugh Sinclair the beneficiary to go in and score the Rays third. Harrison converted, and despite some dangerous attacking plays from the Rays in the final minutes, the score remained unchanged at full time. 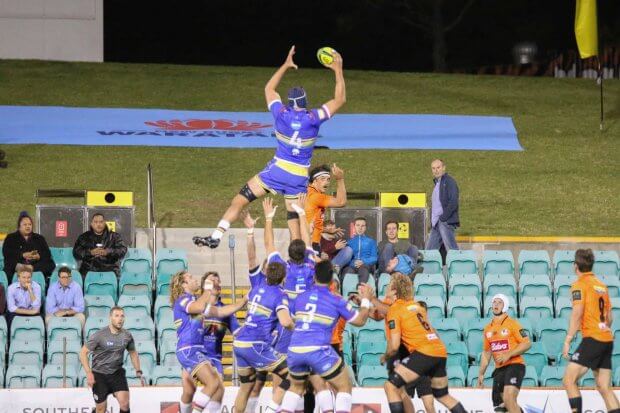 Simmons was a class above in the lineout.

It was a match that saw both teams play their best rugby all season, but also showed that both sides have a long way to go to beat the best in the competition.

Starting with the hosts, tonight was a key example of not taking advantage of their opportunities. Multiple times the Eagles provided the Rays a chance to capitalise, and multiple times it went unrewarded. There are a lot of positives for the Rays to take out of this game though: their backs looked much improved and a lot more dangerous, and Shambeckler Vui stomped his authority on the game, giving them a sniff with multiple runs. They’ll need to improve a lot in the next few days if they are to be competitive against the Fiji Drua in their final home match on Sunday at Concord Oval.

The Eagles however, will take a lot out of this game. They are still to drop a game against their City rivals, and this match was won off their forward dominance, which looked eerily familiar to the Eagles of 2016. Jake Gordon was best on park though, directing traffic brilliantly and taking the opportunities the forward pack presented. Discipline however remains a key issue, and they presented the Rays opportunities that, if they were coming up against stronger opposition, might have seen the game go a different way. They will travel to Armidale to host one of the strongest teams in the comp in the Canberra Vikings this weekend, their third game in eight days.

The Rays not taking advantage of a one man overlap and ideal field position following the sending of Emmanuel Meafou to the bin. Their lack of experience together showed and, had they scored a try in that moment, could’ve turned the game on it’s head. When the Eagles scored eight minutes later, the Rays wouldn’t come close again to winning it.

With three tries to his name and outstanding performance at scrumhalf, who else can it go to but Jake Gordon. While those tries came off the back of his forward pack’s dominance, Gordon played an instrumental role in every part of the field tonight, helping the Eagles back line hold their own against the Rays, and asking plenty of questions in open play. Special mention should go to Tolu Latu, who picked up a try himself and was a mongrel in defence tonight.

Again, a no-brainer for this one. Shambeckler Vui was phenomenal for the Rays this evening, with many tackle bursting runs, a try and a best-on-park performance in a losing side. He has been hanging around the Waratahs this year following moving from the Force, and the years of quality rugby is starting to show on him. Reckon the Tahs should hold onto this young gun based on what we saw tonight. 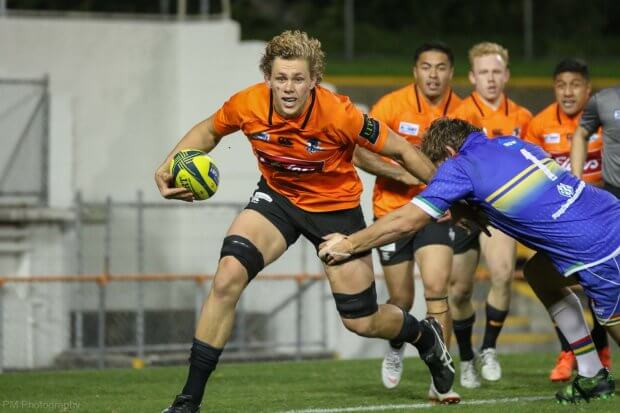 Ned Hanigan running it out of his own in-goal.