NSW Country and Brisbane City locked up in Orange 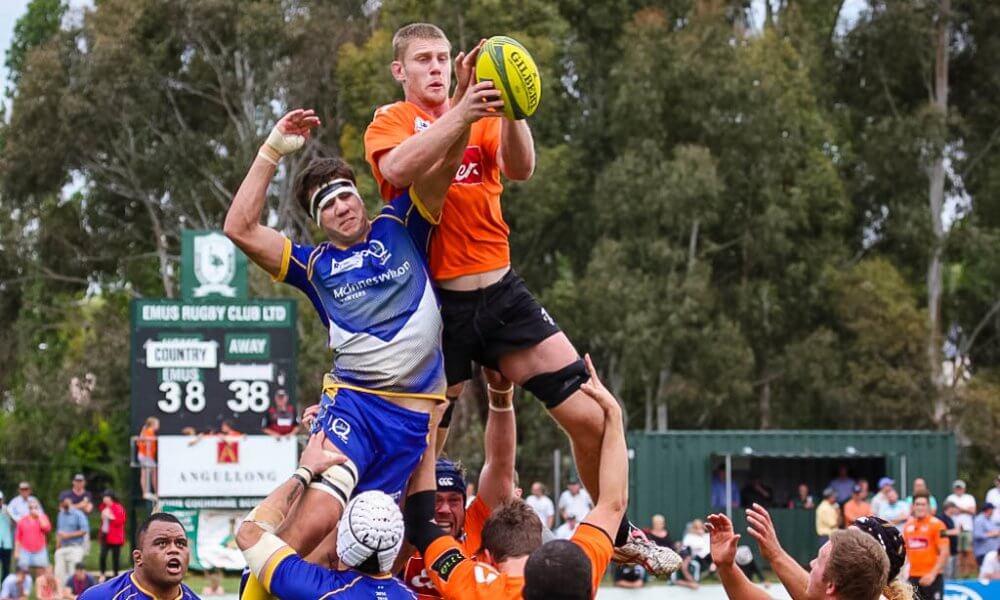 NSW Country and Brisbane City locked up in Orange

Orange Emu’s home ground has certainly changed since I was last there in the 1980’s. Field in great condition, a fancy new grandstand, all amenities. This is no nostalgic flashback though. Cold, wet, muddy, built in a swamp – I hated the place. Mind you, I hated most Central West grounds in Winter – Bathurst, Lithgow, Oberon, and don’t even get me started on Blayney – if you were lucky it was only raining – and no snow or sleet. Probably a bit of an insight there about why I now live in Queensland.

Memories of Endeavour Oval aren’t helped by a bad ankle sprain playing for Orange Emus and a broken nose playing against them (for the Mighty Yeoval Eagles), but the conditions were perfect yesterday for a exceptional game of rugby between the NSW Country Eagles and Brisbane City with a spot in the NRC final being on offer for the winner. The teams responded with tight contest which ultimately ended in a 38-all draw.

Brisbane looked to be on top early, with a good break by City lock Ratuva, but the one-handed pass to Kuridrani in support went to ground. Brisbane then spilt another ball close to the line, giving Country their first opportunity of the half. Brandan Paenga-Amosa (BPA) was the beneficiary of a strong run from Ryan McCauley, crossing for his first try of the day. 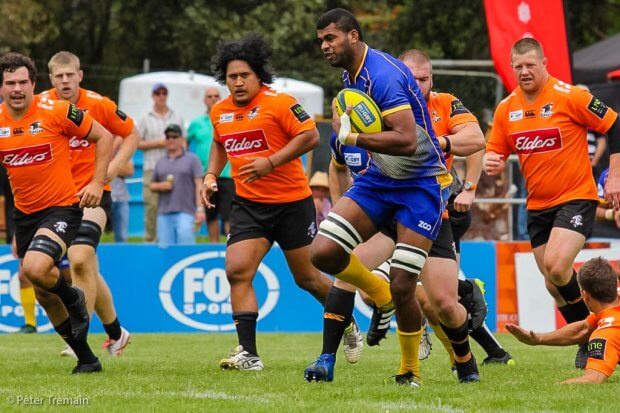 Play was soon down the other end though, with Laloifi regathering a Frisby kick, followed by a succession of penalties. City were playing with another penalty advantage when Frisby chanced a cross-field kick-pass to Laloifi. The ball went loose, but referee Will Houston ruled Country fly-half Tayler Adams had deliberately knocked the ball forward, and into touch. Result – a penalty try to Brisbane and a yellow card to Adams.

From the restart, McCauley regathered and then won a penalty. Paenga-Amosa then scored his second try from the rolling maul off the line-out. Brisbane then looked to have blown a good chance late in the half, but a loose ball allowed Frisby to throw a long pass to an unmarked Laloifi to score. 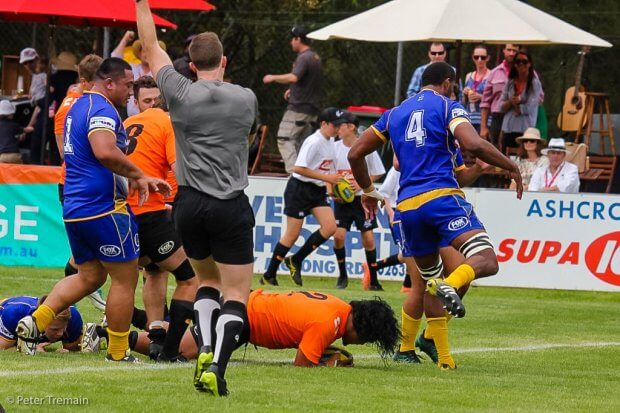 With only a few minutes left in the half, NSW Country probably thought they had done enough to take the lead into the sheds. But then Frisby pinned them into their own 22 with a long touch-finder. Adams then opted to run the ball, when a kick to touch was the safer option. A penalty was conceded and Brisbane crossed for their own rolling maul try to Pat Morrey.

The second half started with another rolling maul try to NSW Country, giving Paenga-Amosa his hat-trick for the day. Paenga-Amosa was then unlucky not to pick up a 4th try, only being denied by a penalty try, with Pat Morrey being sent to the bin for collapsing the maul. 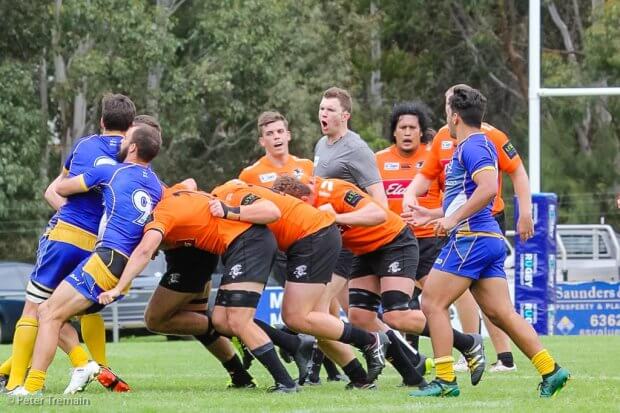 Country were literally on a roll, and leading 28-19. They then showed their running rugby style, with Adams putting Alex Newsome into a gap, resulting in Alex Gibbon racing 50 metres to score.

With 20 minutes to go, leading 35-19, after a sideline conversion by Adams, NSW Country looked to have it wrapped up, but when Laloifi pounced on a loose pass and won a 80m sprint to score, and Michael Gunn scored from a loose ball from a lineout, Brisbane were back in the game, trailing by 4 (35 – 31). 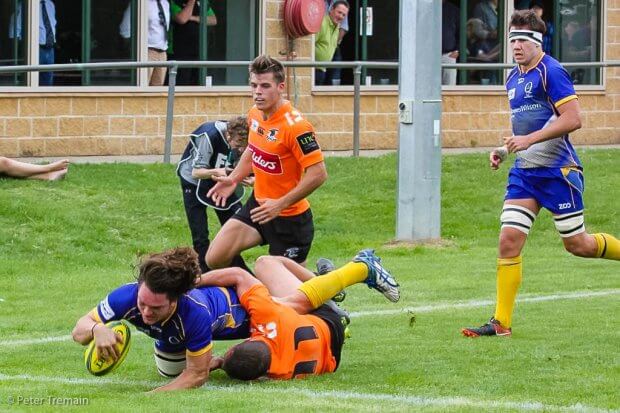 Brisbane were hot on attack, after a good run from Ngamanu, but a crucial turnover from Rowan Perry, relieved the pressure. This then allowed NSW Country to extend the lead to 7 via a Adams penalty goal.

With 3 minutes left, Laloifi was hit in a high tackle, and with the penalty advantage, Frisby threw it wide to Dylan Riley who beat 3 tackles, before passing inside to Chris Kuridrani to score under the posts. Conversion successful, and scores were locked at 38-all. 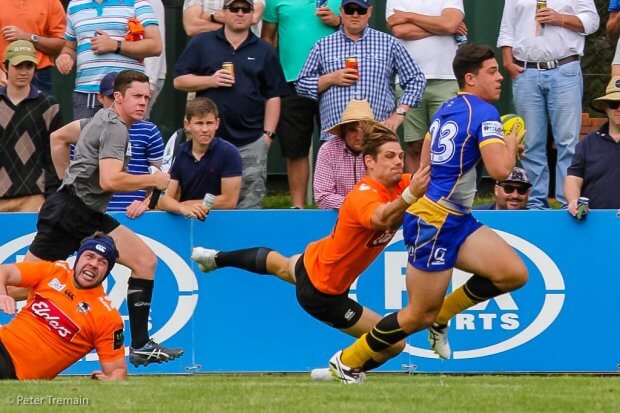 What followed was a frenetic 10 minutes, as the game ran almost 7 minutes overtime, with neither team wanting to settle for a draw. Penalties awarded, and turnovers won, kept the game alive with both teams threatening to go ahead. Finally, Brisbane knocked on in a messy ruck and referee Houston blew full-time.

The draw put NSW Country into 4th place, now having to wait on the result of the QLD Country v Perth Spirit to see if they can hold onto the final spot.

Lots of game changers, with momentum shifting, and the lead changing several times. My pick is a couple of Rowan Perry turnovers that stopped Brisbane when they looked very dangerous.

Nick Frisby was Brisbane’s attacking spark, but I think overplayed his kicking in the second half. Ryan McCauley asserted himself more than I’ve seen before, his involvements leading to 2 tries. But, it is hard to go past a hooker who scores a hat-trick. Brandon Paenga-Amosa was also the leading forward try scorer in the Shute Shield and gets the GAGR MOTM

Quite a few players getting a chance due to the Wallabies v Barbarians game clashing with the final round of the NRC. Tevita Ratuvua stood out, not only due to his height. Rowan Perry also had a big impact off the bench.

NRC 2017 Round 8 Preview
Spirit Haunt Country prior to Halloween