The Rams came into this fixture needing a win to keep their finals aspirations alive, with a bye in the last round this match is the last of their season. The Rising came in as the only team to have already qualified for the finals, they were fresh from their bye and undefeated all season, a six game winning streak. In a highly entertaining match the Rams showed how to play with desperation and never gave up. The Rising though showed us again why they are dominating the NRC, ultimately outlasting the Rams to win this see sawing fixture and increase their streak to seven.

Melbourne came out of the blocks dominating both possession and field position. It didn’t take long for that pressure to be converted into points. Debreczeni opened the scoring, showing and going from a close range scrum, then adding the extras.

The Rams fans seemed to accept their fate, with no ball and now the seemingly invincible Rising hitting their stride, fear rippled through the stands. Luckily though sometime captain Jed Holloway isn’t so easily intimidated, using his size and strength to bash over after some great build up play from the Rams. Volavola converted from the left touchline to bring the game back square and the crowd went berserk.

The home side was soon brought back to earth when Melbourne half back Nic Stirzaker made a great sniping run and with no full back covering streaked away to score next to the posts. Debreczeni added the extras and the visitors were again ahead 16-8 with under fifteen minutes gone.

But the Rams with the season on the line continued to fight. Alcock made 40 meters breaking tackle after tackle as he refused to be held, then beautifully offloaded to inside centre Taefu who drew another defender before putting midfield partner Seavula in. Inman unable to stop the huge thirteen from crashing over under the sticks. Volavola again converted and the game was again even with a quarter of the match gone.

Melbourne kept coming though and used their ability to spread the ball to either side, forcing an overlap which winger Kamana took advantage of. Debreczeni missed the difficult conversion and the league leader were up by five with ten to go in the first half.

The Rams continued to attack, backing themselves against their fancied opponents and the heat which most have been taking it’s toll in such an open game. Volavola found himself in space with a mazing run, managing to off load at the twenty two, with good forward support. Melbourne infringed after a couple of phases and Holloway took a tap and went close, only for Taefu to score with a pick and drive any front rower would be proud of. When Volavola converted the Rams were in the lead for the first time and the Rising found themselves behind at half time for the first time this season.

The second half saw Melbourne take ten minutes to regain their lead. Mitch inman scoring under the posts from first phase ball off a Melbourne scrum that was proving a handful for the hosts.

The Rams didn’t want to play catch up rugby for long though. Holloway was held up over the line, only for locking partner Dylan Sigg to score after constant attacking pressure. With another successful conversion the home side had some real hope, up by three with twenty five minutes to play.

It wasn’t to be though, Melbourne scored the next two tries, reserve half back Meehan finished an impressive line break by reserve prop Cruze Ah-Nau. The second scored when Luke Jones playing in blind side fell over the line after a great off load from Debreczeni. 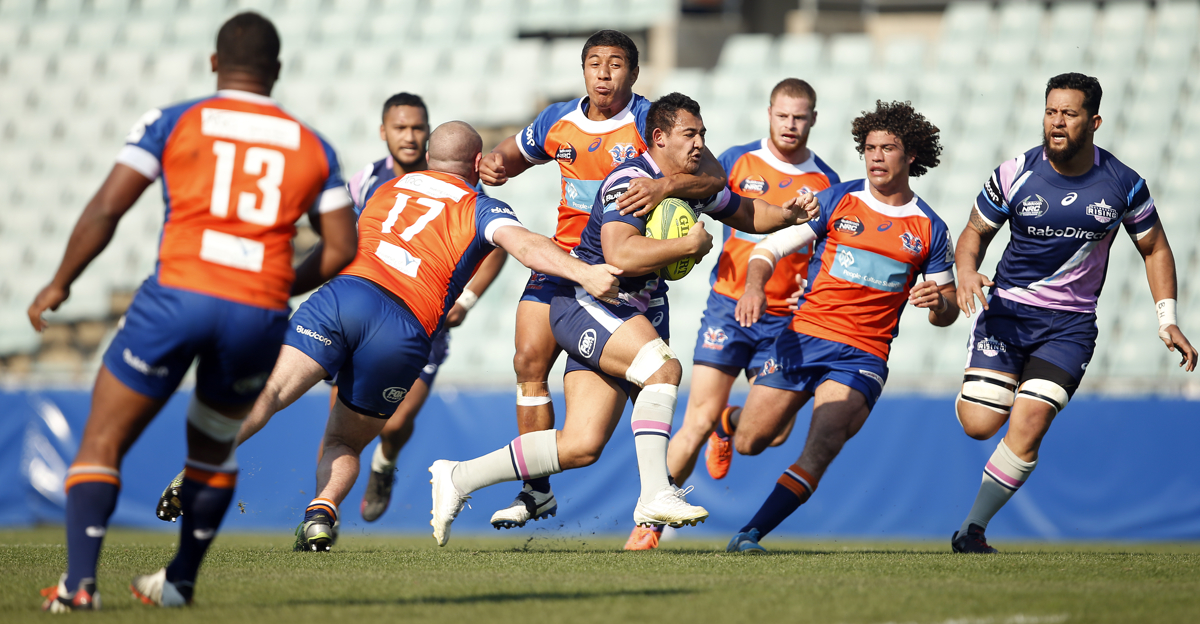 Down by ten with under ten minutes to play the Rams were still intent on pulling the match out of the furnace. They got their chance when Debreczeni failed to collect a fly hacked ball and Rams reserve prop Jed Gillespie put away flying winger Dane Chisholm. Chisholm could have easily scored in the corner but held up the ball, committing the last defender and gifting fullback Batger the opportunity to put it down closer to the posts, a play impressive in it’s intelligence and selflessness. Volavola kept his perfect record from the tee and the Rams were back within five points, although now only had five minutes to play.

With the game set up for a grandstand finish the Rising nixed any fairy tail notions almost instantly when classy full back Placid finished a good back line move to put the game beyond reach. He then back up to score his second of the match as the buzzer sounded meaning the final score doesn’t reflect the closeness of the match.

Melbourne march on, undefeated. The Rams season is over, but they got closer than anyone to beating the NRC leaders so should feel no shame.

Jonah Placid scoring immediately after the Rams put themselves in a position to snatch victory, it was a late dagger to the hosts.

Jonah Placid, put the game to bed and is all class. While in many ways inconsequential, his second try (on the buzzer) meant the Rising keep their win with a bonus point streak intact.

Taefu set up a try and scored another.

Holloway continues to impress this time at lock.

Alcock was seemingly impossible to put down.