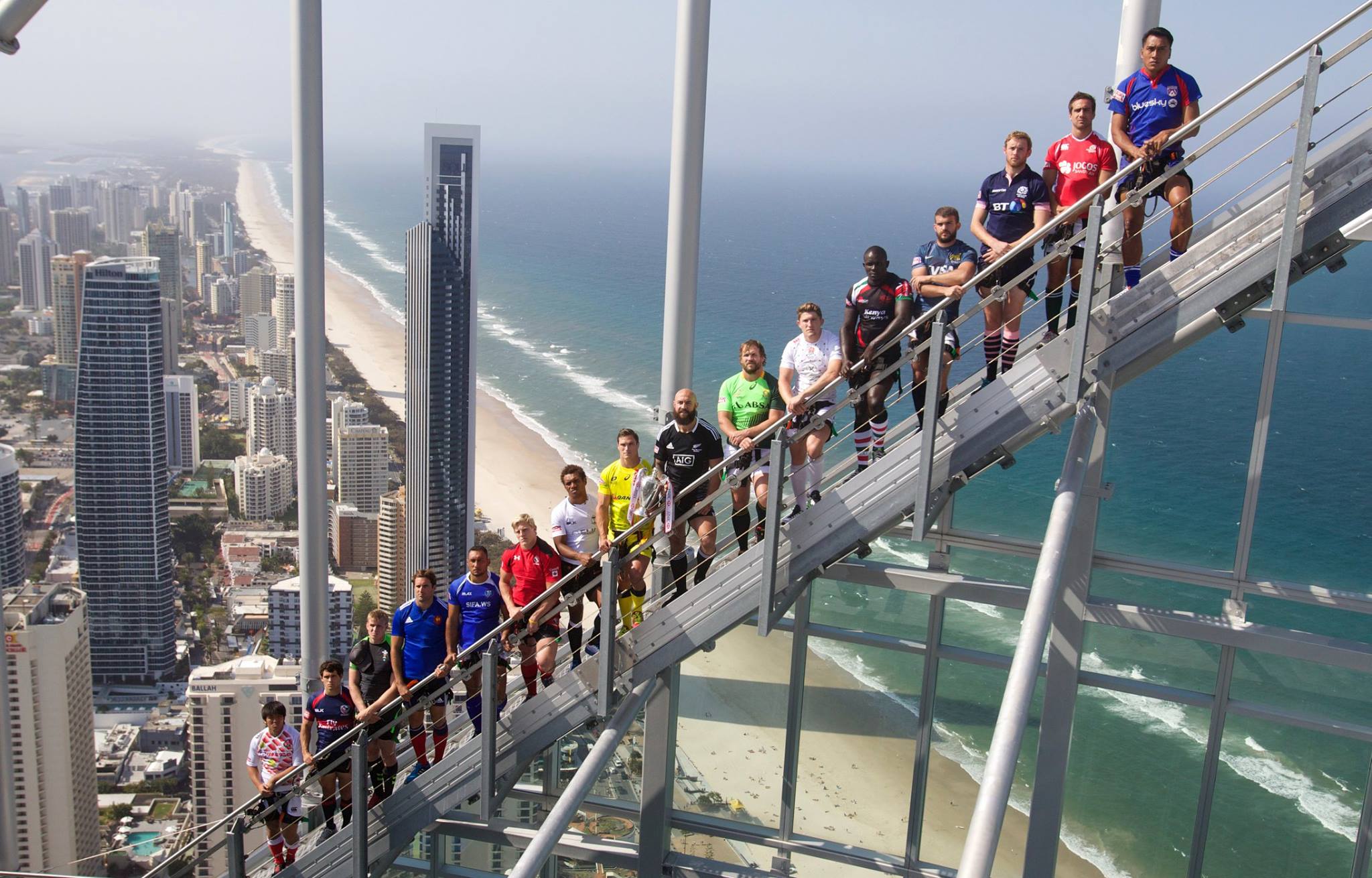 Australia’s Day One campaign at the Gold Coast Sevens 2014 yielded some good results against Portugal and Scotland, but let in four first half tries against the form team of the competition in Fiji. Finishing second in Pool C, Australia secured a tough matchup against South Africa.

With New Zealand obliterating Wales in the Plate semi-final, Australia knew that progression would see them play one of the toughest matches of the tournament as New Zealand hit their straps. After leading by 12 with a  minute to go Australia shut up shop, allowing Argentina to score two tries to come back from nowhere to humiliate the home side, knocking them out of the Gold Coast Sevens 2014.

Australia got off to a great attacking start, with Sam Myers going going close to cracking the edge of the defence, but the Argentines held firm.

Argentina hit back and scored first points though after some effective attack had the Australians desperately clinging on. Joaquin Diaz Bonilla was the man who finished for the Argentines, running through two missed tackles. Though Australia looked promising in attack, showcasing some good attacking structure, discipline and handling errors stopped Australia from building pressure. With speedsters Shannon Walker and Greg Jeloudev both nursing injuries, Australia just didn’t have the pace in this squad to throw the ball around like the Fijians or the Samoans – as such, the need to build sustained pressure was paramount.

With a minute to go in the first Australia’s effectiveness in tight was rewarded with an overlap on the right wing. Cam Clark received the ball in space for an unconverted try, but Australia weren’t finished yet. As the halftime hooter sounded, Argentina were penalised in front of the sticks, with young Lewis Holland seizing the initiative and bursting through a retreating line to sneak the lead for the home side.

In the second half Argentina went close again on the left touchline after nearly regathering a grubbering ball that eventually rolled dead. From the following scrum, James Stannard made a break down the right touchline, drawing and passing superbly for Ed Jenkins to score an unconverted try. With a 12 point lead, I had written the following in my notes:

“Both sides were being penalised frequently in a worrying sign for Australia, as their poor discipline is likely to cost them even more against New Zealand.”

I think that goes to show just how finished the game seemed. Australia made 5 substitutions following their try, possibly resting their main squad for an epic encounter later this afternoon. An Argentina overlap on the left wing nearly cost Australia 5 points, but a heroic chase from captain Ed Jenkins bundled the runner in to touch.

With 15 seconds to go Argentina scored through Axel Muller, rushing the conversion to my amusement. Pfft! As if they had a chance!

Next time I looked up Argentina had been awarded a penalty 5 metres out from the Australian line, and were sweeping the ball left. To the shock and horror of every Australian rugby fan here (admittedly a minority), there was an overlap!

Axel Muller had the ball in acres of space and crossed the line, knocking Australia out of the Gold Coast 7s without a Bledisloe teaser. First Mendoza, then the Gold Coast. Well done Argentina, you killjoys.

They take on New Zealand at 4:47 pm local time. Make sure you tune in to http://www.irb.com/live/video.html or FoxSports for the final between two of the greatest entertainers in the competition, Fiji vs Samoa at 5:49 pm local time.

Thanks for following Green and Gold Rugby’s coverage of the the Gold Coast Sevens 2014. It’s been a pleasure

The Australian’s began the match with a 5 metre scrum, and opted to clear it – Australia’s third kick from hand of the tournament. Cecil Afrika cleans it up, and attempts to put it back in the Aussie half. A charge down smothers the opputinty, but Afrika regathers and is tackled in to touch.

Australia attack wide but there are no biccies. They swing it back to the right before again pressing an overlap on the left. A good pass was needed but Pama Fou couldn’t execute under pressure. Australia were playing under advantage though, and play was brought back to centrefield. Jesse Parahi nearly took the lead for Australia after a strong carry from the set piece move, but couldn’t crack the line. That honour went to Chucky Stannard on a trademark dart from the base of the ruck, shooting through wide of the posts. Cam Clark couldn’t convert, but Australia looked confident after a good start.

With the lineout set on the right touchline, Australia swung the ball left searching for Pama Fou. A strong line back in to traffic nearly broke the line, and South Africa were penalised in the breakdown attempting to slow down play. Australia kicked ahead for a lineout deep in South Africa’s 22, and trucked the ball up through the middle. The Blitzbokke shut down the runner with ease, and pounced on the ball before any support could arrive. Australia were penalised and the Africans kicked themselves inside the Aussie half. A string of breakdown penalties gifted the attacking side easy field position, and the cracks in the Australian defence started to show. An attack on the right wing was well defended by the Aussies, and several phases of goal line defence kept South Africa at bay for a while. Another penalty was quickly tapped, and South African Kwagga Smith charged through the guts for the equaliser. A successful kick left Australia staring at a halftime deficit of 7-5.

Second half (courtesy of Hugh Jarse)

SAF PK for not releasing ball.

Another PK to SAF. Quick tap.

3 minutes. Frankie Horne Meat in the corner. Conversion will be tough and is wide.

AUS win kick off. Cusack fumbles ball . Knock on. Myers on for Cusack.

1 min left. Holland on for Fou.

SAF have this game easily.

Kick misses after shocker of DK.

What was the difference between the two teams?

Kicking accuracy? if that one had gone a bit straighter you could have got the win as well…

It’s all well and good to say you win games with kicks but it’s those little things like that at the end, we dropped a few pills, given away penalties, I think that was the main thing.

How do you recover for the rest of the day now? you’re at two losses in a row but with quick matches anything can turn

Yeah we’ll just to do the same as if we were going in to the cup mate, like every game matters man.. So we want to get away with a win against the Argies and move on from there.

Were you surprised with the South Africans?

Well they’re a quality side, I mean they won the Gold Medal at the bloody Commonwealth Games. They looked pretty sharp yesterday but as I said before there’s the penalties at the ruck, some dropped balls, which just cost us at the end.

Still, what a finish. Could you consider the Tournament a success?

Yeah it’s hard to say after a loss, I think it’s what we do from here that matters, like you can’t come away without getting at least that Plate (5th place)

How different a challenge is it to play South Africa than it is to play Fiji?

They’re both quite different teams, South Africa are quite a bit more structured, Fiji just throw the ball around, so you’ve got to approach them both totally differently.

Were you disappointed with the crowds, and would it have made a difference if you had better support?

As a Super Rugby veteran, how important is that experience in the make up of the 7s team?

I guess any kind of experience is important, all the top sides have got them, New Zealand have DJ Forbes so yeah I think it’s important, but a lot of these young guys have a couple of seasons experience under their belt, so we do have a fair bit of 7s experience.

Jeez, you can’t go past Fiji after last night, putting all those points on us, but Sevens is a funny game and anything can happen. You look at England today (beating New Zealand comfortably), I mean you can have a red hot day yesterday but it doesn’t mean much today.

Australia will play Argentina in little over an hour, at 2:31 pm local time. If Australia win, they will face either New Zealand or Wales in the Plate Final.