Monday’s Rugby News basically does an around the grounds.  There was bulk rugger on over the weekend, so come with now on a journey through time and space. 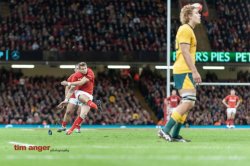 What? What am I looking at? I don’t see nothin’.

It’s been a long time coming.

For the previous 3,634 days Wales had not been able to match their heroics from the corresponding fixture in 2008 when Stephen Jones’ boot proved the difference as the host held on to win 21-18 in front of 75,000 fans at Millenium Stadium.

I won’t go into the specifics here, our man on the ground Dylan has done that for you already.

In a more general look at the match, not only does it lift the seeming curse on Wales but it has heaped yet more pressure on beleaguered Wallaby coach Michael Cheika.

Rugby Australia had set lofty goals at the beginning of the tour, namely, victories in all three tests (against NH teams) was to be considered a “pass” mark.  Quite how Castle and cronies will respond now is to be seen and an almost unconsidered loss to Italy could see real changes take place….at least, one would hope.

One question that still lingers over the squad is one of leadership.  Michael Hooper’s captaincy and in particular, his on-field decision making again drew ire from the armchair and non-armchair critics alike.  In a match for the purists repeated kickable penalties were turned down with the option of kicking for touch taken instead, a decision Hooper has now conceded was wrong.

With a week to recoup before taking on the Azzuri fresh off their thumping of Georgia things are in the balance for the Wallabies.

“If I had my time again, I would’ve gone for the shot”

There was many a nod to the service men and women before the games.

Wales weren’t the only home nation hosting this weekend as international matches took place all across the UK and Europe.

The big dawg of the weekend’s clashes was no doubt the Poms who rolled out the welcome matt to the Kiwis.  The friendly reception quickly wore off as they then jumped out to a 15-0 lead only to have the Darkness claw their way back into the match and hang on for 16-15 victory.
Like any match involving Un Zud, there was a healthy dose of controversy as the TMO intervened late in the match to disallow a try for the home side.

Up the road in Murrayfield Scotland absolutely ran riot against Fiji.  Recovering from 17-14 down the Scots blew their opponents off the park racking up a half century in the process.  The final score was 54-17.

Across the other ditch, Los Pumas took on the might of current world No 2 Ireland and again it was home side coming from behind to record the big W.  Ireland scored 3 tries to 1 on their way to a 28-17 win.

The worst of the best took on the best of the rest when Italy faced Georgia in Florence.  With the Lelos looking to give it a red hot go against a tier 1 nation a boil-over was definitely on the cards.  In a cruel blow for Georgia’s hopes (or vindication of Italy’s inclusion in the 6 Nations) the Blue guys won the game 28-17.

The last clash between two top nations saw France and South Africa trade blows for 85 minutes with a try to SA hooker Bongi Mbonambi sealing the game for the visitors, 29-26. 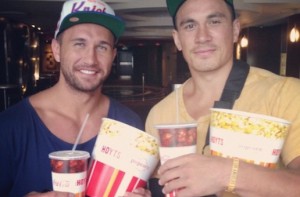 SBW might need to dig that sling out again.

In the closest thing rugby has to the Thriller in Manilla, anticipation is building in the lead up to Ireland playing host to New Zealand this weekend.

The Slog in the Bog perhaps?

Having never previously knocked off the MIB, Ireland finally cracked the code in Chicago 2 years ago and held bragging rights over their mates from d’under for a whole two weeks until the Kiwis won the next and until this weekend, last match between the two proud rugby countries.

The lead up has in many ways been good for both sides.

New Zealand was made to work hard to secure the millionth Rugby Championship even dropping a match to South Africa in the process.  They’ve warmed into the Autumn internationals by just scraping past England last week.
Similarly, Ireland swept all and sundry en route their 14th Six Nations title and brushed aside an at-times unpredictable and always dangerous Argentina.

The ABs might be going in without one of their backline weapons after Sonny Bill Williams picked up an injury late in the first half against the Poms.

“He’s got a grade one AC shoulder. He may be [out] for a week, maybe two,” All Black coach Steve Hansen said.

On the other side, Ireland will definitely be without back rower Sean O’Brien after the injury magnet has managed to this time attract himself a broken arm…..that requires surgery.  Irish coach Joe Schmidt didn’t sugar-coat anything in saying, “Sean has broken his right arm so he obviously won’t be available for the rest of the Guinness Series (Ireland’s inbound tests).

“He’s gutted. I am gutted for him. I think the team are. I actually thought he was just getting into the rhythm of the game.”

What effect the losses have on the sides in the game is yet to be seen but even without them it’s sure to be a blockbuster. 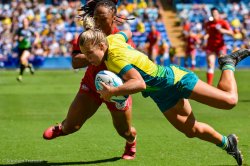 The Women beat all comers to claim the 2018 Oceania title.

Swapping from the 15-a-side game to the 7-a-side variant there was still plenty of play over the weekend.

Specifically, for us here in the land of Oz, our charges donned the national kit and took on the best the Pacific region had to offer in the Oceania 7s.

With both reigning Olympic and World Championship in men’s and women’s draws hailing from the region competition was always going to be difficult.

In the men’s draw it was 2016 Rio Olympic champions Fiji again proving their credentials as the took home the gold 17-12 over New Zealand.

The Samoans held on for an upset win over the Aussies for 3rd
Tonga beat the Cook Islands for 5th
And in the battle of the “News”, it was Papua Guinea taking out 7th at the expense of Caledonia.

On the women’s side of the competition it was our local lassies getting one up over our mates from across the way with a 14-10 win in the final.

Importantly the team gives us something to brag about, not just for the tournament but by giving us a rare win over the Cuz Es.
Fiji showed their strength across the weekend by finishing 3rd ahead of PNG.
Samoa were too good for the Cook Islands in the 5th place play-off.
And in case a Tony Abbott visit wasn’t enough, New Caledonia ensured Nauru ended the competition without a single win relegating them to 8th and last place.

Wales v Australia 2018
Will Cheika do a Postecoglou?