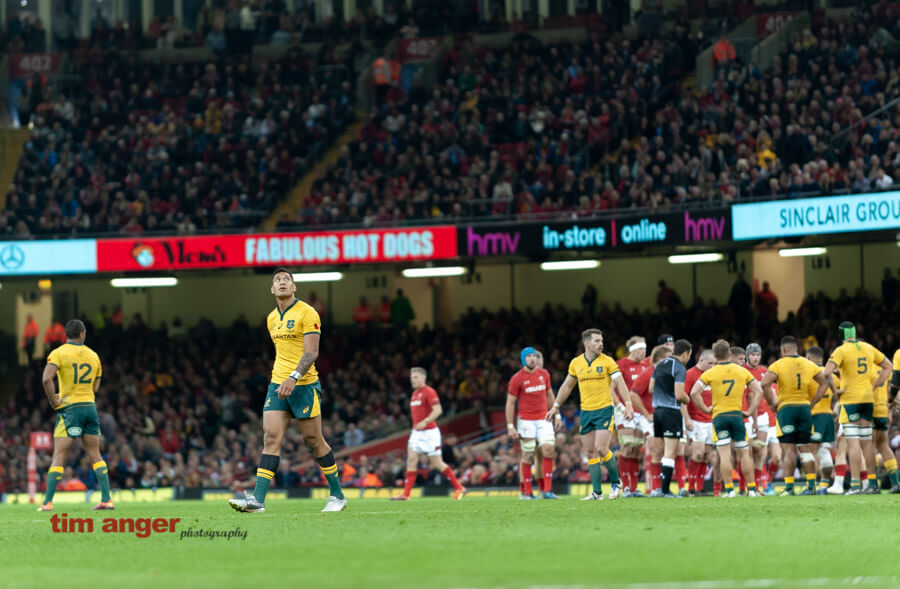 It’s been 10 years and 13 matches since the Wallabies last tasted defeat at the hands of the Welsh. Wales are coming off a strong win against Scotland but as former captain Sam Warburton said, the Wallabies are the team to beat this tour. A win for either team would make a strong statement a head of their pool match in a year’s time at the World Cup.

2018 will go down as the year of broken records. The Irish got their first win in nearly 40 years on Australian soil, Los Puma’s won in Australia for the first time since 1983, and now the Welsh broke their 10-year drought against the Wallabies.

This Wallabies performance could almost be interchangeable with any match in 2018.

Despite some strong attacking moments, any sign of promise often resulted through in the Wallabies unravelling, kicking away possession, knocking the ball on or being caught at the breakdown by a more dominate Welsh defence.

The Wallabies came out guns blazing in the opening minutes, rucking it hard and spinning the ball through the hands. The Welsh held strong, Justin Tipuric forcing turnovers close to the try line.

Both sides had their fun playing aerial ping pong, trying some high bombs and cross kicks to no results.

The first points came through Leigh Halfpenny after Australia was pinned for a second scrum penalty. Once again the set piece of the Wallabies in the first half of a match lets them down, turning over lineouts and giving away penalties at scrum time. This is the theme of 2018.

Bernard Foley got Australia on the board in the 33rdminute of the match, after an offside penalty from Wales, bringing the scores the 3-3.

Just like it did for the Wallabies did in Salta, the half time break proved beneficial to the Dragons, as they came out all cylinders firing. Despite some fancy footwork from the likes of Halfpenny, the Wallabies defence held strong.

Hooper made the decision to kick for the corner rather than kick for points on two occasions, one being very kickable for Foley or Beale. Both times the Wallabies coughed the ball up, once being an over throw.

Once Michael Cheika had interjected his replacement front row, thing began to look up for the Wallabies, with the Togan Thor Taniela Topou making a statement at scrum time, and in his ball carrying. But just like the effects of Red Bull, the pick-me-up was short lived.

Unlike Hooper, when the Welsh had a chance for 3, Alun Wyn Jones pointed to the post and Halfpenny did his team proud lifting the scores to 6-3.

The clock clicked down and the Welsh crowd began to sniff victory, thinking they were on for a try before the Wallabies cleaned up the scramble.

An out-wide penalty from Matt Toomua drew the scores level with moments to go, offering the dreaded draw. It was not meant to be though as Dan Biggar and his dance, kick the winning penalty.

The match could have gone either way, the score could have blown out had Halfpenny been more accurate earlier on, or had the Wallabies elected to kick for points rather than kick to the corner, where they would turn the ball over.

Sam Warburton talked about how important this match was for the Welsh, that winning this would give them the morale boost the need a head of the RWC next year. Now they have it and Cheika’s 3-0 pass mark standards now sit at 0-1. The Wallabies also sit at 3-8 for the 2018 season.

Italy and England to come.

The Game Changer
Hooper not electing to kick for point proved once again to be the downfall. It may not have gotten the Wallabies the win but they would have had the lead early in the second that could have been the lift they need.
The G&GR MOTM
It really was a strong team effort with standout performances from many of the Welshman including Moriarty, Davies and the Back 3, but with his two early crucial penalties and all round strong performance that pushed Justin Tipuric to be the G&GR Man of the Match.
Wallaby watch
Samu Kerevi played like there is a plethora of talent pushing for the 13 jersey, he ran hard, carried and passed well and even chased the ball. DHP played a decent game too trying his best to find space and run straight.