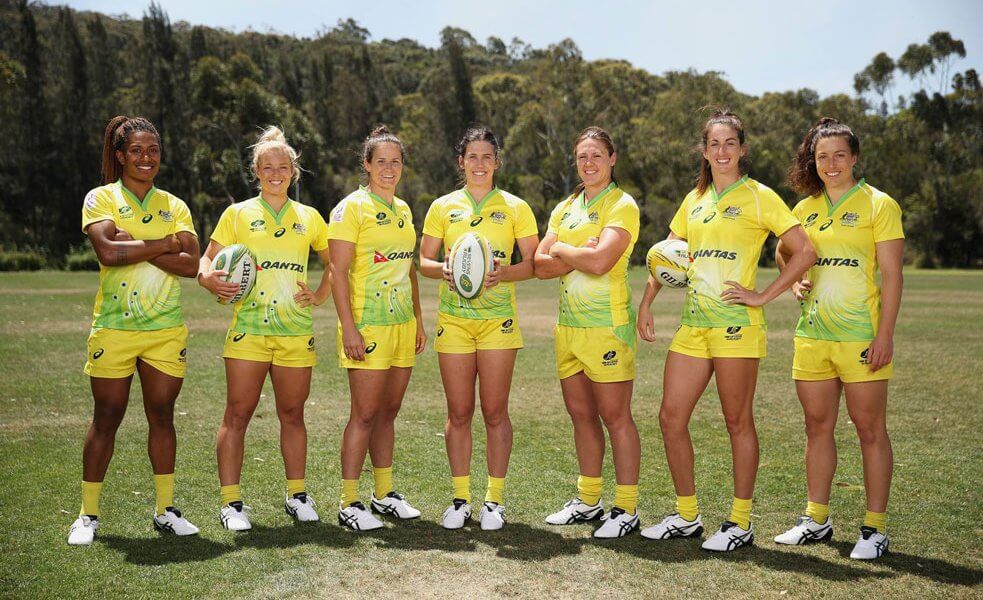 Welcome, G&GRs, to a slightly delayed Monday News. I thought it best to wait for the results of the Commonwealth Games Sevens matches before posting. Another quietish weekend on the international scene prior to the coming fortnight of TRC action. Domestically, a lot of competitions are heading towards their finals series.

The Commonwealth Games Sevens have finished with the Australian women’s team taking away the gold, and the men’s side finishing fourth after their loss in the bronze medal match to the Kiwis. The gold in the men’s went to the Bokke after their demolition of the Fijians in the gold medal match.

I tell you what, these players are all athletes. Not only is there the requirement to be physically strong, but the mental aspect of the game, particularly in a high-intensity cardio game where the one decision can mean a win or a loss. I appreciate that sevens is a bit like T20 cricket – you love it or you hate it. The reality is that, while it’s “rugby”, it’s an entirely different game to XVs. Every now and then it’s good to watch. But give me “real rugby” every day of the week!

While the games were of high quality, the 7+ coverage was poor for me. I particularly hated the ad breaks in the middle of the matches when watching on replay. Still, I suppose it’s better than Fux and better than no coverage at all!

The women’s article is here.

The men’s article is here.

Well, I think this is as disappointing as the alleged NRL spending spree. While I have no doubt that he’s a talented player, his disciplinary record is longer than Hoss’s! Latu’s last act on the field for Stade Francais saw him (deservedly) whacked with an 11 week suspension after a red card in the Heineken Champions Cup for his horror mid-air “tackle”, and was accused of having a drinking problem by his club owner, continuing his long running issues with ill-discipline. Previously, he was red carded and suspended for abusing referee Wayne Barnes. Sure, he’s come back on a deal that is significantly less than his salary at Stade Francais (apparently less than 100k), but is he really worth the risk? Off-field he has proven to be a liability; on-field he is a downright disaster. While there is a part of me that hopes he can get his shit together like, say, James Slipper and James O’Connor, the onus is absolutely on Latu to prove he isn’t the complete handicap he has been in his career. Good luck to DC and the Tarts on Latu’s rehabilitation… you’re gonna need it!

The Sunday Times in the UK has released a harrowing article about the late Siobhan Cattigan, a former Scottish international player. While the article is paywalled at present, the gist is certainly there to see. The line “They fixed her broken bones but turned their backs on Siobhan’s broken brain,” her father, Neil, added” is gut-wrenching.

Further, Bernard Jackman has announced that he believes he suffered around 25 concussion events in his final season as a professional rugby player. His accounts of his time are similarly terrible, though he admits that he wasn’t able to be responsible for his own health at times due to the stigma of head knocks at the time.

“In my last season as a player, my susceptibility to concussion increased massively,” he wrote. “The previous season I had noticed that it was taking less contact to give me a blinding migraine or dizziness but it wasn’t something I ever considered would make me miss a match or even a training session. Back then, there was still a bit of an old-school attitude in the dressing room to concussion and it was rarely seen as a serious injury among us players.

“Unfortunately, during my last season, my ability to play or sometimes train without concussion-like sensations was next to non-existent. Even warming up and hitting a tackle bag was often giving me a blinding headache – or I would temporarily lose my balance, or have a seeing-the-stars-like feeling.

“My tolerance for contact was so low that it felt as though I could have been concussed in a pillow fight. I think I got around 25 concussions in that last season. The vast majority of these I kept to myself and didn’t declare to our team doctor, which was naive and stupid of me. With hindsight, I was lucky I lost my place as the first-choice hooker and I went from having started 19 matches the previous two seasons to just eight in my last.

COMING UP TO FINALS

Rightio, folks. In lubland, we are hitting the business end of the season. I’d like to take this opportunity to remind the fine readers of G&GR (and others who somehow make it to this point…) that the people with the whistles are human. They will make mistakes. They are not there to ruin the game. Often, the referees who have the privilege of refereeing (or assisting in) the finals have earned the right to do so through consistent performances during the season.

Now, I’m going to share extracts of memos sent to all rugby clubs and affiliates by RA’s Integrity Unit. Some of you may have seen this; for others, this may well be confronting about what is happening on the refereeing side of rugby. I myself have been on the receiving end of a player calling me some words that only Hoss is allowed to call me, as well as having a ball thrown at my head by the same player (yes, he was vinoed). Unfortunately, I am not alone in being on the receiving end of words from “passionate players” and poor comments from sideline “fans”. There is a HUGE difference between banter and being abusive. I urge you to not cross the line.

I would encourage all G&GR readers to think about how we all contribute to our local game. While we do not stoop to the vitriol of various social media pages, the ‘other site’, or to the level of a certain Bokke water-boy coach, I ask that we all support, encourage and engage positively with the referees in clubland as we would with players from our own clubs. While we have no game without players; we don’t have the match without referees.

As you will be aware, every season presents its challenges in relation to the range of on and
off-field foul play and misconduct matters that our hardworking Judicial Committees, Code of
Conduct Committees and Appeal Committees across the country are required to deal with.
However, despite previous communications to the Game, there is one constant issue that
continues to occupy our disciplinary administrators and committee members and that is the
issue of inappropriate behaviour towards our Match-Officials, many of whom give up inordinate
amounts of time to voluntarily turn out weekend upon weekend and ensure that all of our
matches across the country can go ahead.
The behaviours experienced this season towards Match Officials include, on one end of the
scale, dissent, chat-back, abuse, disrespect and allegations of being a cheat right through to
threats, assault and serious violence. One player is currently before the criminal courts for
punching and kicking a referee a number of times while on the pitch during a match. It goes
without saying that all of these types of behaviours are utterly unacceptable and a scourge on
the game. It remains the case that we all need to do better to ensure that these types of
behaviour are properly dealt with under the Disciplinary Rules and Code of Conduct1 and that
robust sanctions are imposed to ensure, not only that the offending person is appropriately
sanctioned for their conduct, but also that the sanctions imposed act as a significant deterrent
to others in the game.

There can be no hiding from the fact that rugby continues to have issues, year-on-year, with
regards to on and off-field Match Official abuse and for us all, as a collective, to accept that
unless we get better at dealing with these issues then they will continue to exist and threaten
the very fabric and core values of our sport.

We need to recognise that there can be no matches without our Match Officials, and they need
to be better protected. This means that all cases of Match Official abuse must be treated
seriously and, where conduct is proved, robust sanctions imposed on Participants in an effort
to drive this conduct out of rugby and make Match Officiating a really enjoyable role. That way
rugby will be able to retain and recruit talented individuals to act as Match Officials in the future.
I strongly urge all Rugby Bodies to discuss the contents of this letter and to send out a clear and
strong message to all of their Participants that positive on-field and sideline behaviour,
particularly towards Match Officials, must be demonstrated at all of our matches and events, no
matter the level. To support this approach, all Rugby Bodies are asked to consider the need, within their own competitions and jurisdictions, to issue a directive to put all their Participants and Clubs on
notice that in order to seek a change in behaviour and eradicate Match Official abuse that
increased sanctions are going to be imposed going forwards under the Disciplinary Rules and
Code of Conduct. Additionally, all Rugby Bodies are requested to review their match-day processes and
procedures and ensure that they are fit for purpose when it comes to putting appropriate
measures in place (e.g., the appointment of suitable experienced Ground Marshalls, roping off
pitches, no alcohol pitch-side etc.). in order to seek to mitigate the risks of Match Official abuse
by coaching staff and spectators etc.

Here’s to an excellent remaining few weeks of clubland rugby and TRC!