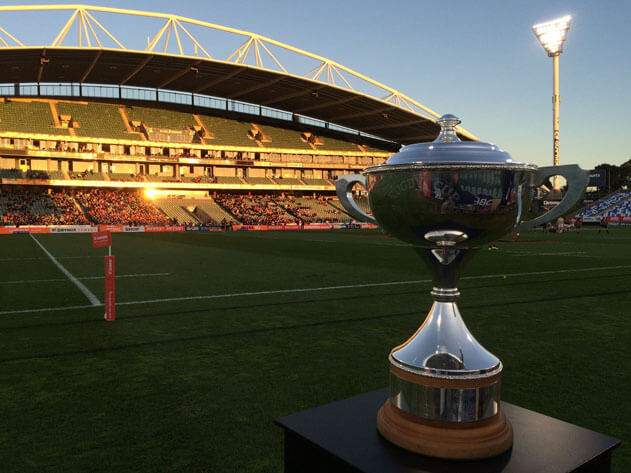 MITRE 10 CUP PREMIERSHIP FINAL AT AMI STADIUM CHRISTCHURCH
CANTERBURY 43-27 TASMAN
It was an all Crusaders clash as Canterbury and Tasman battled it out for provincial rugby supremacy in Christchurch on Saturday night. Both teams lost just two games in the regular season and it was Canterbury who took the honours when the teams met in round two. Head-to-head the two teams have played 12 times since 2007 when the Tasman union was amalgamated from Nelson and Marlborough, Canterbury winning eight to Tasman’s four. Canterbury made three changes to their lineup from the semi-final bringing in Prop Daniel Lienert-Brown and David McDuling with Rob Thompson returning to the midfield after a knee in injury. Tasman made four changes adding flanker Shannon Frizell, hooker Andrew Makalio, lock Quentin Strange and promoting live wire midfielder Alex Nankivell.

Canterbury: Pretty happy about their win

The Action
The game was all out attack from start to finish. Canterbury shocked the travelling Tasman supporters with two quick tries inside the first 8min: the first to lock McDuling (4) who charged a Marty Banks clearing kick, and the second to English winger Nathan Earl (14) who pounced on a grubber kick from Ritchie Moanga (10). Canterbury were able to retain possession for long periods but not able to make headway through a bruising Tasman defence. Getting their chance on attack Tasman charged well through the forwards and a first salvo was stopped when hooker Makalio was denied by the TMO. Forced to earn points though the trusty boot of Marty Banks (10), Tasman survived on scant possession but attacked hard with the ball and a rare counter-ruck on the half way turned into a try when Tasman players booted the loose ball down to the Canterbury line and drove over the ball to score for a 13-12 lead. The lead was short-lived however and possession and territory slowly wore down the Tasman defence along with the big ball running Canterbury forwards Sanders (7) and Bird (5) who made metres down the middle. A brilliant solo try to five eighth Ritchie Mo’unga (10) after he cut through the line from 30m out proved a just reward before the break.

Tasman started a man down in second with Ainsley (4) in the bin for foul play. Canterbury continued to have most of the ball and with an extra man and the ability to patiently move down the field it wasn’ty long before the Red-and-Blacks were camped on the Tasman line where midfielder Rob Thompson (12) crashed over two out after a series of pick and goes. The game threatened to open up but never did. Canterbury tried throwing the ball wider which just produced more turnovers which contributed to Tasman scoring twice more. First when before halfback Billy Guyton ran in off a ruck after a patient and brutal 26-phase forward effort that went lateral and inched forward with runs from forwards Samu (8) and Makalio (8). The second from hooker Jesse MacDonald (16) near the line closed the gap to 36-27 inside the final quarter and the contest was back on. Canterbury took back control however and when Mo’unga held up a pass to put flanker Harmon (20) over with 10min on the clock game was all but won at 43-27. A great game. Tasman made a valiant effort with some excellent attack and defence from both teams but the excellence and talent of Canterbury shone through.

Man of the Match Ritchie Mo’unga: We will be seeing a lot more of him next year in Super Rugby.

MOTM: Crusaders pivot Ritchie Mo’unga had a commanding game. He kicked well in play, directed his backs and forwards confidently around the field on attack and scored two tries while having a hand in two others.