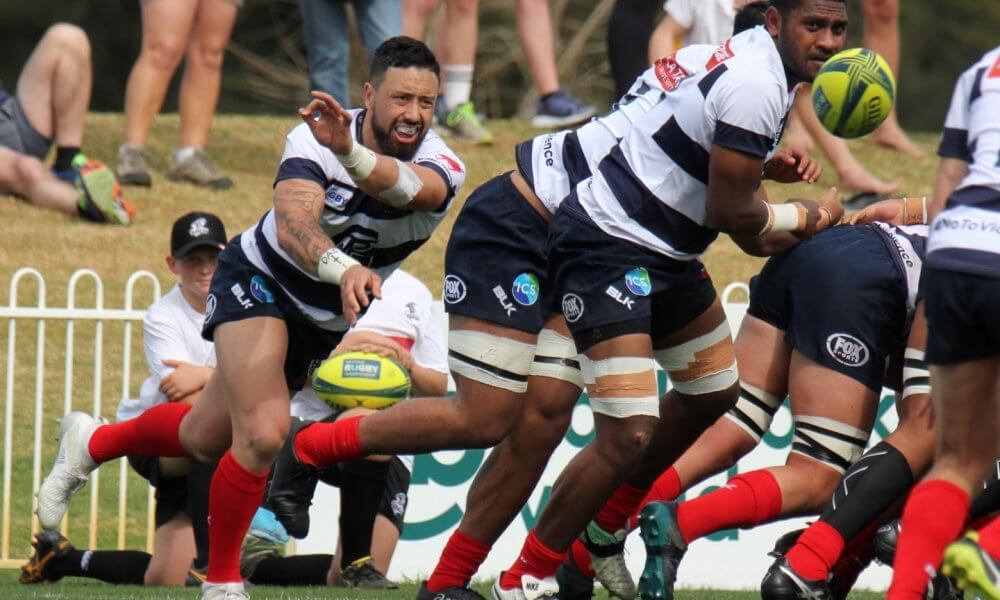 It’s a warm but windy day at St Patrick’s College in Ballarat, today’s venue for the match between the Melbourne Rising and the Sydney Rays. With both teams out of contention for a finals place they should be looking to finish the season on a high with a win in this the final round of the 2018 National Rugby Championship.

The struggling Sydney side have been bolstered with the inclusion of Wallabies Nick Phipps and Rob Symmons. The Rising are missing a couple of key players through injury.

The first half was a tight contest with momentum switching from one team to the other. The Rising forwards showed a clear dominance over their lighter, more mobile counterparts – particularly at scrum time where they were able to produce a number of penalties. Unfortunately for the Rising they were unable to translate their forward dominance into scoreboard pressure.

After an initial break from new Waratahs’ recruit, John Folau, Will Harrison opened the scoring for the Rays with a try and conversion at the twenty minute mark.

Following a scrum penalty the Rising forwards ran through several phases near the Rays’ goal line before Angus Cottrell broke through the defensive line to touch down after 29 minutes. Archie King’s conversion leveled the score at fourteen all.

Just before half time, John Folau made a powerful run down the right wing to score another five points for the Rays. Will Harrison’s conversion gave the Rays a 21-14 half time lead.

The second half was all one way traffic with the Rising dominating field position and possession to run in eight trys to one.

Just two minutes into the second half the Rising levelled the score at 14-14. A big break through the mid field from Sefa Naiavalu set up Angus Cottrell for his second try and Archie King made no mistake with his conversion.

Other highlights of the half included a length of the field, team try to the Rising. Sefa Naiavalu elected to play the ball instead of letting it go dead. He off loaded to Isi Naisarani who carried deep into the Ray’s half. Eventually the ball ended up with Angelo Leaupepe to score his first of the game.

Richard Hardwick scored an impressive solo try down the right wing, bumping off tacklers and sitting down Tyson Davis with a strong “Don’t Argue”.

Nick Phipps caught the Rising defence napping with a quick tap and pass to Will Harrison. Harrison found reserve winger Latu Latunipulu who made no mistake, scoring in the left corner.

With only two wins for the season the Melbourne Rising must be very disappointed with their overall performance. Despite the fact that they have been competitive in most games, it’s hard to argue that they haven’t under-performed.

I’m sure that the players, coaches, and people behind the Sydney Rays have put in their best effort every week but they simply aren’t up to the required standard. It seems like the NSW teams are being deliberately under resourced. Whoever in NSW Rugby is responsible needs to, as they say, either piss or get off the pot!

Seven minutes into the second half, the Rising secured a scrum penalty and elected to scrum again.

For the visitors, Jack Dempsey didn’t get many opportunities to show off his ball carrying skills but was rock solid throughout and the best of the Rays. Nick Phipps also played well and kept himself involved.

Richard Hardwick was a constant pest at the breakdown and showed some strong ball carrying skills. New Wallaby squad member, Angus Cottrell bagged a brace and did nothing to harm his chances of a spot on the end of year tour.

For a dominant display on both sides of the ball and his involvement in just about every big play, Isi Naisarani is the G&GR Man of the Match.

John Folau showed some pace and strength on the left wing. Will Harrison and JP Sauni both had good first halves but few opportunities in the second.

Two of the biggest highlights of the second half were huge line breaks from the Rising’s reserve hooker and former Samoan Under 20s player, Iafeta Luamanu. Keep an eye on this guy!