The expected rain was delivered earlier in the morning, leaving the match window with blue skies ready for a game of rugby and with top of the table and the Horan-Little shield on the offer there was plenty to play for, and what a game it turned out to be.

The undercard was full with rugby clinics for the little ones, curtain raisers of junior teams and Golden Oldies teams, the food trucks in full preparation and beanbags on Phil, the Hill as part of the seating arrangement (think outdoor cinema style).

With 15mins before the kick off the crowd swelled and a solid 4500 people came to enjoy the game.

Superb game of Rugby Union showing that if you give the Fijians an inch, they will offload in that inch and grab plenty of run meters.

The Western Force spending most of the match pushing and driving, applying pressure.

The Drua with incredible line breaks and ball movement for long range meters.

Fiji kicked off and the Force took control swinging the ball across the field, multiple phases and making meters owning the territory and possession. This quickly led to a try to Rod Davies from a bullet pass from Deegan (worth watching the high lite clip to see it) converted by Ian Prior from the side line.

The pattern was repeated from the kick off and the Force spent most of the next 10 mins pressuring the Drua with handy field position. A kick to the corner give the Force a good attacking position, the ball got spread across the face of the try line. From the breakdown the Force attack bringing the ball back to the centre of the field. A sharp pass from Ian Prior hits Rodney Iona, who stretches for the line adjacent the post. Prior again with the conversion and its 14-0.

Force looking good and in control of the match, not afraid to put the ball long and use pressure to gain the upper hand. Fiji having to do plenty of defending early in the match.

It wasn’t until around the 15min mark that the Fijians got the ball in hand with a bit of go forward and suddenly the home crowd realized what the Drua could do with the ball, with a wrapping line and sweeping path the Fijians were away, with multiple touches and excellent support running from Alivereti Veitokani, almost resulting in a try if not for a desperate arm chopping tackle from Andrew Deegan to force a knock on from Aporosa Tabulawaki, the 14 wing.

Plenty of rugby being play and the first quarter of the game being very intense with huge midfield contact from both sides. The Western Force scrum once again showed what a massive weapon it is, dominating every set piece driving through the Drua scrum drawing penalty after penalty during the game.

Fiji starting to flick the ball around now and find the smallest of gaps to put a support runner into space. A small forward pass denied Veitokani a try after he had hit a line at scything pace leaving all defenders flat footed.

Once again the Force apply pressure making the Drua defend for a good 5mins on their line, and then within seconds the Drua are at the other end of the field. Good bit of interplay and the Force are now made to grind their way out of their 22m.

The Force Scrum again! Man, it’s good. The Force backline then display one of the best first phase moves seen in a long time – poetry – only for the ball to be dropped with the try line within reach by a sprinting Jack McGregor.

With 10mins left in the half you could see both sets of forwards signaling within their groups to slow things down a bit, which was understandable with the game pace being set at hectic.

The Fijians found themselves back defending their line, affecting a turnover and securing the ball. Frank Lomani off the back of the break and a huge step finding a gap, getting some go forward, finding Alivereti in support he passed through and set Alivereti off on a run who with a perfect draw and pass, set 14 Aporosa Tabulawaki off on a 60m sprint for the line. Very slick. Successful conversion. 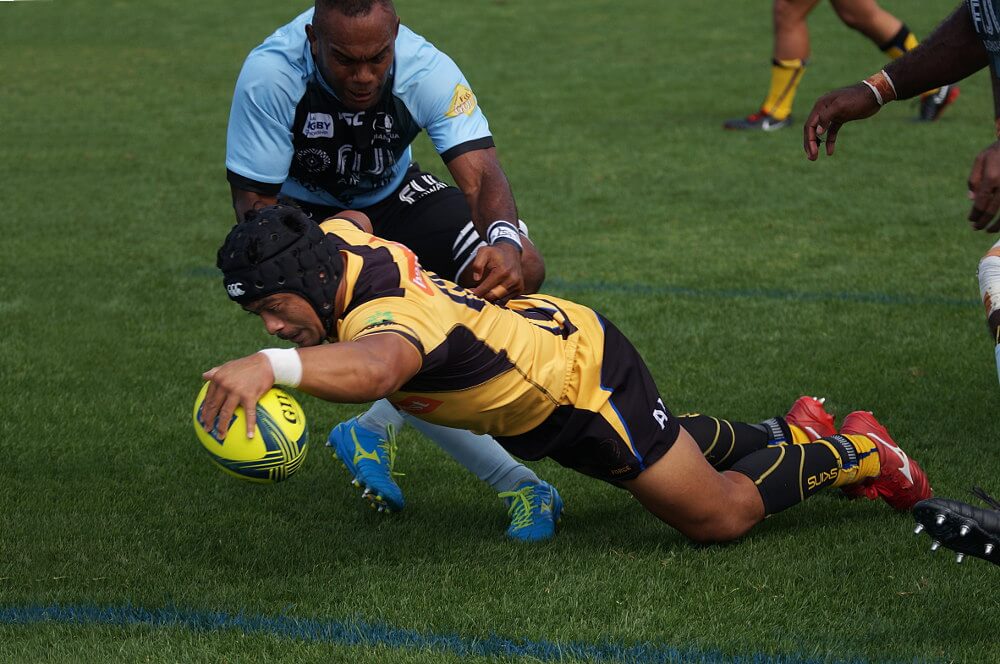 Force start the 2nd half and the Drua drive out with good phases and “blink and you’ll miss it” offloads push to the Force line and are held up. Drua 5m scrum, but the Force nullify it. Game gets back to running phases with the Fijian Locks getting hard earned yardage through continual contact running at the Force defensive line, and the Drua are back to within 5m of the Force’s try line with the ball moving to Alivereti, who ball in hand, bends time again and shows everyone the ball, stops, steps through a gap and pops the ball to Levani Kurumudu to score which once converted levels the score with 30mins left.

Fiji seem to have got a sniff and are attacking everything, they are also drawing plenty of penalties which in todays rugby had many asking many more whistles before a card was shown. Luckily for Fiji this didn’t happen, but the frustration was showing on the Force players.

Things then got very loose – suiting Fiji – with a double tap, double intercept falling into the hands the Drua’s full back Enele Malele who ran away to score, and Fiji looking good.

Another scrum and a smooth through the hands from the Force and Rocket found the hint of space he needed and disappeared with the home crowd loving seeing him at full pace, burning the crossing defense on the outside to score and win the 70m sprint.

Back to even scores at 21 all with 20mins left.

More pressure from Fiji pushing up the field, moving the ball side to side very similarly to the Force in the opening of the match. Looking to isolate a defensive player which resulted in Cyril Reece at outside centre straightening through gap, putting Fiji in front, 26-21 as the kick was unsuccessful.

Over the next 10 mins both teams fielded a lot of their reserves, and things slowed down around the set piece as a lot of conversation was had, but the general play was still brilliant to watch with everything being thrown into the game. The Force scrum was penalized, much to the disbelief of the players, but it was replacement scrum half Seru Vularika who reacted fastest, tapped way off the mark and took off, passed to his right, the ball got toed ahead and once again that man Alivereti Veitokani there in support and at full pace collected the ball off a small chip from the ground to score. Converting his own try pushing the scoreline to 33-21 with a few minutes left.

The Force then through everything at the Drua and were guilty at times of pushing too hard, losing the ball in last passes and within diving distance from the line. This made for a butt clenching final few minutes for the home crowd in the hopes that a turnaround could occur. The clock zeroed and Andrew Deegan went over for the last try of the game and once converted the final score after an exciting game 33-28 to the visitors.

A fun game of rugby, for which both teams were clapped and cheered from the field by the large crowd. In beating the Force today, the Drua grabbed the Horan-Little Shield at the end of the home and away season, which was expertly presented post game.

The Drua have finished on top of the ladder and have secured home finals for as long as they are winning, while the Force drop down to third spot and are likely to face off against QLD Country next week on the Gold Coast. 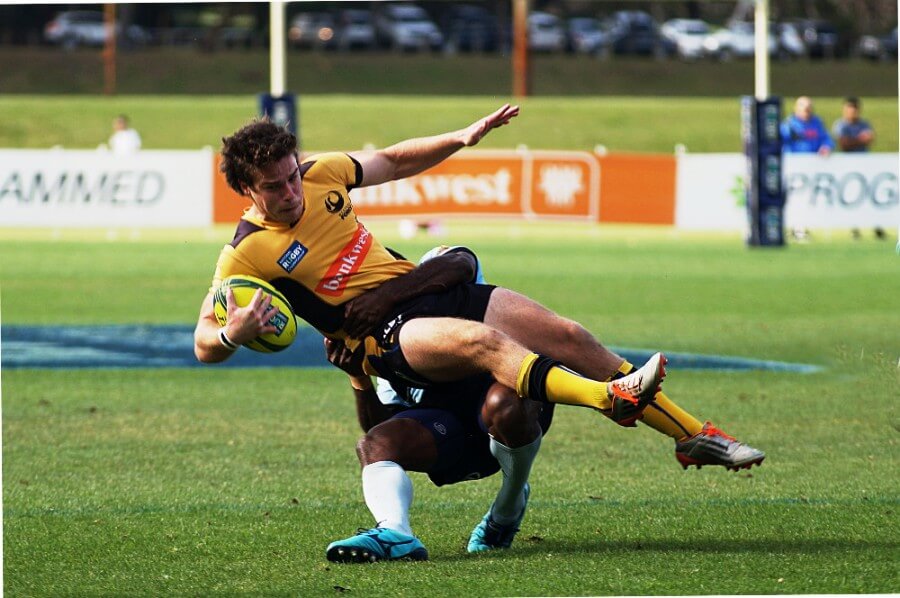 The scrum penalty against the Force at about the 70th minute.

The try scored by Alivereti Veitokani from the scrum penalty to push the score to 33-21. It provided breathing space to the Drua that the Force couldn’t overcome..

Plenty of players had great games, it was that type of match, but Alivereti Veitokani bends time and space. He was involved in everything – taking on the line, creating space, feeding forward runners, freeing wings, setting up tries and scoring himself.

Alivereti Veitokani had a quiet start, but once he started to up his involvement rate and utilize all the options at his disposal he didn’t put a foot wrong. Andrew Deegan started beautifully – distributing the ball with the flattest of passes through the eye of the needle, hitting runners with precision and as a growing Australian 10 must definitely be on the spring tour.  Honourable mention for Harrison Lloyd, the young Western Force Loosehead. Watching the Force scrum completely demolish the Drau scrum today, and knowing the experience of Heath Tessman and Kieron Longbottom across the front row, Harry Lloyd must be recognized, not only for his scrumming but for general play efforts as a front rower. Keep an eye on this young man.