Melbourne Rise over the Vikings

Melbourne Rise over the Vikings

The Melbourne Rising have claimed the Horan Little Shield with a big 60-44 win over the Vikings in Canberra, scoring nine tries to six. A hat trick to Tom English and a double to Lloyd Johansson saw the Rising come away with the victory.

The Rising had first use of the ball and were looking good before a knock on in the Vikings 22 saw them come away with nothing in the opening minutes.

Both sides were unable to capitalise on good field position in the opening 10 minutes with the Vikings failing to find touch from a penalty and then unable to secure a lineout, whilst the Rising knocked on after a number phases right on the Vikings line.

The Rising finally took advantage of the weight of possession and opened the scoring after 15 minutes after strong forward play in the Vikings 22. It was Rising captain Tom English who scored in the left corner to give his side a deserved 6-0 lead.

The visitors controlled the next stretch of play mostly through their forward pack and never let the Vikings get into any rhythm. Scrum half Mick Snowden, who was in for Nick Stirzaker, was having a great game and a quick tap caught the Vikings napping and eventually Sam Jeffries dived over for the second rising try and Debreczeni’s conversion made it 14-0 after 25 minutes.

The Vikings were having to try anything to get around the strong Rising defence, and they nearly got a result after Robbie Coleman re-gathered his own grubber kick and found Sam Carter in open space but the pass was forward to deny the Vikings their opening points.

With less than ten minutes remaining in the half, the Rising went further ahead to a somewhat contentious try to Jack Debreczeni after he danced through and around some defence that seemed to be waiting for an obstruction call from the referee after he got tangled up with Lloyd Johansson in the lead up.

The Vikings finally got on the board before the half time break, on the back of penalty that gave them a chance to launch a rolling maul and Josh Mann-Rea controlled it at the back for the try to make it 20-6.

That sparked the Vikings into action as they launched another attacking raid just before the half time break and another rolling maul from a penalty saw Josh Mann-Rea with his second of the day to make it 20-12 at half time.

The Rising came out in the second half prepared to attack and they used their backline effectively to keep the Vikings on the back foot and Tom English was in for his second try of the day after a neat backline move to restore the 14 point margin.

It didn’t take long for the Vikings to return the favour with their forwards making small gains off pick and drives in the Rising 22 and Tom Staniforth burrowed over to get the Vikings back in the game at 26-20.

It took ten minutes of the half for the Vikings to hit the lead for the first time after an error from Jonah Placid where he allowed the ball to bounce and was caught in possession.

Form the penalty, the Vikings went to what they know best in the rolling maul and Josh Mann-Rea had his hat trick in the bag. Thompson’s conversion had the Vikings in front at 28-26 but almost immediately the Rising went back in front after an intercept try to Lloyd Johansson.

The end to end action continued with Robbie Coleman slicing through the Rising defence and the Vikings went back in front at 36-32 with Sam Carter getting on the try scorers list after being denied earlier.

The scoreboard attendant barely had a minute to rest as the Rising went back in front after a nice break fro Ikapote Tupai down the left wing and he found Johansson for his second try of the match. Debreczeni converted to put the Rising in front by four points with 20 minutes remaining.

The game started to heat up a notch with a number of big hits and the referee had enough after after Lausii Taliauli almost cut Mick Snowden in half with what was deemed a no arms tackle and was give an ten minute rest.

The Rising took advantage of a penalty in the Vikings 22 and the extra man was too much for the Vikings to hold out as replacement Alex Toolis slammed the ball down to make it a ten point game and the right off the restart, the Rising all but sealed the game as Tom English found open space down the left wing and had his third try of the game as the Rising nudged past the 50 point mark and an 18 point lead.

There was a chance of a late Vikings comeback as Isaac Thompson converted his own try to make it a ten point game with less than ten minutes remaining and despite some desperate play, they couldn’t bridge the gap and the Rising added a late try for good measure to Sione Tuipulotu as the Rising ran out 60-44 winners. 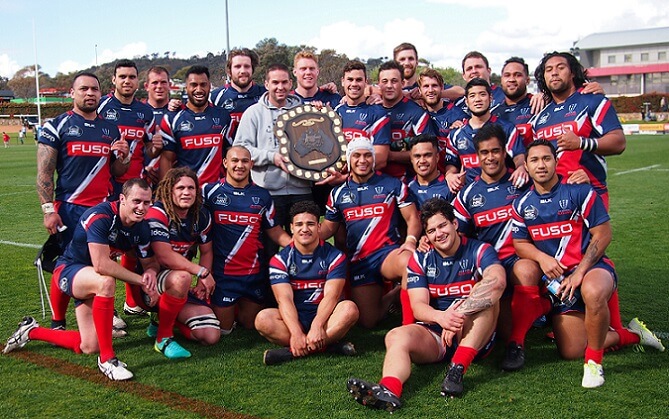 Plenty of contenders but Mick Snowden from the Rising gets the nod after a late starting call up with Nick Stirzaker ruled out and lead his team very well, finding space around the edges and getting his side on the front foot.

Ikapote Tupai (Rising) – Melbourne used their forwards well at times and was heavily involved throughout.
OJ Noa (Vikings) One of a few in the Vikings side without a Brumbies contract but played well in a beaten Vikings side.