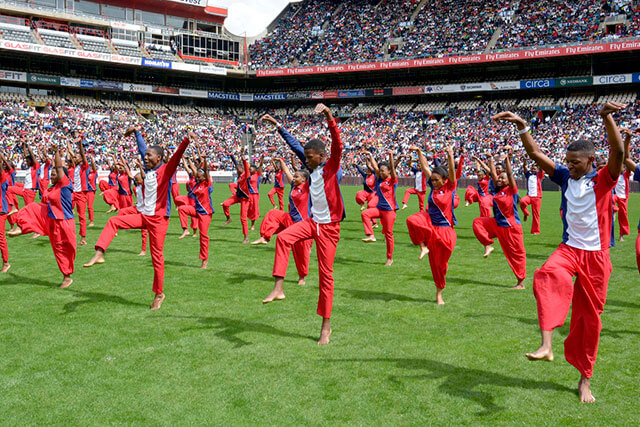 This week the Melbourne Rebels travel to the Republic of South Africa to take on the Emirates Lions in Johannesburg. A win by any margin would be a great result for the Rebels while the Lions need a win to stay in touch with the conference leaders.

Losing Grand Finalists for the past three seasons, the Lions have had a reasonably tough start to 2019 with two wins from four matches. They opened their season with a win in Buenos Aires against the Jaguares then suffered losses against both the Bulls and Stormers. Last week they defeated the Jaguares for a second time in a high scoring match, 47-39. After making eight changes to the side that lost to the Stormers, the Lions dominated the first hour of the game only to concede four trys in the last quarter to cost themselves a bonus point. Currently, the Lions are on nine points and sit in 4th place in the African Conference and 9th overall.

Although the Melbourne Rebels are undefeated in three games so far this year it is difficult to guage their form. They have beaten the Brumbies twice and a somewhat understrength Highlanders side. Last week at AAMI Park the Rebels put on four second half trys to come back from a 16 point half time deficit to record a three point win against the Brumbies. The Rebels top the Australian Conference and are in third place on the overall table with twelve points.

The Lions and Rebels have met on four previous occasions, with the Lions winning all four matches. Their most recent clash was in Round 11, 2017 which the Lions won easily, 47-10. The Rebels have never won in South Africa with a draw their best result.

Visiting teams always find it tough playing at altitude in Johannesburg. The Rebels will find it harder than most this week; as many as 13 players were involved in a weekend Wallaby camp and did not join their team mates until late Wednesday. This will have affected their preparations and given the late arrivals less time to acclimatise to the thin air. Coach, Dave Wessels does not seem too concerned.

“They only arrived a day later than what we normally would if we had played on the Saturday night in Melbourne.

“It’s pretty standard prep for us and I think we’ve done some things differently in the way that we’ve trained – traditionally we’ve gone pretty easy at the start of the week and built into it where we’ve probably done the opposite this time around and I think it’s really worked.”

The Lions play an attractive style of rugby and are never afraid to throw the ball wide to their speedy finishers. The Rebels’ defense will need to be on point from the kick-off or the Lions will run around them as they have done in previous meetings. I think the Rebels must score early and be able to hold the Lions out if they are to win this one. Players tend to tire more than usual towards the end of games on the Highveldt so another come from behind win is unlikely.

During the week, Lions coach Swys de Bruin paid the Rebels some respect, “They’re a very dangerous team, with a great spine, and Australia’s best outfit,” he said.

The Rebels’ set piece will be tested again as the Lions forward pack hammered the Jaguares last round. Props, Dylan Smith and Carlu Sadie were standouts for the home team, just as effective around the ground as they were in the scrum.

Malcom Marx with ball in hand

Captaining his side in the absence of Warren Whitely, and arguably the world’s best Hooker, Malcom Marx is always a player worth watching. By his standards he has had a relatively slow start to the season but is working his way back into his best form. Anaru Rangi will do very well if he can help contain Marx’s influence.

Not unlike our own Quade Cooper, Elton Jantjies is somewhat of a polarizing figure in South African rugby. On his day he is capable of putting players through gaps on either side, is fond of the grubber kick, and is not afraid to run the ball into traffic. He is also prone to playing the occasional poor game, last year’s grand final a case in point. His big left boot could be a factor in deciding the winner.

Although a light weight in the backrow, playing at #8 this week, Albertus Stephanus Smith is a constant pest at the breakdown and rarely misses a tackle. The former Sevens player is a real threat when he has the ball and can show off his speed and strength in contact.

Will Genia was superb in last week’s defeat of the Brumbies and will need to be on top of his game again if the Rebels are to have a chance. Genia has been acting as the Rebels main playmaker, allowing Quade Cooper to underplay his hand and inject himself into the game when required. The 9, 10, 12 combination of Genia, Cooper, and Meakes has been the key to each of the Rebels’ wins.

Right winger, Jack Maddocks has scored five trys in three games and has really benefited from playing outside Cooper. He is athletic, has great hands, and a real knack for being in the perfect position to finish trys. His tackling is improving but still a work in progress.

Millions of Rebels supporters from all around the world have been hoping to see Luke Jones play more often on the blindside flank. This week he will be starting in the number six jersey. The Wallabies have a number of options in the second row but no one has established themselves as the first choice blindside. A big performance here could cause Michael Cheika to take notice.

The Lions have made four changes to last week’s side. Lock Marvin Orie returns to the starting side from injury, he will be joined in the second row by Stephan Lewies. Ruan Combrinck will start on the right wing with Tyrone Green at fullback. Reserve Hooker, Jan-Henning Campher will have a chance to make his Super Rugby debut.

The Rebels have made a number of changes, reverting to a front row of Faulkner, Rangi and Talakai. Ross Haylett-Petty will start in place of Matt Philip while Reece Hodge gets his first start of the year replacing Marika Koroibete. On the bench, Angus Cottrell returns to the side while Sione Tuipulotu has been named for the first time this season.

Australia’s top team up against the best South African team of the past several seasons? That has to be worth the price of this week’s Kayo subscription. Plus, the game will start at a not-too-bad time of 12:05am; you can watch the game and still be in bed by three. Let’s find out if the Rebels are infact the real deal and if the Lions are still contenders.

Usually I am loathe to tip against my team no matter how ridiculous the odds and this week is no exception. I’m predicting the Rebels to prove the bookies wrong and win by three points (although a bonus point loss wouldn’t be a bad result).