Win a copy of the IRB World Rugby Yearbook 2011

Win a copy of the IRB World Rugby Yearbook 2011

The IRB World Rugby Yearbook is an attempt to replicate the wonders that is the little yellow bible of cricket – Wisden. Where it falls short is tradition (Wisden has been 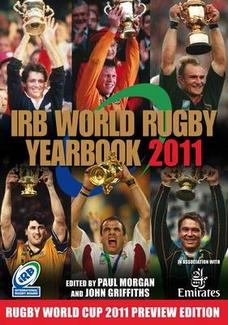 produced annually since 1864) and the fact that most rugby supporters aren’t the ‘train spotters’ that cricket supporters are.  Cricket is just made for the stats-craved loon (like myself) and Wisden is, as it is nicknamed, the bible for such supporters.

This year’s version of the IRB World Rugby Yearbook is a fair attempt at replicating Wisden, whilst still falling significantly short. This is of no fault of the publishers of the book, nor the IRB.  There is no doubt that this book is produced in line with the IRB’s objectives of selling rugby as a global game.  The yearbook manages to cover the sport, in fair detail, for most of the major and some of the minor rugby playing countries.

Being the 2011 version of the yearbook, the focus is two fold. Firstly, looking ahead to the biggest event of the rugby calendar this year, the Rugby World Cup in New Zealand. The stand out article is by the Big Vic – Victor Matfield, about the Springboks’ win in 2007. Then there’s the standard propaganda article about how the kiwis are going to host such an awesome event. More of the same follows with a few IRB spruiking pieces, one notably celebrating 125 years of the IRB (and they still haven’t got it right). So a mixed bag to start.

But, like a Playboy,  no-one is going to buy this publication for the articles. Also like a Playboy, its the figures inside that are the big attraction. And for a rugby nerd like me, vavavAVOOOM, there are some beguiling figures.

There’s some top level stuff from previous Rugby World Cups, but then it gets into greater detail with all of the year’s main events: the 6 Nations, Tri-Nations, Womens’ World Cup, the 7s series, the Junior World Cup. It’s all there.

One of the finalists for the photo of the year.

What I love though is the statistical breakdown for each of the World Cup Qualifiers. All test records are there, plus a listing of ALL players to have represented that country with their own individual statistical breakdown. Is stats-sational. Throw in the same type of stuff on the British & Irish Lions and its perfect bog room reading. Just something to pick up and glance through, whether you have a couple of minutes or half an hour. Take your time.

Once they finish with the International stuff, its time to move onto the provincial comps and once again, all the detail you need is there. It’s basically just a summary of the season past for everything from the Asian 5 Nations and Pacific Rugby Cup all the way through to the Super 14 and the Heineken Cup.

The book also has the finalists for the IRB/Emirates Airline Rugby Photograph of the Year 2010. Without spoiling it for you, the winner was the one in the title page of this article, entitled “Bengal Khuki” as it captures a group of Indian girls playing rugby in an orphanage just outside of Kolkata. It’s an inspiring story behind the photo, but seems to be more the politically correct selection, as a number of finalists seem to be, rather than the best rugby shot. Still…it’s a great shot.

As it turns out, Green and Gold Rugby have two copies of the book to give away to our loyal readers. All you have to do to enter is come up with a caption for one of our favourite photos of the year, see below, and tell us what’s going on between Robbie Deans and Ben McCalman at Wallaby training? Feel free to leave your thoughts in the comments section, but if you want to win the book then you need to e-mail it to us at rugbyreg@greenandgoldrugby.com with your caption, along with your full name and mailing address. You have until the 11.59pm (Briso time) on Monday 31 January, 2011, with winners announced few days after that.

What the hell are Robbie and Ben Mc doing?