G&GR Media Watch: Interpreting the advertising for the Lions tour 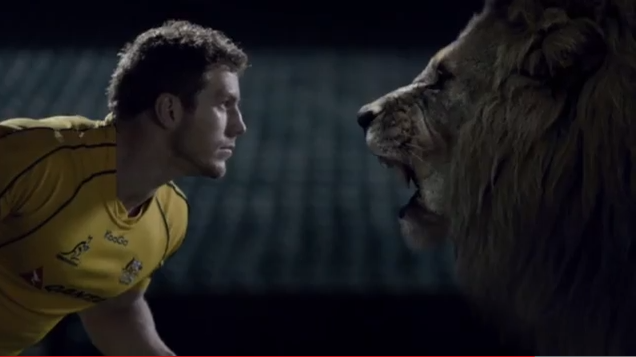 G&GR Media Watch: Interpreting the advertising for the Lions tour

This week I take a look at the advertising strategy for the coming British and Irish Lions tour. The subtext and narrative will amaze you. 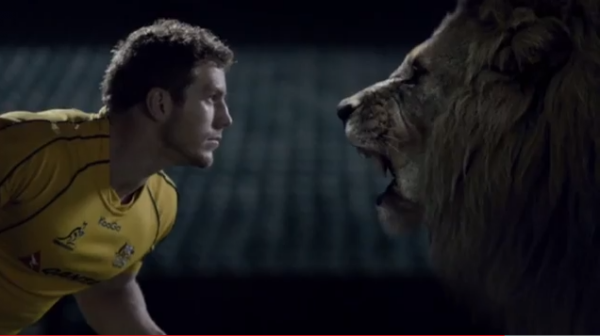 The use of iconic images in advertising is a tried and tested way of subliminally associating a sporting contest or brand with a known narrative. Often this is disguised so well that the association is subconscious.

The first ad released for the coming Lions series featured David Pocock fearlessly facing down a roaring lion, evoking Daniel and the Lions’ Den associations. This imagery was used to describe Chamberlain leaving a meeting with Hitler, but I’m almost positive that wasn’t the linkage they were looking for.

Pocock’s knee injury meant that a new campaign was needed, and what we’ve ended up with is, on the surface at least, downright baffling.

We all understood the Lion – the Wallabies are, after all, playing the British and Irish Lions – but, like David Pocock, I was initially flummoxed by the gorilla. I mean, lions and gorillas don’t even occupy the same habitats. Or climates. Sure, they’re both big animals I guess, but the gorilla is much bigger than the lion… alas, I digress. 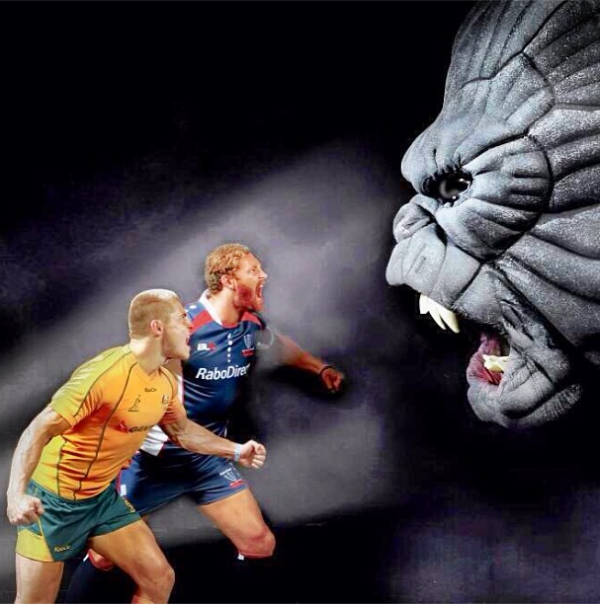 In the lion-Lions ad, our injured warrior is calmly staring down his aggressor. Unfazed by feline halitosis, his eye line meets that of the lion, conveying a sense that we will face the Lions calmly, undaunted, confident in our ability to get the job done. We are equal, man-on-man (or man-on-lion for the pedants among us).

In the gorilla-Lion image James O’Connor and Scott Higginbotham are shown railing furiously against a gorilla looking down on them, poised  and ready to attack. Although both players are expressing pluck and fight in the face of the overwhelming strength, size and power of the gorilla, it is clear that both James and Scott are outgunned, outweighed and out-of-their-depth.

So somewhere between the first and second ad the Wallabies went from calm, in control, and facing an enemy on equal footing, to one where even though they outnumber their opponents two to one,  they are underdogs bravely facing a powerful and furious enemy that can, and probably will, kill us.

Alas, all hope is not lost.

Regular forum readers would know how confident I am that the ARU has excellent reasons for doing what it does – using a gorilla in a campaign about the Lions will be a deliberate and calculated act that contains hidden nuances, layers, and a narrative that will stun and amaze even the most jaded and cynical among us.

James O’Connor tweeted that it was a King Kong reference, and while I think Planet of the Apes would’ve been the more appropriate allegory, I’ve never played professional rugby so I’ll defer to those who have. Under this reading of the text, James O’Connor is a young actress named Ann Darrow (played by Fay Wray in 1933 and Naomi Watts in the 2005 remake) about to tame the beast-like gorilla with juggling, dancing and love.

When camera flashes enrage the gorilla, Kong takes young James/Ann hostage. In this image, Scott Higginbotham – with his facial hair – is the fighter pilot who shoots the bursts of gunfire that tragically kill the lion gorilla.

But what does this mean? And why would we use this in advertising the for the British and Irish Lions? Well, I’ve come up with a few answers.

I like to think that King Kong is a reference to the real fear that the Lions players, having escaped from the deserted Ireland island, will destroy our cities and covet all our attractive lady-folk. I don’t know about you, but I feel safe in the knowledge that my virtue will be defended from their brutish, pillaging ways by our warriors in Wallaby Gold.

Or perhaps it’s a commentary on our fractured modern society, which has seen so many social norms dismissed and broken. Are we essentially occupying a zoo where gorillas and lions intermingle? And scientific discovery is advancing at such a rapid rate that gorillas can metamorphose into lions seemingly at will? It’s certainly something to think about.