GaGr’s Big Questions: Is the ARU Board Blameless? 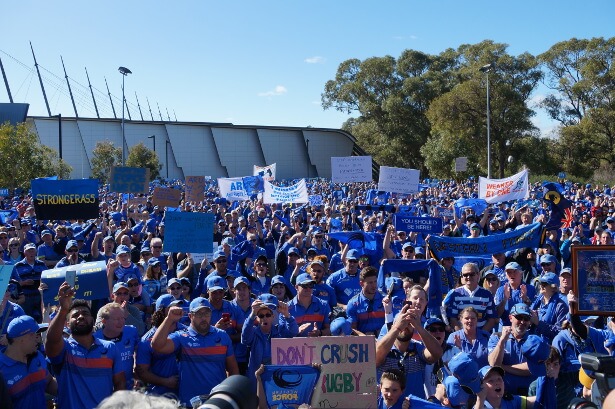 GaGr’s Big Questions: Is the ARU Board Blameless?

This week the 2018 Super Rugby draw arrived and besides from the shock of having the Sunwolves in the Australian conference. ( I don’t know why I was shocked, I mean what else was going to happen) And no Force in our conference! But besides from that, I was like… Meh!

I’m a rusted on fan. I played my first game in 1978 when I was 14 and played well into my thirties and only stopped when my body stopped working like it’s supposed to. I’ve been to every test match and Super Rugby game since… Well, it’s so long I can’t remember how long it’s been. I’ve been on Green and Gold since 2007, I’ve written articles, moderated on the forums, learnt how to take sports photos and perform many menial jobs to help the site run smoothly. Don’t get me wrong here I’ve had a lot of fun and made a lot of friends doing that stuff. And yes they are real in the flesh friends, not internet friends although there a heap of those as well. But back to my rather long-winded point, If I’m meh about Super Rugby next year how is your average fan feeling and how did we get here?

Did the ARU win the battle and lose the War?

I started thinking how did we get here and who made the decisions that lead to this? The obvious answer is SANZAR, The ARU board and later on SANZAAR. I decided to look at two decision that I thought was critical to everything that followed and because the ARU had veto power over all decisions made by SANZAR AND SANZAAR l decided to look at who made those decisions.

The decision to expand into Asia and South America.

For me, this decision was always about South Africa’s desire for a sixth team. Nothing will convince me otherwise. But why we went along with it is a mystery to me. Where was the upside for us? There was increased travel and round the world trips to play three games. Higher cost and a confusing conference system. Not to mention the unfair finals system that gave the two South African conferences a second automatic finalist. On top of all this, there was a report by Global Media & Sports commissioned by RUPA that said that expanding to a 17-18 team competition would be a disaster for Australian rugby. Global Media & Sports had already warned the ARU in 2009 and 2013 that there were structural problems with the Super Rugby format and urged them to stand up for Australian rugby’s interests if the game was going to survive.

On top of all this, there was a report by Global Media & Sports commissioned by RUPA that said that expanding to a 17-18 team competition would be a disaster for Australian rugby. Global Media & Sports had already warned the ARU in 2009 and 2013 that there were structural problems with the Super Rugby format and urged them to stand up for Australian rugby’s interests if the game was going to survive. The ARU board ignored the report just as the had ignored the previous warnings. They didn’t need to convince anyone else they had the right to veto any decision. Why did they cave and go against what clearly wasn’t in Australian Rugby’s best interests?

Of course, it’s easy to sit here and type away knowing what happened since but I’d really like to know what went through their heads?

The decision not to change the 2017 draw and conference system

Moving on about 18 months. Super Rugby 2016 has been a disaster. Crowds are down, television viewers are down, people are confused by the conference system, the new teams are bad, and stories are popping here and many other places suggesting a better way to run the comp. And in my opinion, most of them were easily better. To me, the best ones suggested a return to the three conference system only with six teams instead of five. SANZAAR, unbelievably made the decision to do exactly what hadn’t worked in 2016 in 2017. This is the single most damning non-decision in this whole sorry saga. Once they decided to sit on their hands’ everything that followed was almost inevitable.

I can’t tell you why the decision was made because no reasons were given. SANZAAR did release a press release saying everything was fine and it was business as usual just like last year but only six months later came news of the decision to cut teams. That doesn’t sound like good business.

Are the ARU Board Blameless?

Clearly not. The decisions that they made lead us to the situation we find ourselves in now. Every step along the way they had a choice and it seems they chose poorly. Bill Pulvers decision not to renew his contract has clearly been done with the hope of appeasing the Australian Rugby public, but I’m not appeased. Not in the slightest. Geoff Stooke’s resigned in protest at the Force’s sacking but he was on the board when all these decisions were made.

So fellow Australian Rugby fans what would you like to see happen now? Are you happy with the way our sport has been run? Is it time our board stood up for Australian rugby or do you think they made all the right moves? Let me know in the comments below.