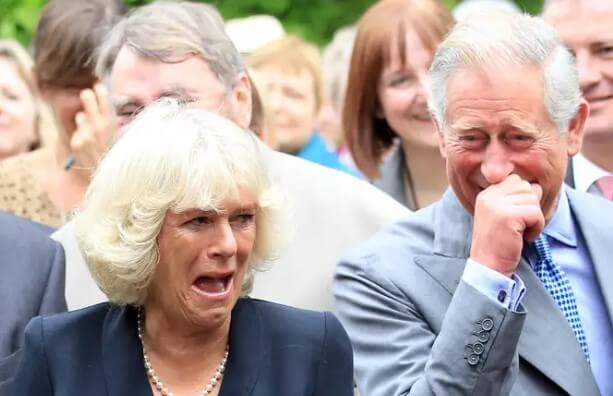 'The Wallabies, beat us this weekend!! Have you seen them play? What do you think mummsy?' Captain of Wales, Chuck Mountbatten-Windsor. (Getty Images / Chris Jackson)
Friday’s Rugby News.

Welcome to Friday’s Rugby News my second-last Friday News for 2021, a-bloody-men to that.

Today let’s painfully revisit the abomination that was the Orange ones’ performance versus The Soap Dodgers last week and have a look at the match against those inhabitants of the hills & dales of Wales. Take a look at the teams for this weekend & rejoice in ANOTHER Kiwi loss last weekend. It really is a tsunami of losses for the venerable rugby deities across the ditch AND what odds The French can make it 2 defeats in a row and Princess Jacinda declaring a week of national mourning for the poxy isles.

We’ll round it all out with Friday’s Fast 5 Bonus, today so ‘manly’, it has chest hair on its back.

You know, it’s one thing to play well and get beaten by a better team on the day. The bounce of the ball here, a ref’s call there , a piece of brilliance by an opposing player, but your team play well and they get pipped at the post. That’s life, you cop it on the chin as ‘fair nuff’ and move on.

BUT. To dish out the dross the Wallabies did at Twickers AND against a Pommy side that didn’t play particularly well themselves, well………that’s WHOLE next-level excrement right there.

A consistent theme of mine this year has been my frustration with the acceptance of ‘excuses’ from fans of the Wallabies performances. ‘We’ve had injured players’, we’re ‘blooding’ players, COVID, travel, Giteau law et – bloody – cetera. These are excuses, pure and simple, excuses.

Doesn’t EVERY other Tier 1 nation face the same challenges to varying degrees? But can you name me a team apart from the Wallabies who has such a DRASTIC margin of difference in their good v bad performances? I mean the ‘gap’ between Wallabies good v Wallabies bad (and I do mean ‘bad’ – as opposed to ‘off’ or ‘out of sorts’) is SEISMIC. It would cause the San Andreas fault to tear California from the West Coast of the nation of Gun Lovers!

So I return to a theme both I and the Claytons Aussie KARL have touched on this year. Our Australian Rugby Union team are soft upstairs. They are fit, they are individually skilled, most are well skilled, but they, as a collective, are mentally fragile.

Think about it. If we are fit enough, strong enough, skilled enough then where do the issues lie that cause such a variation from literally World Beaters to also-rans within the space of a few weeks, culminating in that pathetic showing last week?

Dave Rennie was right post match v the Poms when he said honestly ‘fans back home deserve better’. Yes Dave we do, but until somebody, anybody, grabs hold of the ‘hippocampus’ of those in Orange and reprograms them, then fans will continue to see the chasm between ‘right & shite’ far too often.

Which brings us to the match against the Jones boys, the Kiwis of the North, the Welsh this weekend.

The good news story of the week & boy didn’t we need one, is that James Slipper will get the small ‘c’ next to his name this week in what must be a win for the good guys. Even from a distance Jimmy Slips seems a real good guy and the ultimate team man and deserves every credit and reward this weekend.

Again given time differences between North & South the official Orange side was not released prior to the Friday News being loaded, So once more unto the breach go I:

Yep, I’ve gone with Skelton to actually see what he can do. He has been a victim of crap play from our ‘game generals’ in his brief cameos so far. With Skelton starting I also give Swinton a run as a genuine line-out option. I am keen to give Hoskins another go. He got just 13 minutes against the Poms and he acquitted himself well, Lolo at 10 is worth the role of the dice, Paisami on the pine gives us flexibility on a 6-2 bench later in the game for JOC to go to 10/12, and AK to 15 and Perese to the wing if needed.

Just on the bench, I was less than impressed, AKA ticked-off, with Moses use of the bench in both games so far. The bench use has been very ‘Dingo-esque’ in its use & application. And that sure-as-shit ain’t no compliment.

The only saving grace for the Wobs is that the Welsh have injury concerns of their own. Their hefty list of absentees includes British & Irish Lions like Alun Wyn Jones, Ken Owens, Ross Moriarty, Taulupe Faletau, Justin Tipuric, Josh Navidi and George North.

I could never ever tip against the Orange ones, but I don’t know if I can pick them for this either. Maybe the Welsh injuries and the lift in emotion for Jimmy Slips run as captain might get them home.

How Deep is Your Love?

A reasonable question to ask many a Wallaby Fan I reckon.

When the full time whistle sounds v The Northern Kiwis this weekend, the dust has settled and the smell of tiger balm becomes a distant memory, how will you reflect on the Wallabies of 2021?

A win against the Welsh (no ‘gimme’ for sure) will give the Cadbury Warriors a final test record for 2021 of 8 wins & 6 losses or a 58% win ratio. I said a few months ago on this backwater of the net yocal-fest sacred site that my expectations as a Wallaby Fan, of over three decades, was a win ratio approaching 70%. So even a win this weekend will see the side well below that which it capable of and ought be delivering. Well apart from mental demons that haunt and expose their mental frailties anyway.

A loss to the Taffes will see the year end at 50% with 7 wins & 7 losses and where exactly that does that leave us on the orange brick road to Paris in 2023? For mine the answer is we have more questions than answers.

So, let’s jump forward to a possible 2023 RWC Wallaby match-day XXIII. Who are our best players so far that we could honestly pencil into that sheet?

Park, if you can, state bias’ & petty grievances aside for a moment (you know who you are Reds fans) as I ask you to ponder the following:

Who the bloody hell are the best XXIII to deliver us to the promised land in 2023? Well, here’s what I do know that we don’t know for sure in the context of 2023 (read it again, it makes perfect sense):

For the sake of the exercise let’s assume the Giteau Law remains in place or a slightly watered down version allowing 5 x OS based players to make the XXIII.

Be keen on your thoughts and if you reckon that’s a tough one, what if I said who makes your RWC touring party of 30-odd?

So in the scheme of things, what has this Wallaby fan learned this year about our team, depth, cementing of positions and any signs of improvement in the Wallabies overall? Not so much.

‘Signs of life in the Tahs Universe, with coach Father Ignatius Darren ‘Garry’ Coleman declaring his love for three young men in particular. ‘I love them all already. They’re really dedicated kids who train so hard, so dedicated to the cause so they are all going to go on and be good ten-year professional players’. The three ‘kids’ are Will Harrison, Ben Donaldson & Tane Edmed – all staking a claim to wear the hallowed blue #10. Add in the return of Hooper, Holloway & Hanigan & one half the former Reds prop twins (twins all look the same to me) Ruan Smith and suddenly there are some signs of life in the sky blue AND #1 Ranking and birthright in Oz rugby beckons.

Planetrugby.com reports the coach formerly known as Jaco Johan, Rassie Erasmus, has been suspended from all rugby activity for 2 months.

Six charges of misconduct against the Springbok boss were upheld after World Rugby responded to his behaviour towards match officials during the Springboks’ series win over the British and Irish Lions. Erasmus is also banned from all match-day activities, including coaching and media duties, until September 30, 2022

It should also be pointed out that this is far from a ‘victimless crime’ or a coach ‘blowing off steam’. You can read the impacts it had on Nic Berry AND his family here courtesy Rugbypass.com

The SMH reports everyone’s favourite prophet and BBQ host, Mr Israel ‘Dusty Springfield’ Folau, could be making a run at QPRQ state politics. Obviously Mr Folau has been spoken to directly by God (although she denied that in an interview with me 2 years back), his Dad, his agent, a dog called Cecil and an old wooden post Clive Palmer. Of course it’s just scuttle-butt at present. But anybody who promises to burn “drunks, adulterers, liars, fornicators, thieves & idolaters’ is alright with me, cause I’ve had it with the Liberal Party.

It don’t get any easier for the Kiwis do it?

Fresh from being rolled last week they face possibly the best team in Europe,the French laying in wait for a Paris ambush. Hindsight is always 20/20, I’ve never understood how watching cricket helps with the past, but anyway, I would agree it seems the Wallabies certainly did host Le Frogs ‘C’ team earlier this year. The French are at full strength for this mouth watering line up. A game, that must be said could shift the dynamic of power in world rugby in the run to the 2023 RWC in France. Imagine what a French win does for the side & the rugby-loving public of France. Add in a second defeat up North for the Nearlies. Growing discontent with NZ coach Fossie B Bear and well, this could be the most interesting game of rugby of the last 5 years methinks.

You still want a cherry on top? The possible showdown between the world’s best #9, Aaron Smith and the heir apparent Antoine Dupont will be worth the price of admission alone, or viewing a leisurely Sunday replay at home.

Until next Friday. Do it for ‘Slips’ Wallabies & Au revoir