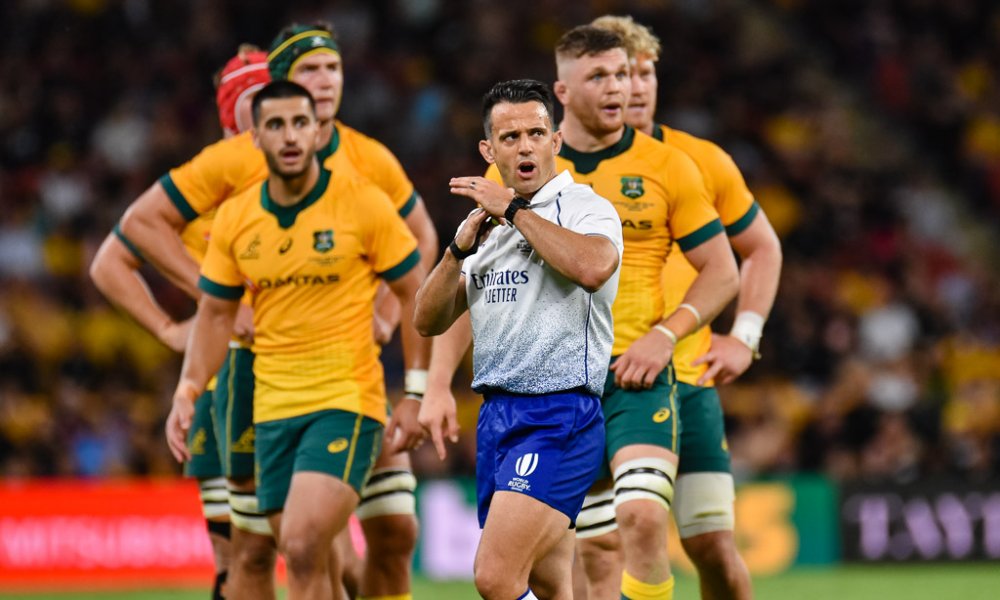 Well, G&GRs, Rassie-gate has finally reached its conclusion. Months after the appalling video was “leaked”, World Rugby’s investigation has finally handed down the verdict that was blatantly obvious from the moment the first few minutes of footage were viewed. I apologise for a bit of a rant; however, this is an issue that cut me deep. I know Nic Berry as a fellow referee. Indeed, I’ve worked as a subs controller in Super games with him. I was horrified and appalled, as were all of my referee colleagues, when this video was “leaked”.

The summary of the ‘punishment’ is:

1. A rugby ban on Erasmus from now until October 2022, with a stricter ban (any involvement of any kind in rugby at any level) in place from 17 November 2021 to 16 January 2022 than the rest of the period (which enumerates a list of actions he cannot participate in: match day involvement, match day attendance, match feedback, and media duties).

2. A warning not to break the rules. (I LOL-ed at this one… Much like Nanny would give you a little tap on the bum and then sending you to bed with no supper)

3. A command to apologise fully and publicly to Berry and the other match officials from the first test in the Lions series.

Naturally, of course, and as his right, Erasmus et al will appeal the verdict. Many, including myself, feel as though the punishment is far too light. That said, I appreciate that some punishment is better than no punishment at all. Furthermore, this is the sort of ‘half-way verdict’ that may be able to withstand scrutiny and/or change in an appellate court down the line thus ensuring the verdict that is reached is upheld.

All this being set aside, I’m still absolutely disgusted that this act of character assassination even made its way into he public domain. Tellingly, this was subsequently pointed out by the panel by their belief that Erasmus is smart enough (or ought to have been) to understand the ramifications of sending an email/WhatsApp message to a wide list of recipients (reported as 40) without any password protection or any warning to keep the material confidential. By failing to do either of these actions, the panel adjudicated that Rassie meant for his tirade to go ‘viral’.

The decision, handed down by World Rugby’s independent panel, revealed the stress the incident had placed on Berry, who had officiated in the Springboks v British and Irish Lions Test matches at the heart of Erasmus’ complaints. World Rugby said Erasmus and SA Rugby had failed to acknowledge the “human cost” of his actions.

“Needless to say, the whole situation has been an extremely difficult time for my family and I,” Berry told the panel. “As a match official I understand that our performances will be heavily scrutinised, especially in such a prestigious tournament. However, the public attack on my integrity and character is not something that should be tolerated in any workplace.

“I considered officiating in a Lions tour comparable with that in a World Cup. The appointment is a honour which few achieve. However, due to the actions of Mr Erasmus, my family and I have endured a significant amount of distress and we will only have negative memories of the whole experience.

“I feel that Mr Erasmus engaged in a character assassination of me on social media. I have spent many years trying to build my reputation as an international referee and in the course of his video which was posted online, Mr Erasmus has caused it immeasurable damage.

“I feel that regardless of the outcome and any sanctions imposed, my reputation as a referee and person will forever be tarnished.”

Berry disputed Erasmus’ claims in the video of the events that occurred in the three days after the first Test.

“Throughout this whole ordeal I’ve maintained my professionalism despite being the target of an unprecedented personal attack played out in the media,” said Berry.

“I felt that Mr Erasmus’ video brought into question my professionalism and my integrity as a match official and that there was an inference to be drawn that I was in some way cheating as an official, which is obviously completely untrue.

“My reputation throughout the rugby community has suffered immeasurably from his actions and I acknowledge that the impending investigation will likely lead to more public scrutiny and unwanted media attention.

“However, his actions are against everything our game stands for and I feel it’s important to take a stand against such behaviour. I sincerely hope that the outcome of the independent judicial hearing will set a precedent to discourage similar behaviour in the future so that no person has to experience what I have these past few weeks.”

In reflecting on Berry’s statement, World Rugby was succinct, noting Berry had yet to receive any form of apology.

“No further words from us are necessary,” the panel’s response read. “That is the human cost of [Erasmus’] conduct. It is that cost which he and SARU have yet to acknowledge.”

It is this statement that I wish to hone in on. As you will all know, I am a referee down in Mexico Melbourne. I referee for two reasons: firstly, because I love the game; second, because I’m a trash player. Refereeing is the best way for me to contribute to the game. My story and reasons for refereeing aren’t unusual for many other referees; indeed, Nic Berry himself, a victim of repeated concussions, made his way to refereeing post-retirement through the eye of Andrew Cole, himself a former international referee. See the story here. The key point though is that referees are human. We will make errors whether you like them or not. And, as Berry says, “as a ref, you turn up and you’re on a hiding to nothing”. Indeed, to at least 50% of the spectator and players, we will be deemed ‘wrong’ at our every decision. Furthermore, our decisions as a referee will oft be met with cries of, “bullshit”… or worse…

Rugby has a long and proud history of respect. Fortunately, unlike many other sports, this respect is entwined into the souls of our game for all, including the match officials. Law 6.5(a) states, “The referee is the sole judge of fact and of law during a match. The referee must apply the laws of the game fairly in every match.” Many spectators, willfully or otherwise, neglect this. Now, there may well be referees out there in the local levels who many have tinted glasses at times. It would be folly to suggest otherwise. Furthermore, the level of ability of some referees doesn’t always match the level of the game. Considering every association I know is chronically short of referees, let alone ‘young and coming’ referees, it is often that local matches have referees who do their best but aren’t perfect. That said, at the professional level, where matches are scrutinised to the Nth degree, partisanship, or “bias”, is almost wholly unheard of. Indeed, contrary to popular belief, there are rigorous processes in place. Now, I don’t deny that there are politics involved; however, this is the case in every workplace and organisation.

The argument of paid professionalism, for me, is redundant. Yes, the referees are paid to make decisions. As is every single person with a paid position including the 30 players on the field at that time, all of whom makes decisions that can affect themselves or other people (whether they realise this or not). Furthermore, if we hold referees to an unattainable standard, we must then hold the players and coaches to the same. Imagine, in a match, when a back knocks the ball on off the back of a scrum (again), the referee calls him out with some choice, curt and cutting words (yes… I’ve done it before with many a laugh from the forwards). The response, I’m sure, could easily be nasty. Referees, even at club level, are assessed on performances. Sure, at the local level it is less frequent; however, the process for review at the upper level is deep. I abhor any notion that referee performance reviews to be made public as it simply doesn’t do anyone any good – we have seen this in NRL where, in honesty, it makes the situation worse! I do digress in that World Rugby, an organisation of suits and faceless men, could absolutely up its game in how reviews are conducted with coaching staff. In this instance, it is the one area I do agree with Rassie.

All in all, I daresay Rassie and the Bokke will see the ‘punishment’ as well worth it as this interference caused a massive paradigm shift in the BIL series. The ramifications of this could be felt for quite some time.

If you’ve made it this far, well done and sorry. I appreciate that this rant article may cop criticism from some and that my beliefs could, ironically, be referee-tinted! But, as the law book says, the referee is sole judge of fact ;)

I look forward to the Wallabies match on the weekend!