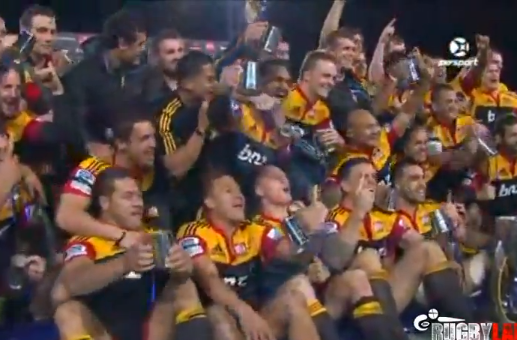 The Sharks knew that they had to start well. They had, after all, been backwards and forwards across the world twice in a couple of weeks and this would surely take its toll as decent rest, and recovery, were denied them. We all said that if the Sharks could win, this would be the greatest win in the history of Super Rugby – but we also conceded that the legendary will-power and toughness of South African players might just pull it off.

Well, start well they did. They had the Chiefs under all sorts of pressure and extracted an early penalty for off-side, under the posts. Schwalger’s throws into the lineout were also under pressure and Lambie’s wipers kick might just as easily have found Mvovo, but, in the end, none of this amounted to any more than the one penalty.

Now – as it often is in these situations of early pressure absorbed – it was the opposition’s turn. SBW on an unders line makes the line-break; the customary off-load continues the play; an immediate pick-and-go maintains pressure on the line; the ball is spread and Tim Nanai-Williams – probably my man-of-the-match – is one-on-one with Jannie du Plessis. This is not a fair contest and the try, plus conversion, totally changes the complexion of the game.

The Chiefs had plans B & C for their lineout and their excellent skipper, Craig Clarke, soon had that part of their game back under control. The game was only 20 minutes old and the Chiefs were all over the Sharks. Sure, they were hanging on and, indeed, showing the occasional, encouraging flash – including one brilliant individual run by Paul Jordaan – but lack of clinical finishing and incredibly committed Chiefs’ defence denied them even the scraps.

The writing was pretty much on the wall by the break and the Chiefs scrum was even withstanding what many, including me, thought might have been a real weapon for the Sharks. Previously influential Sharks players were struggling and some – Michalak and Lambie to name just two – were looking decidedly ordinary. The referee wasn’t helping them – or so they thought – and an obvious yellow-card tackle by Tameifuna was followed by a cynical off-side by Cruden. Tiredness and disappointment were bearing down on any possible resurgence by the visitors, despite their mental determination. It was just too hard and the opposition, on the day, were just too good.

The Chiefs played well. They successfully prepared for all (or so it seemed) possible threats and had prepared a few extra questions of their own for the Sharks defence. Their strategy to use Tim Nanai-Williams in the close quarter situations was brilliant. His footwork and electric acceleration constantly threatened the line and dragged extra defenders in to assist. He even executed one pick-and-go and gained a steal at one tackle – unusual stats for a lightweight flyer.

On pretty much any analysis, this has been a great season for the Chiefs. All of their players were better players by the end of the season than they were at the start. Absolutely full marks to the coaching team. Cruden is virtually unrecognisable from 12 months ago, with Kiwis now thinking the unthinkable: maybe he could get in, in front of Carter. SBW is even better and more discerning in his choice of option. Liam Messam has had a clear PB season; Kerr-Barlow is an All Black in waiting; Robinson could easily play up a level, indeed so could most of them.

In terms of off-field preparation, the balance and agility of all players in the Chiefs line-up was a standout. Hit-and-spin, unders lines, leg drive in contact were in constant presence and gaining clear benefit. When a 120-kilogram, 20-year-old tighthead prop can make two, one-on-one tackles on Israel Dagg (a week earlier), you are definitely doing something right in individual preparation!

Well done to the Chiefs. They led the competition for most of the season. All year they played attractive, but aggressive and physical rugby – which we appreciated and the players obviously loved. They pushed the limits of their individual and group skills and played frequently at the edge.

No one could deny that they earned their title!