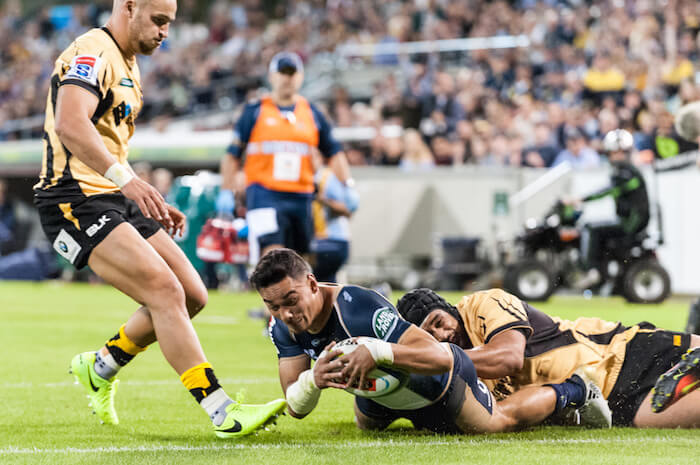 The Brumbies have opened their account in 2017 with a hard fought 25-17 win over the Western Force in Canberra. The Brumbies went down last week in a thriller and this was heading the same way with the Force looking to secure their first win in Canberra since 2011.

It came down to the last ten minutes, when the Force went down to 14 men with Ross Haylett-Petty in the bin for a needless yellow card and the Brumbies took advantage to score two tries in that period to secure their first win of the season.

The Force backline had looked good so far in 2017 and they looked to use that weapon early in the game and it looked like they had scored after just two minutes on the clock but Chance Peni was penalised, which seemed a harsh call.

The Brumbies did well to weather the early storm with the Force unable to capitalise on the early territory and they had the lead after 13 minutes with Henry Speight scoring the opening try.

Neither team could get into any rhythm with dropped balls and penalties the theme of the half to stop the game breaking out into a decent showing.

The Force also had two kicks go dead in-goal to give the Brumbies good field position but they couldn’t take advantage.

The Brumbies scrum was one shining lights of the first half as they marched back the Force pack on a number of occasions.

Chris Alcock, up against his former side, was having good impact in the half and a strong run from him setup a maiden Super Rugby try for Wharenui Hawera in the 32nd minute to make it 10-0.

Just before the half time break, the Force received a penalty and they gave the Brumbies a dose of their own medicine as they kicked it deep into the Brumbies 22 and used their own rolling maul weapon to reduce the gap with Heath Tessmann coming up with the five pointer. Jono Lance’s conversion made it 10-7 at the break.

Whatever Dave Wessels said at half time must have worked a treat as the Force came out with some direct running and easily making it over the gain line to put the Brumbies on the back foot.

The pressure and the overlap was too much for the Brumbies and Chance Peni made up for missing out earlier to put the visitors in the lead for the first time. Lance converted to make it 14-10.

The Force defence at the ruck has been keeping them in the game and it showed again as the Brumbies were camped on the Force line but Richard Hardwick was having nothing of it to earn a relieving penalty.

The Brumbies had a chance to reduce the margin but Hawera’s kicking yips continued as he missed his third shot of the night from a handy position.

But it was second time lucky for Hawera only minutes later as he landed his first kick of the night from a similar position.

The scrum was becoming a bit of a lottery and with just over ten minutes to go, the Force restored the four-point margin from a Lance penalty goal after the Brumbies collapsed the scrum in their own half.

The Force good work was undone after Ross Haylett-Petty was given a yellow card for taking out Joe Powell off the ball. Referee Rohan Hoffmann had just warned the Force about their discipline so it would have been a yellow card anyway.

The Brumbies went to the sideline and with the extra man the pressure was too much and another former Force player, Kyle Godwin, scored to put the Brumbies back in front and Hwera converted to make it 20-17.

The momentum was all with the Brumbies in that final period and they added another try right at the death with Robbie Abel scoring the fourth Brumbies try after only just coming on and crucially the try would deny the Force a losing bonus point as the Brumbies ran out 25-17 winners.

Henry Speight crossed the line for the second week running. Tevita Kuridrani had a quiet night by his usual standards. For the Force, Dane Haylett-Petty was solid at the back with Billy Meakes and Curtis Rona putting in a good showing