The never-give-up BMW Australian Schoolboys team did their country proud today coming back from 3-22 down at half time to tie the match before the young Kiwis came again to win 32-22 at Auckland Grammar School.

Despite the Aussies scoring three tries to two, NZ Schools deserved their win, as they were able to convert into points their two-thirds possession, and the same share of play in the Aussie half.

Both sides showed a willingness to run with the ball but the NZ lads cast a sinister shadow over the Aussie set pieces and had the visitors walking back in scrums and being bullied in the air.

From one scrum transgression impressive NZ first-five, Harry Plummer, goaled a penalty. Worse was to follow when the Aussies put on a move but were just too late with an inside pass—and the spilled ball was hoofed upfield by 7 Sione Havili for fullback Ngane Pulivai to score.

Only 13 minutes had passed but after the Plummer conversion NZ Schools were ahead 10-0 already. 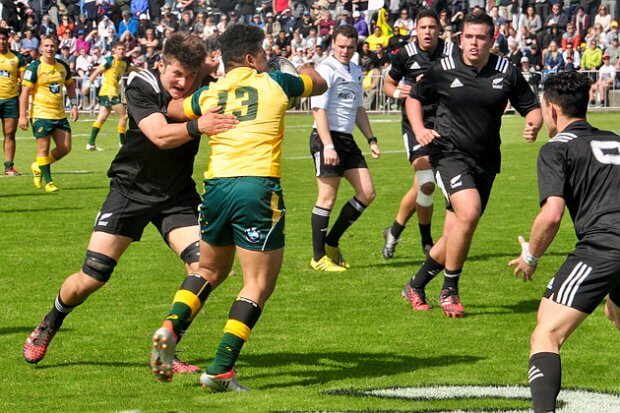 After the first of many runs for the day by THP Opeti Helu, Australia was in a good place for scrummie Ryan Lonergan to slot a penalty. Then, ironically, from the base of the first goodish Aussie scrum, a difficult pass was dropped in the NZ half.

Australia was playing well in the open but were not getting the ball enough in Kiwi territory.

Kiwi Plummer returned the penalty serve with another three-pointer and then kicked long for touch about 80 metres—no kidding. In the right real estate he soon dropped a field goal under penalty advantage. The first-five was having a blinder as NZ led 16-3 with nine minutes left in the half.

Winger Yirbbi Jaffer-Williams put on the real first real threat for an Australian try when he kicked through for himself in traffic near touch, but it was too long.

One of the highlights of the half was when no. 8 Sunia Finefeuiaki ran flat-chat into look-a-like Kiwi 6 Arjay Mua who would not budge. Methinks this will not be the last time we see these young lads colliding.

Another lost Aussie lineout was followed by a surprising scrum penalty in their favour, but it didn’t signify as the Kiwis were making ground in traffic soon after. Their backs were involved too—winger Mosese Dawai was always tough to ground—and Aussie tackling was often negated by excellent short passing on fast-forward to move the target.

At this point I thought that the Aussies were not a bad side going by the standards of recent years, but the Kiwis had raised their game impressively in the same period.

Billy Proctor fends off a tackler

After the break the Aussies had their best period of play in the match.

Helu started a couple of raids but the Kiwis held Australia out though being penalised. Helped by occasional bad ball work by the visitors, they were able to clear until Helu, the hardest player to tackle on the field, rumbled up twice more and and after some nifty stepping 13 Hunter Paisimi dotted down seven minutes after the break.

A poor restart reception seemed likely to negate the recent score but another bruising run by Helu helped clear the ball. 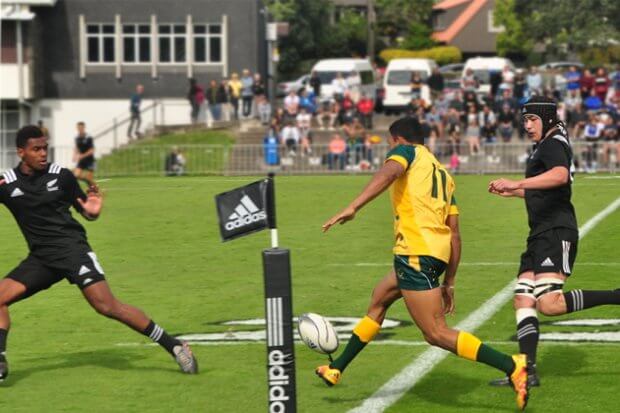 Yirrbi Jaffer-Williams kicks through for Matthew McTaggart (out of shot) and he scores.

14 minutes into the half Aussie fullback Matthew McTaggart threw a long cut-out pass to Jaffer-Williams who threaded a kick back inside for McTaggart, who scored the most brilliant try of the match. It was not the first time they had combined for a try this year as Joeys’ fans can attest to. The extras made the score NZ 22 – Australia 17.

But wait – there’s more. After the Aussies got the ball from the restart reserve flyhalf Isaac Lucas dummied and ran through a gap as wide as Auckland Harbour and kicked through for winger Will Eadie to score. It was like shelling peas, and although the conversion missed the lads in gold had scored 19 points in nine minutes and tied the score 22-22 with 19 minutes left.

There followed a long period of dominance in possession and territory for the home team and the odd poor lineout and scrum of the visitors. The Kiwis heaved themselves at the defenders and seemed likely to score soon and often.

But the Aussie defence was staunch and the occasional NZ pass, wayward. And replacement flanker Fraser McReight was strong over the ball, like a lightweight colossus, to reap turnovers.

Near the hour mark, Australia lost a lineout after penalty relief and NZ had a player return from the sin bin. On the next series near the Australian goal-line the defenders run out of tacklers around the breakdown and lock Lachlan McWhannell launched himself over a dead ruck to score between the posts. NZ 29-22 with the conversion.

There were still nine minutes left but the Aussies couldn’t get the ball and when they did it was too near their goal line and had to clear. It was more urgent when Plummer slotted another penalty goal to increase the margin to ten points.

Australia’s nine minutes of magic was not enough and nor should it have been. NZ were superior not only in the possession and territory stats but also in the bread and butter of rugby. This included set pieces, although at the end of the first half and the beginning of the second, there was a surreal episode of scrum parity. 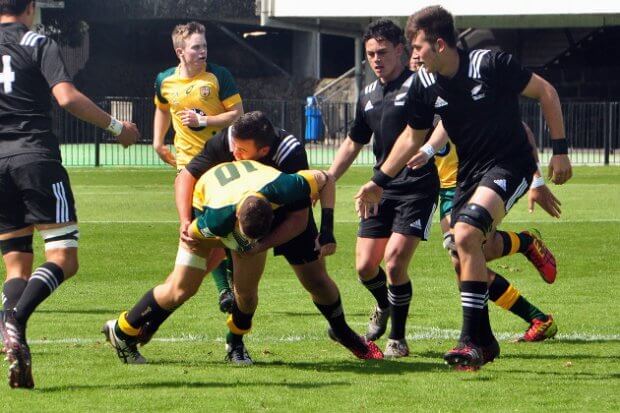 Helu aside, the Aussies made fewer breaches in the tight and suffered too many strips when they tried, with scant retaliation in kind. They also missed too many tackles even taking account of the extra runs by the Kiwis. Dog-leg defensive setups did not help.

The Aussies should be proud of holding the Kiwis out for so long and for their blitzkrieg early in the second half to give them a good chance.

Well done to both teams – this was Schools’ footie at its best.

I thought Lima Sopaga was an excellent Schools first-five a few years back but young Harry Plummer has raised that bar. The mark of a good schools’ player is to play older than his years and Plummer did that, and he also seemed to have more time to do things which is another fine attribute.

Blindside flanker Arjay Mua was reminiscent of a young Kiwi playing no. 8 here in Sydney five years ago, Ardie Savea, and was just as fearless and abrasive.

Openside flanker Sione Havili, who kicked through the ball for NZ’s first try, was a pest around the rucks and shot out at runners. He got the Bronze Boot Award for New Zealand, as voted by the Aussie coaching staff. 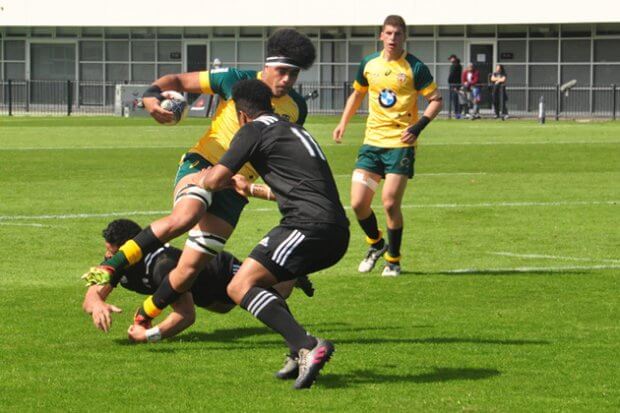 Sunia Finefeuiaki breaks a tackle – one of best Aussies

Tighthead prop Opeti Helu was hard to stop first time even when he was double-teamed and they knew he was coming. He will be a formidable prop in the future once he learns his scrummaging trade because this is only his second year in the front row. He was awarded the Bronze Boot award from the NZ coaches.

No.8 Sunia Finefeuiaki was the player of the 2016 National Championships in my eyes and has continued his good play on tour. Athletic, abrasive and skilful, this young warrior now resides in Victoria and no doubt the Rebels will be all over him.

Winger Yirrbi Jaffer-Williams didn’t have many chances as he would have liked, but he was like a spark plug for the team when he got the ball. 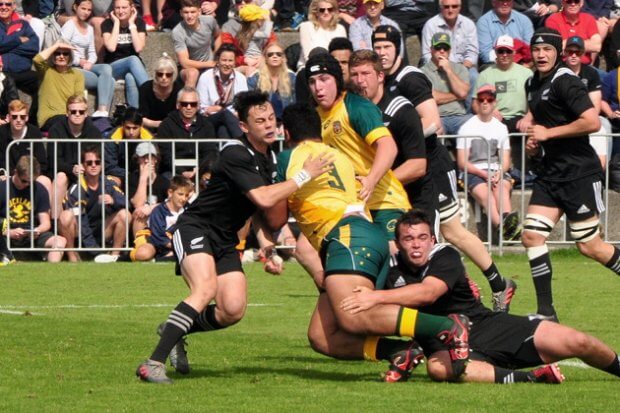 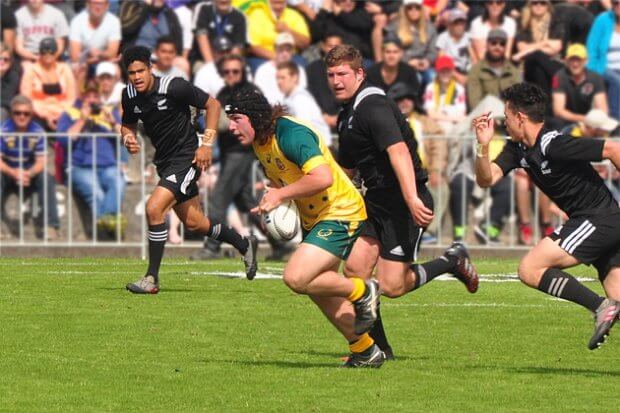 … and Lachlan Lonergan takes off

Photos by “The Honey Badger” except those by Getty Images, as indicated.