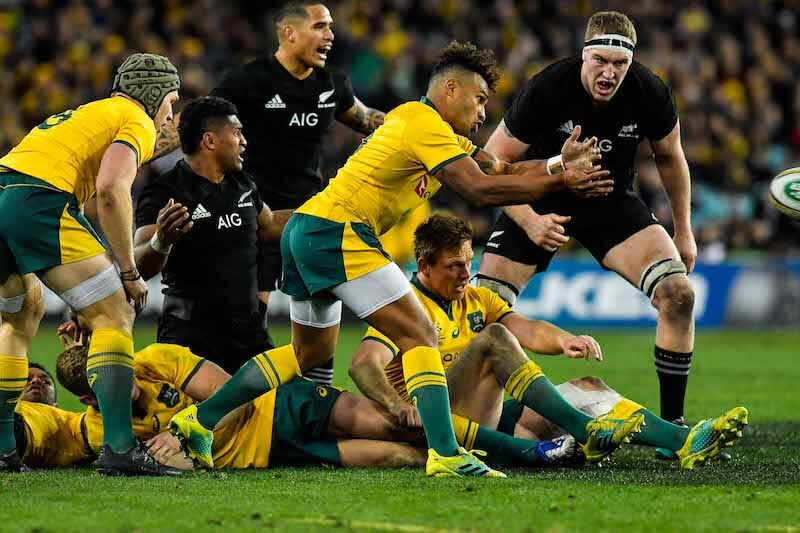 Once again Australia and New Zealand head north for the dead rubber Bledisloe clash. New Zealand is looking to get a sense of the grounds they’ll play at in next years world cup. The Wallabies are just along for the ride

Australia’s lineout woes continued early when they lost the first lineout of the game. They won against the feed shortly after to even the score, but the All Blacks had settled into their patterns and applied enormous pressure to Australia’s shuffling defence. Eventually, the Wallabies cracked when Kurtley Beale missed a one on one tackle on Liam Squire who burst through the line to score 15 metres to the left of the sticks. The try relieved the pressure on the Wallabies and Beale was able to slot a long-range penalty on the 20-minute mark to Keep the Wallabies in it. New Zealand 7-3.

Moments later New Zealand converted a scrum penalty to ease the margin out to seven points again. Then it was back to business as usual camped deep in Australias half apply pressure to the defence. For the most part, Australia was up to the task but eventually, Kieren Read took the ball off the back of a scrum and Ned Hanigan had no chance of stopping him three metres from the line and from the side. 17-3. It was only moments from halftime that the Wallabies had their chance to score. Sefa Naivalu made no mistake scoring millimetres from the corner post. The All Blacks were ahead 17-10 at halftime.

The game is still in the balance but one can’t help but think the All Blacks have the upper hand. The Wallabies had to grimly defend for much of the half and I’m not sure if one Wallaby back, besides Kurtley Beale, is defending in his designated position.

The first 20 minutes of the second half was good hard uneventful rugby with the sides exchanging a penalty each. Until Beauden Barrett’s sensational try off a scrum. T

J  Perenara passed infield to Barrett who switched to Ioane for the crash ball. Barrett loop Ioane who drew in the winger in defence and gave Barrett a clear 35 metre run to the line.

Tolu Latu was yellow carded with about 15 to go and almost immediately after Israel Folau threw a speculator and unfortunately hit Ben Smith on the chest. He put on the gas and ran 40 metres to score New Zealand’s fourth try. With five minutes to go Israel Folau score Australia’s second try off a nice Samu Kerevi offload but Rieko Ioane scored immediately hit back to take the score to 37-20 with minutes to go.

The All Blacks built their win on the pressure they mounted in the first 30 minutes and while the Wallabies stood firm and competed they lost the scoreboard, they lost the penalty count and they lost the turnover count fairly convincingly.

Embed from Getty Images
The Game Changer
Cody Taylor and Tolu Latu’s push and shove exchange. Taylor was the clear aggressor and walked away scott free Latu pushed back and got yellow carded. Both players were culpable and both should have spent time on the naughty chair.

The G&GR MOTM
Look this was two great team performances and singling out any player doesn’t seem fair. Because I have to pick one player my choice is Beauden Barrett who control the match pretty convincingly and scored the try of the game.

Wallaby watch
Samu Kerevi stood out when he came on. Tolu Latu for the wrong reasons. Folau Fianga’a for the right reasons. Israel Folau, I have no idea what position he played but what he did was good.

And the 2018 NRC Champions Are……..
Brian Smith’s Analysis – Sayonara