Coming in to this Super Rugby season I had hopes of the Reds making the top 6 teams and maybe getting a home final. I had no expectation of winning the title. Even in the days leading up to that last game I didn’t believe we would win. It had only been two years since I had suggested to Mrs Sully that we had put enough time into supporting the Reds and maybe this season we might forgo our season tickets. She basically told me to go out the backyard and give myself a few good uppercuts then come back inside, man up and buy the tickets. Now once again we stood at the beginning of a Reds Season full of hope. Like many long time Reds supporters we had seen a few false dawns. We had no idea if this year would be different but there was a lot to get excited about.

It didn’t start well. We had a shaky win over the force before getting flogged by the Waratahs. But the Waratahs game seemed to ..ignite? …unite? I don’t know what the word is, it’s like the Reds took a good hard look at themselves and said we can be better. We had to be. The next week we played the Brumbies. Possibly no other team in the competition has the wood on us like the Brumbies. But the new Reds scraped past them. And never looked back.

People started to take interest. And then the comments started. Lots of them.

But you haven’t beaten the South Africans yet.

But you haven’t beaten them in South Africa. 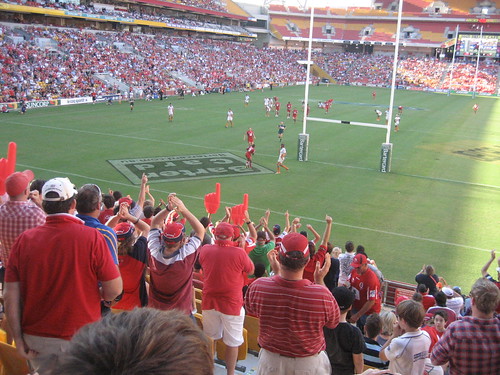 By now we are halfway through the season and I can feel that we’re a good chance to make the finals. The crowds at Suncorp Stadium are starting to grow and I can feel the excitement in the other long term supporters around me.

You haven’t beaten the Kiwi’s  yet.

But you haven’t beaten them in New Zealand.

We went alright. Not great but good enough. I was getting really excited about maybe earning a home Semi Final. I knew it would be a multi million dollar boost for the QRU and we needed it badly. We were back playing our return matches with the other Australian teams. The big one was against the Waratahs who we hadn’t beaten in way too long. We all wanted the win badly. The pressure on the players must have been enormous. It was one of the biggest crowds of the season top only by the Crusaders (I think). I was a lot more worried about the Brumbies and Waratahs games in the late season then the Crusaders game. If you counted trials games we had beaten them 4 games in a row. I thought the guys had figured out how to get the better of them. The Brumbies and Tahs were another matter.  We had forgotten how to win against NSW and never figured out how to do it against the ACT. The Brumbies are still a Reds enigma but we did manage a win over the Tahs. A massive night in the river city.

We came in to the finals in first place. But were instantly written off by the media everywhere except Brisbane. The Reds simple didn’t have enough experience. The front row wasn’t experience or heavy enough. Our backs were too flashy and young. The list of faults with the Reds seemed endless. I didn’t care. The Reds had achieved everything that I had wanted in 2011 and anything from here on was a bonus as far as I was concerned. I think the Reds players thought the same thing. They played like there was nothing to lose. I think one of the reasons was they had already achieved their goals for the year.

The Semi final against the blues was next. 45000 people rock up to Suncorp. The atmosphere was amazing. This was my first Super Rugby final and I was at one of the best Rugby grounds in the world and my team was playing. Rod Davies scored 3 tries. Cooper was everywhere. This was the game he did the amazing run to set up Ben Tapau to score right in front of our seats. The stunned look on the players faces when they realised they had won and were playing in the Final next week was priceless.

55113 turned out for the final against the Crusaders. Absolutely amazing night. The night started with a Green and gold rugby get together at the Caxton. Dinner and drinks with bloggers and forum members form all over. Then off to the game. One of the all time great teams against the best Reds team in along time. Both sides effected by natural disasters, Suncorp still not repaired but the Crusaders home ground was completely destroyed and they had played every game of the year ‘away’.

The Reds built a lead, the Crusaders pulled it back. Then the amazing 65 metre try to Will Genia with Cooper ranging up on his left to keep the cover occupied. The reds supporters went completely spastic. With minutes to go we were 18-13 up with the Crusaders attacking. If any team could win it from there it was the Crusaders. When they knocked on after the hooter absolute mayhem broke out on the field and in the stands. I can’t explain the feelings that flood over me but I can say I want to feel like that again.

And then I made the biggest mistake of my year. I was invited to post match drinks with the GaGR boys at one of the local pubs. The thought of trying to get back to the gold coast in my state got the better of me and I went home. The photos that emerged of the guys partying with the Super Trophy and the Reds players will haunt me forever. I could of been there! I am a Queenslander not some johnny come lately Waratahs supporter in town for a jaunt. 27 year old Sully would have stayed! Shit 37 year old Sully would have stayed! 47 year old Sully went home. Totally my fa 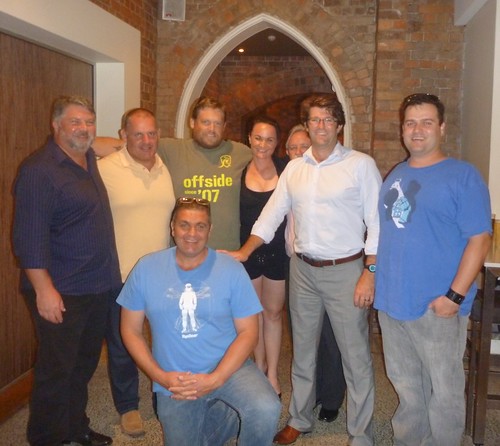 ult. I should of prepared better. A hotel room in the city was all I needed.

Things settle down for a while. Then one of the forum members posted an invitation. He had bought a table at the Red Gala Ball and was looking for Punters to fill the seats. I wasn’t staying home again so I gratefully accepted, hired a suit, organised a hotel room (see I learned) and went for a night of celebration with Queenslands Rugby elite. I got to spend a few minutes with Scott Higginbotham. I spent about 15 minutes with Ewen Mackenzie and about the same with Nick McArdle. And most importantly I socialised with a few people from this web site that I now consider friends.
Finally the GaGr Christmas get together. Special guest Ewen McKenzie. Ewen stayed and chatted with us for most of the night. I meet a few more of the GaGr family including our newest contributor Cat and Mrs Sully even drove up to take me home and got up early to retrieve my car from the train station so I could go to work.

This Reds fan has had a fantastic year. The team I support exceeded my expectations by a long way. The time they give to there supporters in amazing and I would like to thank them for their time.

From this Supporter thank you to the Queensland Reds and all their support staff.