CAS Round 7 – heading for showdown next week

CAS Round 7 – heading for showdown next week 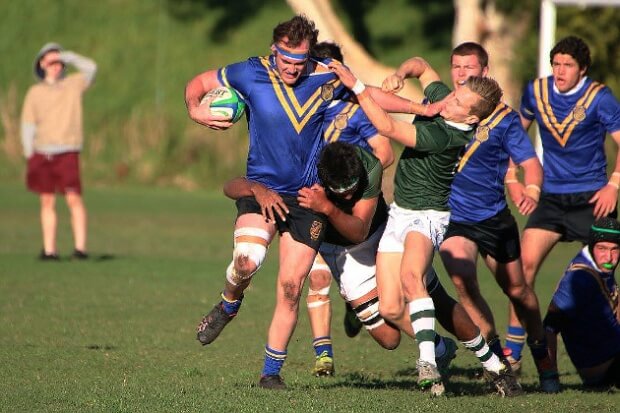 The CAS competition could be virtually decided in Round 7 with three matches to go.

Knox, the 2015 Champions, and 2016 leaders, should remain unbeaten against lowly Barker, and the result between Cranbrook and Aloys would not signify in the Championship race.

The key match of the day would be at “Death Valley” (Queens Park), where second-placed Waverley were hosting a good Trinity side. Should Waverley lose, both teams would likely be two wins behind the leaders with three matches remaining—and it would be odds-on that the Henry Plume Shield would stay at Knox.

Waverley would probably have different ideas though.
.

Waverley proved too strong for a valiant Trinity team in windy conditions at Death Valley.

The first points were scored by Waverley from a quick tap by 9 Tyzac Jordan. ten metres out from Trinity’s line. The ball went through quick hands to 11 Brooklyn Hardaker who carried defenders over the line out wide. Waves 5-0

After Waverley [the the “Double V”] worked the ball downfield through some strong phases of play, 7 Ben O’Sullivan toed through and chased a loose ball on the ground to score between the sticks. Waves 12-0.

It was all Waverley, running against the strong wind and threatening Trinity’s line but the Green defence held strong, except on those two occasions.. 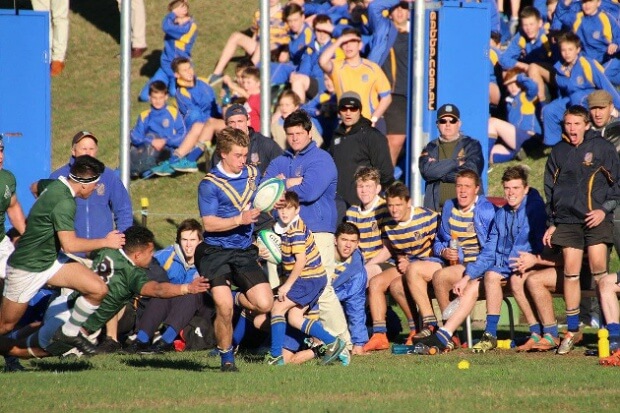 From the kick off 14 Zac Carr managed to kick the ball deep into Trinity’s red zone which resulted in Double V possession. After some good phases of play and ball control by the Waverley forwards, 10 Ben Donaldson dummied and stepped his way over the line for a scoreline of 17-0 to the home team..

Waverley were dominating possession and won two lineouts in a row against the throw-in; but still the Trinity defence was resilient. That is until 15 James Mood chimed into the backline on the halfway line and threw a long ball to Hardaker to score his second five-pointer in the corner.

An excellent sideline conversion by Mood in the swirling windy conditions took the score to 24-0. 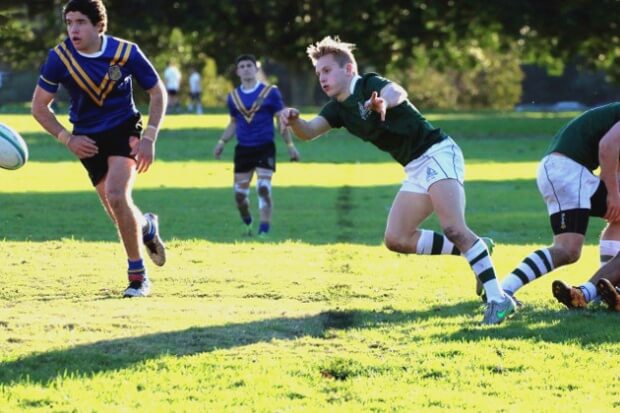 Waverley were dominating proceedings against a valiant Trinity outfit whose scrambling defence never stopped. A raking kick by Donaldson and a long box kick by Jordan continued to advance the ball into Trinity territory.

From a lineout win and a rolling maul, 4 Finn Wright used his power and size to crash over for the fifth try of the match. 29-0.

Waverley finished the game off with a well-deserved barnstorming try under the crossbar to man of the match 6 Luca Moretti, who proved too strong for the defence to contain. 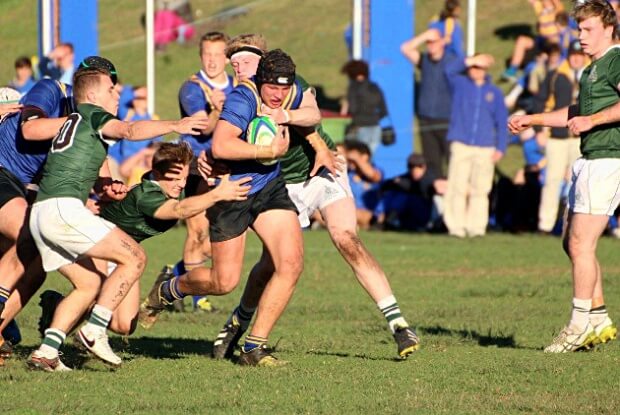 Waverley – Their defence and line outs were outstanding but their coaches will be looking for better execution in attack for next week’s clash against Knox at Queens Park. The Double V left a few more tries out on the field through poor execution.

Trinity had some fine individual performers but they didn’t gel as a team. They didn’t really look like threatening Waverley’s line, but every time they did look dangerous in attack they squandered opportunities through poor execution and choosing wrong options. It wouldn’t surprise to see a vast improvement in their performance next week.

Waverley – Their NSW U16s rep, Moretti was their best player and was also best on the field. Others to stand out were forwards 3 Liam Smith, Wright and 5 Lachlan Drew-Morris—and Donaldson and Hardaker in the backs.

Trinity had some well-performed individuals; 9 Cooper Chambers gave good service and was busy all game; 12 Jordan Morris had a strong match; 6 Liam Rasch and 7 Matthew Stead worked hard and 10 Ryan Longville looked threatening in attack from the fly-half position.

Even though 36 points were scored, the game didn’t reach any great heights as a spectacle. It was a scrappy affair under difficult conditions, but the Double V proved far too strong in both attack and defence. For whatever reason, an unusually long time was spent getting the scrums fed during the match. 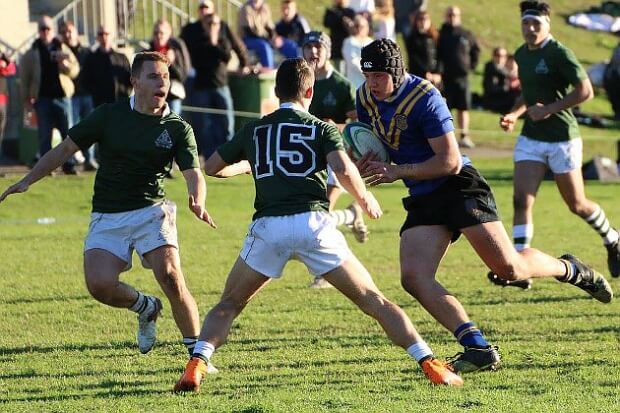 Barker hosted Knox on a cold windy day. Though most thought the result would be a foregone affair, Barker are always strong hosts and the game would be interesting to see what form was carried from the holidays.

Knox kicked off and found themselves with territory, but not possession. Barker may be having a forgettable season, but are dogged and competent in the basics. For long periods of the first half they battered the Knox defence.

A lot of their attack relied on the ball going to a forward in the backline and resetting. It allowed them to retain possession, but was not an effective attacking method against Knox. With strong Knox defence the first half became a dour struggle with Barker offering lots of tackling practice to Knox.

For the first twenty minutes Barker dominated a sluggish Knox side. With possession and good kicking, plus penalties, Barker ground their way into the Knox 22. From a scrum and a quick switch of play, they surprised Knox and scored in the corner after 15 minutes.

Barker had a well-deserved 5-nil lead in a game tighter than expected. Knox looked rusty and squandered possession with penalties and basic handling errors. They also rushed their passes and lacked composure and patience—up to a point—because gradually their attacking efforts gained round.

A good break by Aussie Schools’ rep Armstrong and a well-weighted kick, enabled Bosch to score. Soon, a Barker lineout went wrong and the Knox captain got the ball and after a good run he offloaded to Armstrong who scored.

Knox came out after the break with more intensity and punished Barker with two quick tries to go ahead 24-5. One of the them was a remarkable effort that started with an attacking foray by Barker and a three-to-one overlap in the Knox 22. However somehow Knox thwarted this and ran the length of the field in counter-attack to score.

Barker kept on battling on though and with more penalties and a yellow card to the Knox 6 (probably for repeat infringements), the Reds got in good position to score. It became four tries to two—but due to a passionate, over-exuberant post-try celebration, the Barker hooker was also sin-binned !!

But by this time the Knox juggernaut was on a roll. They were controlling the game better and capitalising on errors. Their defence was also effective and they were starting to make more turnovers against a tiring, but still enthusiastic Barker side.

The game opened up bit and Knox scored two more tries, where they showed some good running and backing up. In the end the game petered out in the cold, with Knox still containing Barker even though using all their reserves.

The game was an old-fashioned arm wrestle, more for the purists than the uninitiated. It was a bit of a stop-start affair, not helped by the scrums taking up too much time.

Knox would have been disappointed with the quality of the win. If a six try to two victory could be called ugly, this was it.

Knox started slowly and their coaches would be concerned about the penalties they conceded; however once they warmed up, the result was never in doubt. The side balanced attack with defence and their players supported their ball runners well.

Although they lacked cohesion at times, credit is due to Barker for putting on a spirited display.

Barker should be pleased with their effort. They have improved during the season and what they lacked in size, skill and power, they made up with passion.

They stood up in the forwards and competed well in the loose but they played too laterally and needed to straighten their attack..

Knox – best were Basson, Bosch, Woodcock – and Armstrong, who was outstanding.

(Writers note: Unfortunately I couldn’t see who all the scorers were from my vantage point.)

Cranbrook overpowered a brave but limited St Aloysius side at Rose Bay.

In the early stages of the encounter, Cranbrook established a consistent pattern to its play – something which eluded its opponents throughout the game. The forwards were fast to the breakdown and cleaned out hard to provide quick ball.

The backs, led by 10 Searl, drifted across field before popping a short pass to someone running hard and straight – usually 8 Matters or 15 Stenmark. Clever inter-passing between Searl and Stenmark made space for 13 Renton to open the scoring.

A few minutes later Stenmark burst into the line 25 metres out to create a simple overlap for 11 Gibson. Searl converted, and at 12-0 a blowout seemed likely.

It may have happened, too, but for poor execution. Twice Cranbrook knocked on within ten metres of the line and then some selfish play squandered a three-on-one overlap.

St Aloysius couldn’t win a lineout but eventually forced a scrum near Cranbrook’s line and 13 Slaven forced his way over. Dainton converted and suddenly, at 12-7, it was a close game. But not for long: Searl stepped through three tacklers in a 20-metre run to score: 17-7.

Dainton, who had obviously been impeded by injury and contributed little, then left the field. When play resumed, it was interrupted by a bout of pushing and shoving which resulted in yellow cards for Cranbrook 2 Suriano and Aloysius 6 Partington.

Aloysius adapted better, sending 11 Garnon over in the corner.

After the break Slaven spilled a pass from a scrum near the Aloysius corner, and Cranbrook 12 Lamens scooped up the ball and ran between the posts unopposed. Searl converted – 22-12. Play became increasingly scrappy but Searl created a gap to give Gibson his second try – 27-12.

Cranbrook emptied its bench to give several players some 1st XV game time. Reserve hooker, Smith, had the final say, selling a dummy and scooting 20 metres to score a try which Searl converted.

Flyhalf Searl controlled play with ease despite his scrum half’s tendency to pass the ball above his head. 5 Broekhuisen dominated the lineout (St Aloysius won one lineout all game). THP Pilton was busy around the field.

Outside centre Slaven was a threat whenever he touched the ball and 15 Mazaraki made some clean breaks. No. 8 Nick Hrdina worked hard in a beaten pack.

[Footnote: whoever it is who designs the Aloysius jersey?  White numbers on yellow don’t work! From more than a few metres away, they’re invisible. Blue, maybe?]

Chiefs Kick up a Storm in Capetown
Monday’s Rugby News