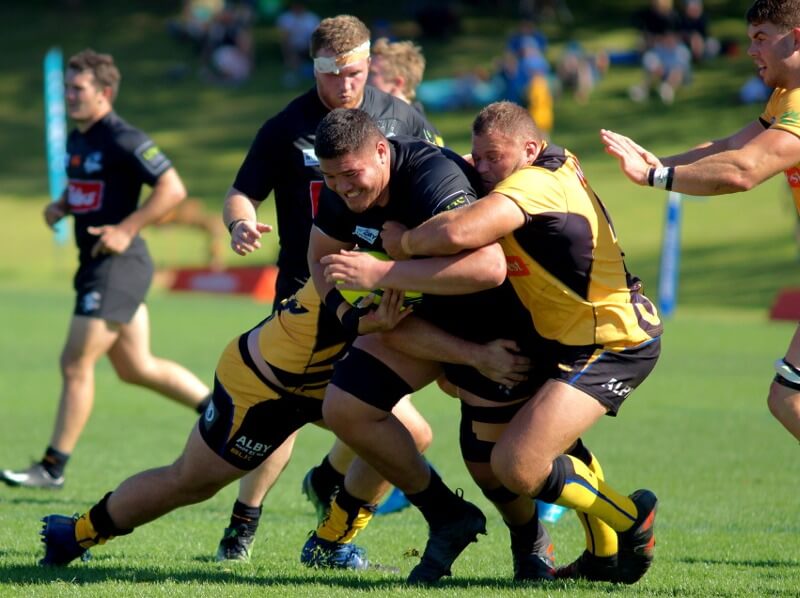 What an afternoon, the day was perfect, and I mean perfect! The playing field surface was a carpet of lawn – just superb – had the local bowls club surface green with envy. (Yes, I did)

The bouncy castles were set up, the food stalls were at the ready, the junior rugby clinics keeping the little ones engaged with the wider playing squad members and rugby development officers, while the parents organized themselves and got seats.

RugbyWA put on an event to be proud of today.

The warm ups had a building intensity with many a discussion in the crowd about how each team looked and what to expect for the game. Crowd coming in (and topping out between 4500 and 5000) and the Hill being Filled. A young child nearby asking why the hill’s name was ‘Phil’ – Gold!

A good, fun game of rugby to be enjoyed by all. Both teams came to play, Western Force came to win, NSW Country Eagles refused to quit.

A fantastic spectacle for the game of Union and thoroughly enjoyed by the home crowd.

Announcements made at the beginning of the game that several last minute changes had been made to both teams. I wasn’t quite quick enough to write it all down – so if I get a couple names wrong, bear with me.

Kick by Force and we are away – little bit of to and fro with a kick over by Andrew Deegan, who is impeded, leading to a penalty. It is kicked to the corner and a hint of a maul is in the air. The ball comes out finds Marcel Brache who slides through and puts it down for the first points of the game. Prior, the captain of the Force outfit and scrumhalf nails the conversion, and we are back at the beginning all within a 2 mins.

NSW Country Eagles almost hit back immediately from the hard running number 12 Will McDonnel– who by plan or circumstance hit the gap at full pace and bagged himself meters, putting the Eagles in a really good attacking position. Scrambling defense from the home side kept the Eagles out.

The Eagles kept hammering and for what felt like a good 10-15 minutes were pushing on the 22m line through multiple phases with the ball going in both directions. Everything Eagles. Jake Gordon spinning the ball and directing the play for the Eagles.

After a while the Force began to exit their danger zone with a lot of the game now happening over the half way line with both teams using the opposition’s right wing flank to spin the ball, get numbers in support and run as hard as they could.

This made for tense but exciting viewing.

A scrum was set directly in front of the crowd just about the half way from which eth Western Force completely monstered the NSW Eagles – Clearly a knowledgeable rugby supporting crowd as the cheer mid scrum was blood thirsty, and there is nothing better that witnessing a good scrum and appreciating the work that both sets of the big boys were putting in.

Shortly after the ball was being put through the hands by the Force to Marcel again who straightened and gave the ball cheeky chip over the Eagle’s rushing defensive line, he chased, the ball bounced favorably and Brache was in for his second of the match at around the 20min mark. Again Prior with the conversion – 14-0 Force. 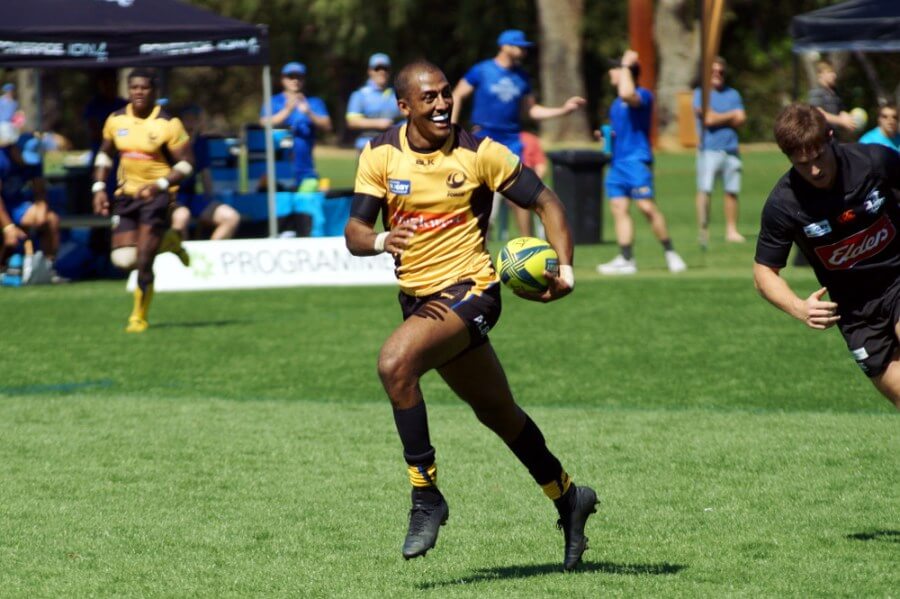 Eagles again with an immediate response in making meters down the left flank of the field only to be stopped just short. The first half was being played at a fantastic pace, with everyone on the hill enjoying the way the game was being played.

Along with Jake Gordon, both Mack Mason and Alex Newsome were giving a very good account of themselves for the Eagles.

For the Force, Chris Alcock and Tevin Ferris were flanking like animals, being  involved in everything and with approximately 15mins on the clock, Tevin Ferris put his hand up again for a carry. The ball coming off a loose line out throw by Tom Horton. Ferris hit the line and ate meters. The ball got swung sweetly through the hands to the big fellow at 14 Masivesi Dakuwaqa for the first of his 2. Again Prior with the sweeteners – 21-0 in what was beginning to look like a hiding, but very much didn’t reflect the game that was being played.

As was becoming the pattern the Eagles went about hitting the defensive line of the Force, grinding meters through multiple phases – again and again and again – showed good patience and build up for a team playing only their first game together.

The ball then got free out the back and behind line close in attack to Alex Newsome who was playing a great game at 15 for the Eagles and went through to open the scoring and Mack Mason adding the extras for the visitors making it 21-7 with 10mins in the half left.

After another good passage of play and some very strong midfield contact from both sides heading towards half time, the Force broke out of their 22 with support and ran the ball, drawing the Eagles defense in before a well-timed grubber through to Newsome who did well to gather and attempt to secure the ball, but had got isolated in the process, and was under pressure from Rod Davies – secured the penalty. A quick kick to the corner and practiced line out move and try to Chris Alcock, and again the kicking skills of Ian Prior for the conversion (he must be good at golf) had the game at 28-7 at the break.

The half time entertainment was good fun, with high ball catching and a field sprint.

The sprint was open to anyone who registered and there was some good pace over the length of a field with senior men being pushed hard by a couple of younger players who looked to be about 12 only a few meters behind. This to be continued for all the homes games for the season.

The second half got under way with the Eagles kicking off, collected by a Force player at the top of a lift, that quickly got Chris Alcock into a position to break the line and find open space, again a simple draw and pass put the big Fijian on a line to scoring  and duly converted 35-7.

With the score line stretching out and the Force with their tails up, the Eagles had 2 options – lie down and die or bring it back with interest. In a fine display of choosing the latter the Eagles came back and through a very slick multi pass move that found Paddy Ryan the Eagles captain on a straightening run through a hole and over the line from about the 22m line, the Eagles had a sniff. Mack Mason with the kick 35-14.

The benches were experimented with at around 10mins into the second half the game slowed while everyone found their rhythm again, and I sat back and watched the game for a bit. 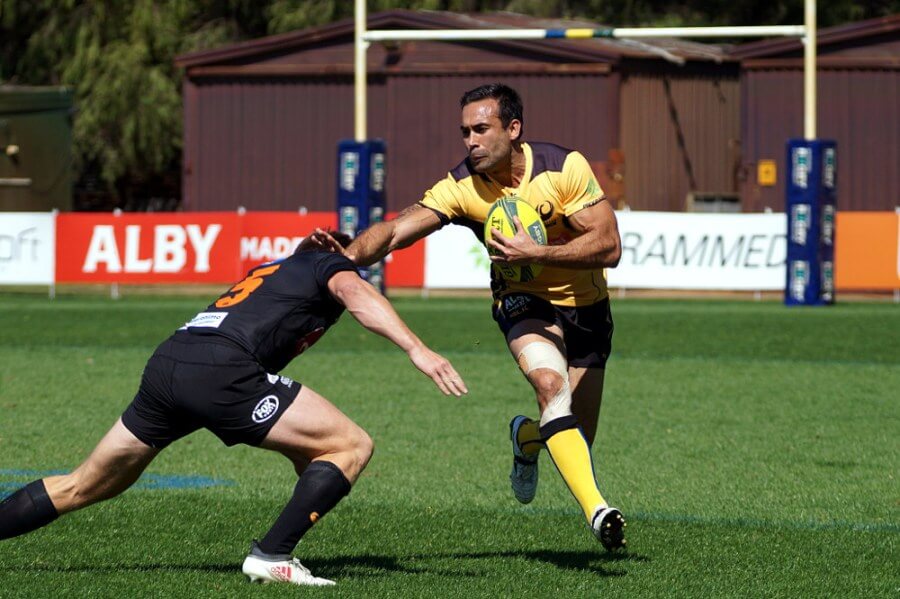 The battle of the 9’s, 10’s and 15’s from both sides was worth watching the match alone.

The tight 5s were busy with their battles and that was evident by some very good contact in the middle of the field as they ran at and into each other.

It stood out that the game management of the Force pairing of Prior and Deegan was very good and this can be reasoned with time spent together during the WSR, but I will say that Gordon and Mason played well and were impressive together.

A couple more changes for both sides as the game went into a holding pattern with both teams attacking up the left flanks and swirling around when the ball was turned over, with well-timed kicks looking to ask questions of both sides.

Alex Newsome and Jack McGregor operated in the wide open spaces of the Fullback position today. The counterattack and the defensive efforts from both were very good and you could do a lot worse than watching this game with young aspiring fullbacks for positional tips.

The Country Eagles refused to roll over and mid-way through the second half had worked their way into a position where through another complex series of passes 13, Seb Wileman ran in the Eagles 3rd try and the conversion made it 35-21.

The last of the reserves got their chance to take the field from both sides, as the afternoon had gotten warm and players were starting to breathe heavily.

All of sudden the NSW Eagles forwards stood up, the 2nd row particularly, Jed Holloway and Tom Staniforth, made themselves known and Jed Holloway went bursting through for his sides 4th try and Mason again with the conversion 35-28.

This score line was more reflective with the game that was being played, and the home crowd started calling for more from the Force and urging them home strongly.

This is exactly what happened and with only about 6-7mins left in the game, the Western Force shut it down strongly.

Freshly on the field Harrison Orr sprinted over – 40-28, this was the only kick at poles missed all day in a fine display from all kickers.

Then Jack McGregor went hard at the line and got wrapped around the neck for his efforts resulting in a penalty try and what looked a yellow to Mack Mason for his troubles.

The clock had wound itself down to zero when the ball got swung wide by the Force for one last attack and in what had been threatening to happen all day “Rocket” Rod Davies found himself with the inch of space he needed and took off like a scalded cat, burning the NSW winger on the outside and put the ball down in the corner on the end of a sprint from the half way line.

A thoroughly enjoyable game of rugby, from which the home side won the right to retain ‘The Horan – Little Shield’ and a game from which the opposition can take plenty of positives. 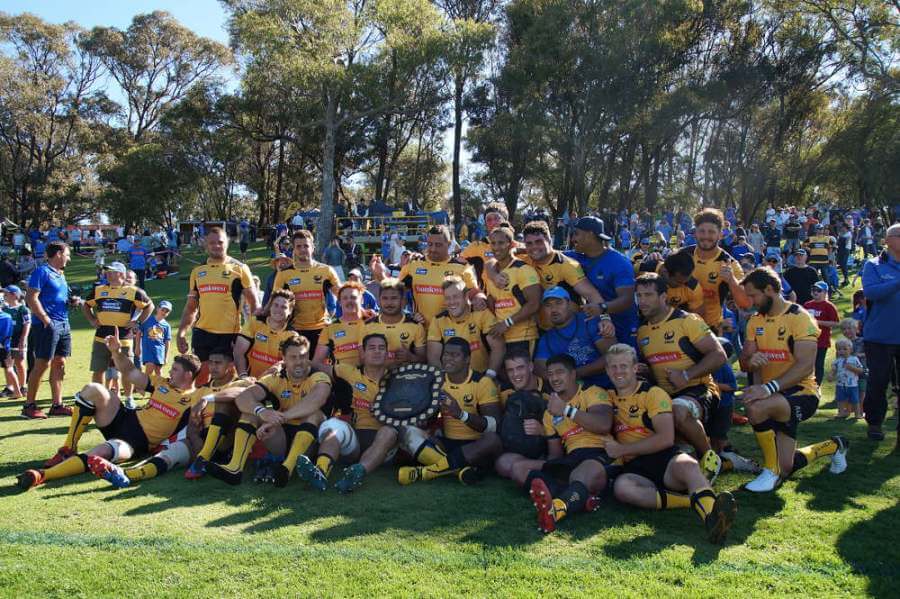 No one moment stood up and said: “Here I am!”  Both teams came to play.

After plenty of deliberation and what was a tight final decision, the Man of the Match award goes to Chris Alcock from the Western Force.

Four players put the hands up today. Mack Mason from the Eagles along with last week’s nominee Andrew Deegan, Tevin Ferris and Jack McGregor from the Force, although recognition must go all of the players listed and a strong case can be made for each.