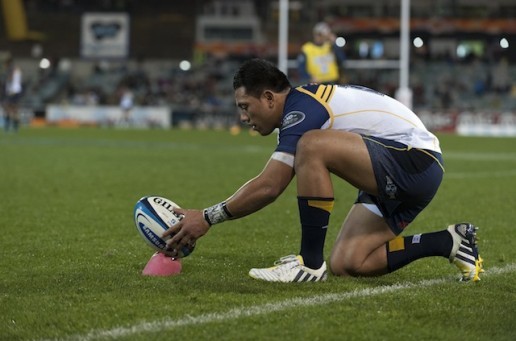 Wednesday’s rugby news has the Brumbies getting healthy, Graham reacting to ref cautions, the Tahs making some changes and Kirwan criticizing the scrum laws.

The Brumbies will have their Wallaby backline paring of Christian Lealiifano and Tevita Kuridrani available for Friday’s clach with the Melbourne Rebels. Kuridrani missed last week’s match after flying back to Fiji for a family funeral while Lealiifano is set to make his return after ankle surgery. It appears that coach Stephen Larkham will inject Kuridrani straight back into the starting line-up, displacing Andrew Smith at outside centre, but Pat McCabe will retain his spot, leaving Lealiifano to make his comeback off the bench.

Larkham may also need to cover the potential loss of Jarrad Butler if the openside flanker does not pass his concussion test. Tuggeranong captain Tim Cree or under-20s star Tom Staniforth are the frontrunners for the position.

Queensland Reds coach Richard Graham has said that he has faith in SANZAR’s processes, despite the controversial decision not to drop Stuart Berry after an atrocious performance over the weekend. Asked if Berry should be refereeing Super Rugby games, Graham said, in a very measured way: ‘That is a decision for Lyndon Bray and SANZAR as they go through their review process.’

Graham  had no regrets about his post-match outcry over the lop-sided penalty count, something he claimed he had ‘never seen in a game before in my life.’ Despite retaining the services of Berry, SANZAR dropped three members from the 18-man SANZAR referees panel on Monday for sub-par last round displays.

Jono Lance to step up

Jono Lance will make his debut for the Waratahs on Sunday, replacing injured fullback Israel Folau. NSW coach Michael Cheika decided not to shift Kurtley Beale to fullback against the Sharks, instead opting for Lance at 15. Strangely, Rob Horne will still get a starting spot, beating Matt Carraro for Alofa Alofa’s run-on wing spot.

In the forwards, Benn Robinson will return to loose-head, with Sekope Kepu shifting to 3 and Paddy Ryan relegated to the bench. Wycliff Palu will also return to the starting no.8 position, with Dennis moving to 6, and Potgieter back to second-row. These movements have forced Cheika to bench lock Kane Douglas.

Sir John Kirwan has urged SANZAR and the IRB to immediately sort out the the game’s scrum issues, calling for a trial law change mid-competititon. The proposed change was quite simple, with Kirwan asserting, ‘Above us they need to make a decision and let the halfback put the ball in without the call from the ref. It’s as simple as that.’

The Blues coach emphasised that the need to babysit the halfback’s put-in is taking up too much referee focus. There also remains the issue of the defending scrum loading up to take advantage of a hooker’s strike.