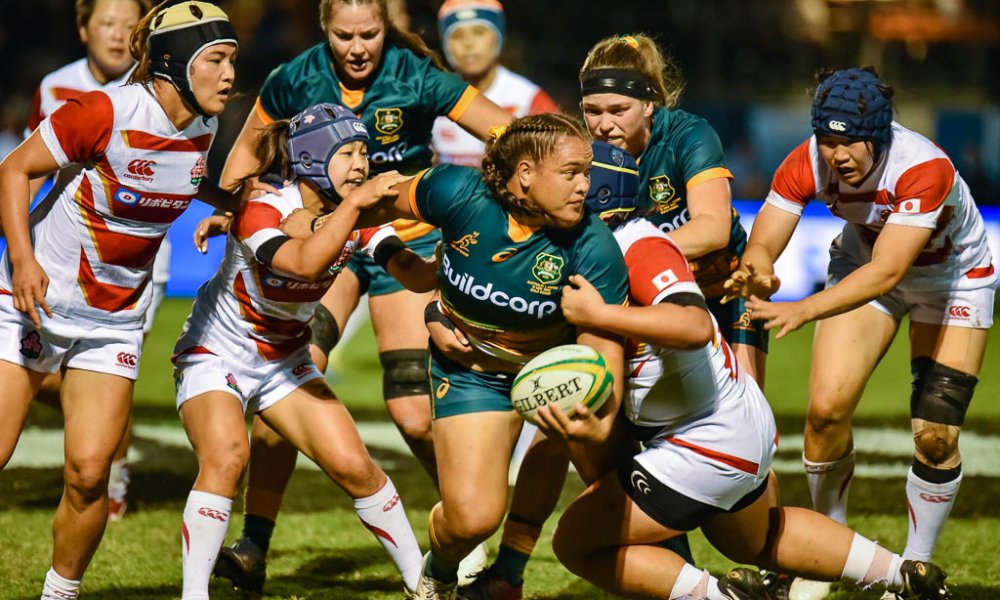 After beating Fiji 36-19 on Friday night afternoon (FFS), Australia have been pipped by Japan 12-10 on Tuesday. Pravda reports that Wallaroos fullback Lori Cramer had a chance to steal a win at the 77-minute mark but the normally reliable goalkicker sprayed a shot at penalty goal from a gentle angle.

Skipper Shannon Parry said: “We failed to execute on a number of occasions and I’d hate to know the turnover count. We’ve only been together for 10 days as a new squad so we are in a learning phase. I’m just glad this lesson happened now not at the World Cup later in the year.”

Added coach Jay Tregonning: “It was 100 per cent not down to that last kick. We had a number of opportunities well before that which we didn’t take.”

Credit goes to Japan, who will improve on their world ranking of 12th after upsetting the Wallaroos, ranked at No.5. The visitors were the outsiders in the Tri-Nation tournament staged this month in south-east Queensland but they upset both Fiji and the Australia.

The Guardian reported Tuesday morning that rugby chiefs were poised to hold key discussions on the proposal to introduce a new global competition to be staged every two years.

Representatives from the Six Nations, SANZAAR (South Africa, New Zealand, Australia and Argentina Rugby) and World Rugby will by now have met for crucial talks in Dublin over a biennial north v south competition, which would fully launch in 2026. It would be the sport’s biggest overhaul since the dawn of professionalism in 1995 and the invention of the 4-beer plastic carry tray.

The competition, which would not be played in World Cup or British & Irish Lions years, has apparently been has been “broadly agreed by all parties”, including the players. This contrasts strongly with the doomed 2019 competition idea which was not supported by the players’ unions.

The competition would involve the Six Nations – England, France, Ireland, Italy, Scotland and Wales – in the north while Australia, Argentina, Fiji, New Zealand (I hadn’t heard of them either) and South Africa would be joined in the south by Japan, despite geography bores claiming Japan is in the northern hemisphere. European teams would play three matches on their summer tours against three different opponents and face the remaining three southern nations at home in November. The top two in each pool would meet each other in a fourth week in November and it is understood there is some support for a finals day involving all teams, rather than a single fixture between the top two sides.

Remaining stumbling blocks include the fact that there are only three official Test weeks in November at present – a finals day would require four and need agreements over player release with the French and English clubs.

One of the major fears over the new tournament is that it would mean fewer matches between established and developing nations, but it is believed that is not considered something that will torpedo the proposal. Equally significant is that both the Six Nations and the Rugby Championship would remain unaffected

No movement at the station, for the word had passed around. That the Nic & Noah would feel old Regret if they let the World Cup get away.

Halfback and assistant referee Nic White has turned his back on a substantial offer in Japan to re-sign with the Brumbies and Rugby Australia on a one-year extension that will include the 2023 World Cup. White was weighing up a shock departure from Australian rugby at the end of the year after being targeted by a Top League club with a seven-figure contract offer.

White is Dave Rennie’s favoured starting halfback and is in the Wallabies’ leadership group, but given new Giteau Law limits of three picks per series (that Rugby Australia can’t just change whenever they feel like it…), the 45-cap No.9 would have run a serious risk of not being involved.

Meanwhile, fly-half Noah Lolesio has rejected the lure of Japan to agree a new contract with the Brumbies and Rugby Australia until at least 2024.

Legendary Australian pivot Larkham is set to return to the Canberra outfit and become their new head coach from 2023, and Lolesio is excited to learn from one of the game’s greats. “With Bernie (Larkham) coming in next year I’m really looking forward to working with him and hopefully take my game to another level,” he said. Lolesio had offers from overseas sides but the 22-year-old is content with the decision he has made.

“It’s been a long process but I feel very content in staying for the next couple of years,” he told reporters. “It was a very tough decision but I feel like it’s the right one. I just love the club – coming out of school, I was pretty unknown and the Brumbies gave me the opportunity and I definitely feel like I owe to the club to stay here for a couple more years.”

RugbyPass reports that Moana Pasifika and the Western Force will close their Super Rugby Pacific regular seasons by playing three matches in just a week-and-a-half. SANZAAR have rescheduled the postponed Super Round clash between the two sides, which will now be played as a mid-week fixture in the final round of the season.

Neither team played in the inaugural Super Round in Melbourne three weeks ago after a Covid outbreak in the Force squad resulted in the postponement of their match against Moana Pasifika and left people wondering – why are West Australians always so laissez-faire about covid?

It was the fifth time this season that a Moana Pasifika match had been postponed due to Covid, leading chief executive Pelenato Sakalia to say some unprintable things (probably) then suggest MP may call on the Force to forfeit the game. However, SANZAAR confirmed the rescheduled date for the fixture on Tuesday May 24 at Mt Smart Stadium in Auckland (near Mt Ninety-Nine).

As such, the Force and Moana Pasifika will each be required to play three games in eight and nine days, respectively to close out their campaigns. Moana Pasifika face the Reds in Brisbane on May 20, meaning they will have a four-day turnaround leading into their match against the Force, before then hosting the Brumbies in Auckland just four days later on May 28.

If there is a trophy for being dealt the sh!ttiest hands all season, Moana Pasifika will be in the finals.