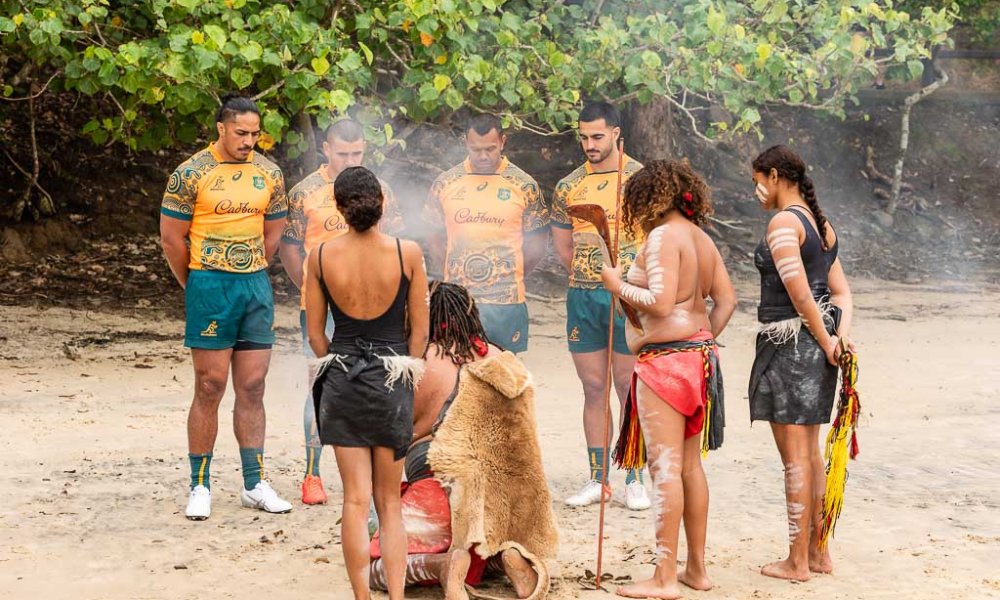 With the international season back on there is more rugby news than you can poke a forky stick at. Reece Hodge comes into the Wallaby squad, Cooper looking shaky, Kerevi called-up up for Commonwealth Sevens and the Brisbane First Nations game.

Reece Hodge summoned from Australia A to cover for Tom Banks

Rugbypass reports that the Wallabies have called experienced utility back Reece Hodge into their squad as injury cover for Tom Banks ahead of this week’s second test against England in Brisbane.

Banks was taken from the field during the first half of Australia’s series-opening win over the English in Perth last weekend after he broke his left arm while contesting a high ball.

In a social media statement released on Tuesday, the Wallabies confirmed that Banks has undergone successful surgery on his arm and that we can rebuild him, we have the technology.

Hodge, a 54-test international who can cover virtually all positions across the backline bar halfback, will compete with Jordan Petaia, James O’Connor and Andrew Kellaway for the vacant fullback role.

Cooper to miss Test 2, not looking great for Test 3

The Sydney Morning Herald reports that Quade Cooper will miss Australia’s second Test against England in Brisbane and is highly unlikely to take part in the subsequent dead-rubber due to the calf injury that ruled him out of the Wallabies’ first clash of the year on Saturday.

Cooper had scans on his calf on Monday and a source known only as “Brisney Spears” has told the Herald the 34-year-old is expected to spend two weeks – and possibly longer – on the sidelines. “Brisney” also told reporters “My loneliness is killing me (And I) I must confess, I still believe (Still believe) When Quade’s not at ten, I lose my mind. Give me a sign. Hit runners with a freaky pass, baby, one more time.“

Given his age and the type of injury, the Wallabies don’t want to rush Cooper back given they have an important Rugby Championship campaign coming up.

Prop Allan Alaalatoa is expected to miss the second Test due to concussion protocols, while Darcy Swain is will have faced his disciplinary hearing on Tuesday night.

Prop Taniela Tupou will be available for selection after recovering from a calf injury. Yippee Ki Yay Mother England.

Rugbypass reports that Fijian-born wrecking ball centre Samu Kerevi has been included in the Australian men’s sevens squad for the Commonwealth Games later this month. A year after he shone for Australia at the Tokyo Olympics, Kerevi is again the headline name in Australia’s 12-man squad as they chase gold in Birmingham at the end of July.

Kerevi will be accompanied in Birmingham by Waratahs flyer Mark Nawaqanitawase, who is currently part of the Australia A set-up in Fiji for the Pacific Nations Cup.

Whether Kerevi’s selection in the Australian sevens squad will impede on his Wallabies commitments remains to be seen, although the men’s sevens tournament at the Commonwealth Games begins on July 29 and ends two days later.

No Wallabies tests are scheduled for that weekend, although their first test of the Rugby Championship is scheduled for the following weekend, when they will take on Los Pumas in Mendoza on August 6.

Nathan Williamson reports that it was Kerevi’s stint at the Olympics that brought Kerevi back to Australia, opening the door for an eventual call-up for the third Bledisloe Test against New Zealand, with Sevens coach John Manenti revealing the importance wasn’t lost on the centre.

“He was very grateful for the opportunity he was given to come and play for the men’s Sevens team and off the back of that played his way into the Wallabies and being in Australia at the right time,” Manenti told Rugby.com.au.

The Australian women’s side, meanwhile, will be aiming to go one place better than their silver medal placing on the Gold Coast four years ago after crashing out in the quarter-finals of last year’s Tokyo Olympics.

Nathan Williamson reports that the Wallabies will wear the First Nations jersey and sing the national anthem in Yugambeh language as part of the second Test in Brisbane.

It comes ahead of NAIDOC week, marking the first time the side will wear the new 2022 edition of the jersey, which is predominately gold with the design created by Kamilaroi and Gamilaraay man Dennis Golding.

The side will also sing the Australian national anthem in the Yugambeh language, joined by the Yugambeh Youth Choir.

This will recognise Uncle Lloyd McDermott, the first Wallaby to identify as a First Nations man, signing in the language from his country around the Tweed River basin.

Lloyd McDermott was the second Aboriginal person to represent his country in rugby union, after Cec Ramalli. He refused to participate in a 1963 tour to South Africa, objecting to being classified by the hosts as an “honorary white“. Lloyd McDermott became Australia’s first Indigenous barrister.

“As a team, we’re extremely proud to be able to celebrate NAIDOC week by wearing our First Nations jersey and singing in Uncle’s language on Saturday night in Brisbane,” Wallabies coach Dave Rennie said.

“We put a lot of time into understanding who we play for and who we represent and the privilege to play for our country and our people isn’t lost on us.”

“It is amazing to see my Dad recognised in this way, his impact on Rugby was profound and continues today through Lloydies (Lloyd McDermott Rugby Development Team),” Phillipa McDermott said.

“This means so much to our family and Dad would be honoured.”