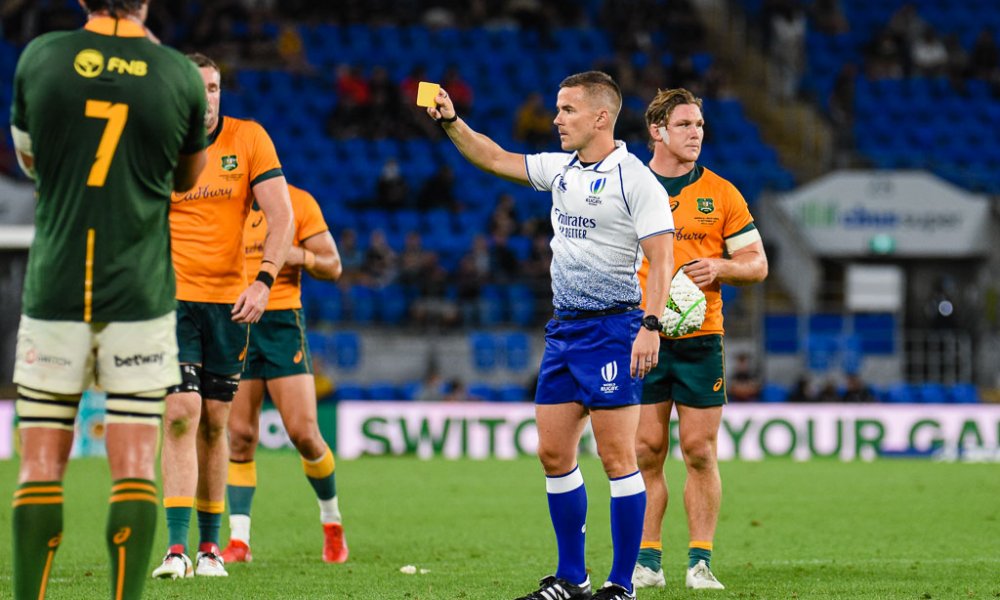 Good morning fellow G&GRs This will be my last post of the year, unless something happens over the next few months that I get upset or enthused enough to write about. Thanks for all the support this year I’ve enjoyed doing these posts and sorry if some of my comments have not always been what you, or some of you, have wanted to hear. That’s the great thing about a site like this, it’s full of opinions, and while in some ways opinions can be like arseholes in that we’ve all got one but don’t often feel the need to share them, this has been a great place to have a chat with (mostly) like minded individuals and demonstrates again just what a great game this rugby can be. Seeing as it is my last post I’ll look at some of the refereeing decisions that occurred in the game against Wales and add my perspective to them.

Sorry Dave. You got this wrong

So the frustrations that Dave Rennie have had all season have finally come to the fore with both a public whinge and a formal complaint against the refereeing that the Wallabies suffered during the Northern Tour. Rennie’s main gripe was with Jonker, who made a critical call against the Wallabies when he intervened to issue Allan Alaalatoa with a yellow card – and disallow a subsequent Michael Hooper try – in Australia’s two-point loss to Scotland a fortnight ago that World Rugby later called wrong. To add to this he then made what has been described as a dubious decision that helped turn the game, this time supporting the call of referee Mike Adamson to award Nick Tompkins’ try after an action which looked similar, if not worse, than a deliberate knock down that sent Kurtley Beale to the sin bin.

Now I personally have a few issues with what Rennie has done. In the main my concern is that while not launching a public Erasmus style video, he is undermining the game and giving his players tacit approval to question the referees in the future. I get that he was frustrated but what he did is not going to resolve his frustrations which I feel were as much with his players (or should have been) as they were with the referee team. On another note seeing as how Cheika has come out in support of Rennie I feel that’s another point that clearly demonstrates what he did was wrong. Maybe that’s just my bias against Cheika coming through though.

Dave Rennie himself came out in support of Nic Berry after the ruling against Erasmus and now has done basically the same thing just without naming individual names. Pretty dumb as everyone knows who he’s talking about and it’s not like there is a lot to choose from.

I find it sad as I think DR is doing some good things with the Wallabies. To come so close in this game, and even be in the lead right until the end, after playing for most of the match with 14 players was a damn good result and I think Rennie himself has contributed to this being over taken by complaints and issues that isn’t helping the game and won’t help it here in Australia.

I will now look at explaining the events that triggered Dave’s rant and explain how I saw them from a referee’s perspective (well mine anyway).

AAA YC. Firstly I don’t agree the decision against AAA was actually incorrect. While the contact to the head was absolutely minimal and probably didn’t deserve a YC on it’s own, the fact that his feet left the ground as he launched himself into the opposition meant he was never in control of the incident and was placing both the opposition and himself in a dangerous place. I think he deserved the yellow for that piece of stupid play alone.

Beale’s YC. I actually feel Beale was hard done by here. My impression was that he was going for a tackle and the ball hit his arm as much as he hit the ball. The TMO made a big deal about his eyes watching the ball but I think that was a slow motion issue more than anything. Now – as most of you know – I don’t like Beale and didn’t think he should have been included in the squad let alone given game time. To me he is a selfish, self entitled person who embodies everything that was wrong under Cheika, however I think he was hard done by in this decision.

Tompkins Try. Sorry team but this is a decision that was absolutely correct, regardless of how it seemed to look at the time. There has been a lot of posts about this and most of it unfortunately has been by people who don’t know the laws of the game and are making incorrect statements. I’ll try to explain it using the laws and as I interpret them.

Firstly, The slap down of the ball is not actually an offence in itself even though some people have been saying that it is and therefore the try shouldn’t have occurred. The actual offence that people who have been punished for slapping down a ball is Law 11.3 A player must not intentionally knock the ball forward with hand or arm. Sanction: Penalty. The important word here is forward. This means towards the goal line he is attacking – nothing else. If the ball does not travel forward from the hand towards his goal line then no law has been broken. We see this a lot where players will slap a ball back while in the air contesting a kick, in a lineout and even stopping a ball going out of play. Most of those just look a lot clearer than the incident on Saturday.

Further to this Law 11.4 says it is not an intentional knock on if there was a reasonable expectation that the player could gain possession (not relevant in this case although people have used versions of that to say why the try shouldn’t have been scored). If this had been the case then the referee would need to decide if he felt the player could have recovered the ball. Note for the future, nothing about 1 hand or 2 being used or the ball being hit up or down. It is purely on the referee deciding if he felt there was a reasonable expectation that the ball could have been gathered up.

Unfortunately for the Wallabies, despite how it initially looked, the referee judged the ball had gone backwards (Law 6.5.a says he was correct) and therefore there was no deliberate knock on and no law being transgressed. While at the time I was dubious, and a lot of the Wallaby supporters still are, sorry but that doesn’t actually matter. The referee adjudicated that it hadn’t gone forward and so it was correctly play on. There’s no law that says if the players on either team stop because they think something else had occurred then play must stop. Play to the whistle team – it’s something drilled in from the start and something where the players absolutely failed.

Now I don’t expect that everyone will agree with me here and I’m sure there are other incidents that people will bring up to demonstrate how the Wallabies were hard done by.

I will add two more points. Rugby is a dynamic game with a lot happening at any one time. Referees will often be in a different position from the supporters, cameras and viewers and so will see a different picture. This means they will likely rule on something that we don’t understand. That to me is something we need to be more accepting of rather than complaining that the referee got it wrong.

In addition, a lot of calls could go either way in most games. From personal experience it is very hard to be completely neutral in these decisions when a team has caused me issues, continually questioned my decisions or just pissed me off. I think a lot of the Wallaby issues have come about because Hooper has not engaged the referee the right way or because they are sick to death of White’s actions in throwing his arms up and whinging all the bloody time. This has meant that some decisions that could have gone with the Wallabies just haven’t and I think a public rant by Rennie will only add to this being an issue in the future.

Regardless of all this it’s still a great game with great people and a lot of fun. Have a safe and happy Christmas and New Year and I’ll see you in 2022