Waratahs Produce Comeback for the Ages 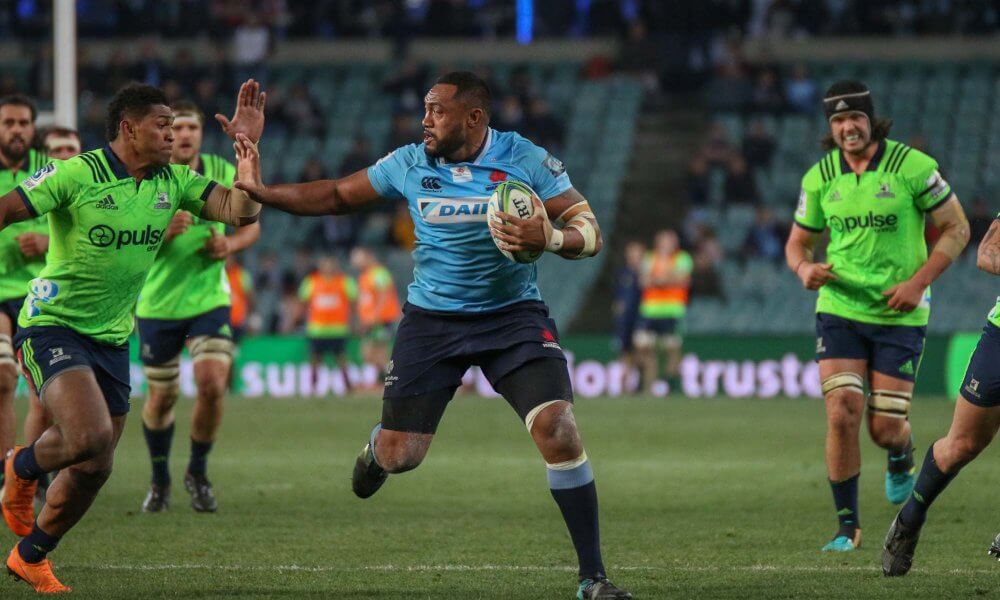 Waratahs Produce Comeback for the Ages

The Waratahs settled into the game well and it appeared that the disastrous start against the Brumbies a week ago was a distant memory. An early attacking raid resulted in a penalty and Foley put the home side ahead 3-nil. A quick reply from the Highlanders levelled the scores but from the ensuing kick off Michael Wells forced a penalty at the breakdown and the Waratahs regained the lead.

That composure only lasted 10 minutes however as the Highlanders seized on some average defence from the Waratahs backline and put Waisake Naholo into space. A valiant tackle from Nick Phipps wasn’t enough to stop Naholo dotting the ball down in the corner for the first try of the match.

What we saw from there was the Highlanders steadily deconstructing the Waratahs defence. Against the Clan’s star studded backline the Waratahs were always going to have to be on their game defensively but instead they were disjointed and were working independently. Players rushing out of the line, overcommitting and left clutching at air were frequent events as the Highlanders produced most of their six linebreaks for the match. 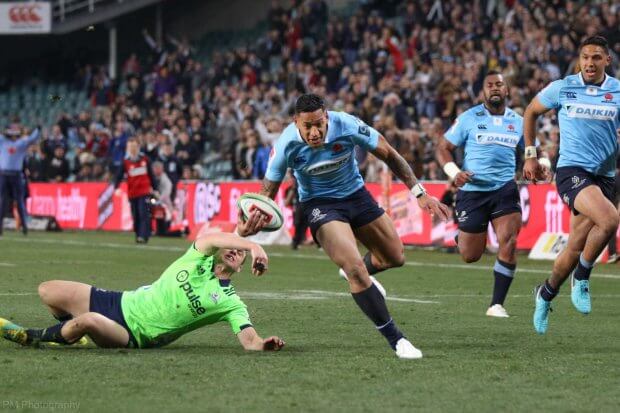 After another Sopoaga penalty the Highlanders extended their lead to 14 with a brilliant change of angle from Rob Thompson who fed off a well timed pass from Teihorangi Walden to scythe through the Waratahs defence and score under the posts.

A further penalty to Sopoaga had extended the lead to 17 and it seemed like the Waratahs were thinking about their fancy dress outfits for Mad Monday. The only player whose mind was on the job it seemed was Nick Phipps. Perhaps that was because he’s had his fill of dressing in a cow suit this season but he didn’t give up and after poaching a loose ball he kicked into space and then forced a penalty to give the Tahs a chance to launch a comeback. Phipps was clearly fired up and looked to instill that fight in his teammates but that moment of excitement quickly deflated when the 5 metre lineout was butchered and the pressure released.

The Waratahs lost Michael Wells at the half hour mark after his head collided with Luke Whitelock’s hip whilst making a tackle and was knocked out. Despite the stretcher and Medicab being called onto the field, Wells eventually got to his feet and walked off under his own steam.

23-6 at half time and most fans were considering which pub to down their sorrows at after the game. The Waratahs were hopeless and at this stage it seemed like they’d be hard pressed not to have a big score put on them in the second half.
Rugby can be a funny game though…

At this stage, Waratahs fans were hoping that the team could show a bit of fight in the second half and not finish the season getting flogged at home. The way the Highlanders were playing that seemed like hopeful more than likely.

The Tahs got close after Foley kicked through a lose ball but Holloway was bundled into touch 5 metres out. After Sopoaga cleared, Ned Hanigan produced a boneheaded moment by bumping himl late and presenting the Highlanders a penalty from the spot the kick landed, 30 odd metres out. Another instance where the pressure was released with barely a whimper and the Highlanders again had the Waratahs under pressure.

With the Waratahs defending on their own line, Taqele Naiyaravoro plucked an intercept out of the hands of Ben Smith and ran 50 metres before being dragged down. A few phases later, Kurtley Beale offloaded to put Sekope Kepu into space and the big fella pinned his ears back. A big right foot step beat the first high tackle from Naholo and the try line beckoned 25 metres away. Naholo had another crack and brought Kepu down with an arm around his neck. A second high tackle in the space of 15 metres was an impressive feat and Angus Gardner rewarded him with a yellow card for his efforts. 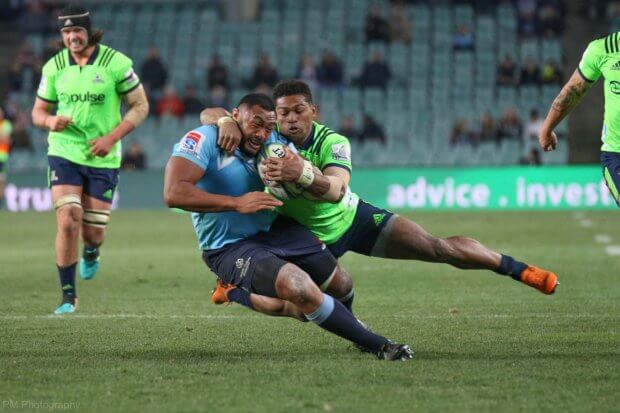 If there’s one thing the Tahs have shown this season it’s that they know how to score points against 14 men and thankfully, tonight they produced their best. In 10 minutes the match was turned on its head. Beale started to take control of the game and a step off his right stood up the defence and then an offload in contact to Foley on his inside put the Waratahs over under the posts to commence the comeback. The Tahs had a pulse.

Momentum can be a funny thing in sport and all of a sudden the Waratahs were unstoppable. A sloppy lineout from the Highlanders presented a loose ball which Nick Phipps raced towards and dived onto. A skilful regather and a quick clearance from acting half Rob Simmons had the Waratahs with front foot ball and numbers to the left. Beale again sparked the break brushing off Walden before drawing Tevita Li and putting Israel Folau over for the Waratahs second try. The heartbeat was getting stronger.

Right about now, Waisake Naholo must have been getting itchy feet on the sideline. His high tackles might have given the Highlanders a short reprieve but his absence was now being sorely felt. What’s more, he still had another 4 minutes left in the naughty chair.

A steady buildup saw Folau step back inside to make the break. He linked up with Phipps who then made the last pass to Foley and the Tahs were in again. 21 points in 10 minutes and all of a sudden the Waratahs had the lead. Hearts were pounding now.

The Highlanders had plenty of attacking ball in the last 20 minutes and the guts shown by the Tahs defending in their red zone was incredible. Players who had fallen off tackles in the first half were making try saving tackles. Special mention must go to Alex Newsome who produced some phenomenal defensive efforts.
With 10 minutes left Foley kicked another penalty and the lead was extended to 7. Could it really happen? The crowd found their voice and the chant of New South Wales, New South Wales rang out from the small but vocal crowd and it did seem to lift the team in defence. 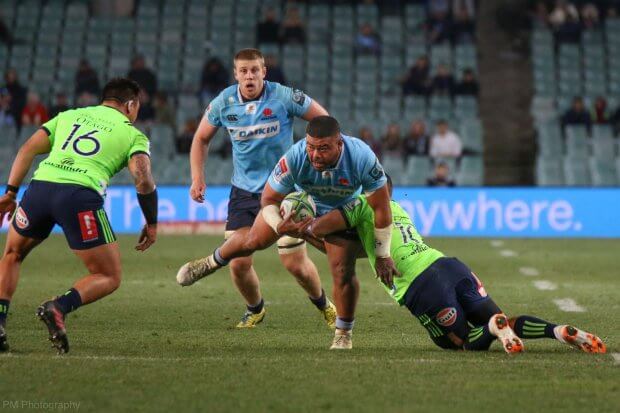 Shannon Frizell went ever so close to scoring but after Paddy Ryan grabbed the loose ball whilst both on the ground and in an offside position, it seemed like awarding the try might have been better for the Tahs. 7 minutes to go, a penalty 5 metres out and a 7 man scrum to try and hold back the Highlanders pack seemed like bad odds for the home side.

Some remarkable efforts by those 7 and Kepu who had to retake the field and pack some crucial scrums. The scrum held firm and the backline defence was admirable. Again the Highlanders onslaught was repelled and hope began to build. Try as they might, the men from Dunedin couldn’t find a way through the Tahs suddenly staunch defence and when the siren rung with the ball in Jake Gordon’s hands, he booted it into touch and the Waratahs was ecstatic.

An unbelievable second half sore the Waratahs score 24 unanswered points and produce a memorable comeback. The Tahs would live to fight another day and they would be packing their bags and jumping on a flight to Johannesburg to face the Lions in the semi finals.

Waisake Naholo might have prevented Sekope Kepu from scoring the Waratahs first try but his yellow card could hardly have been more costly for the Highlanders. 21 points in 10 minutes and the Waratahs took the lead and never lost it.

Nick Phipps showed his teammates how to fight but Kurtley Beale was the one who got the attack ticking and blitzed the Highlanders. Beale by a nose.

It was the Waratahs key Wallabies who won them the game. Beale, Folau, Foley and Phipps produced their best when it was needed. 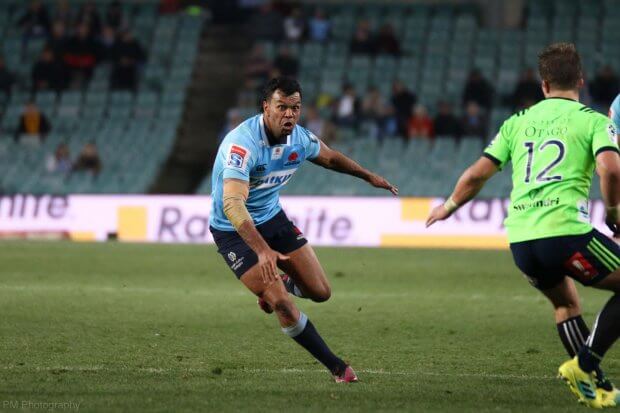